As If!: Amber Benson and Sarah Kuhn Bring the 90s Back to Comics in Clueless: Senior Year 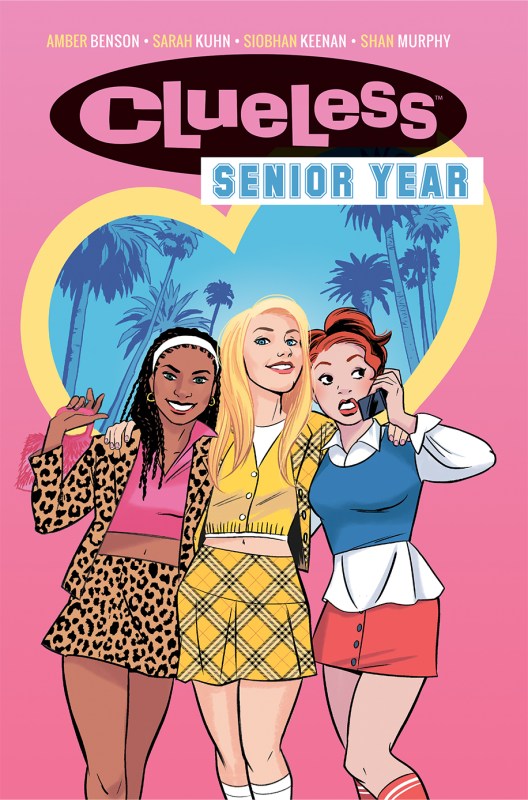 Clueless, the 1995 Amy Heckerling film starring Alicia Silverstone, is a modern-day classic and one of the best examples of an incisive, funny, well-crafted teen movie. If only we could revisit the world of Clueless but, like not as a reboot? More like a continuation of the story where the movie left off? Oh, we can? There’s a graphic novel from BOOM! Box doing that very thing? OK, well awesome! 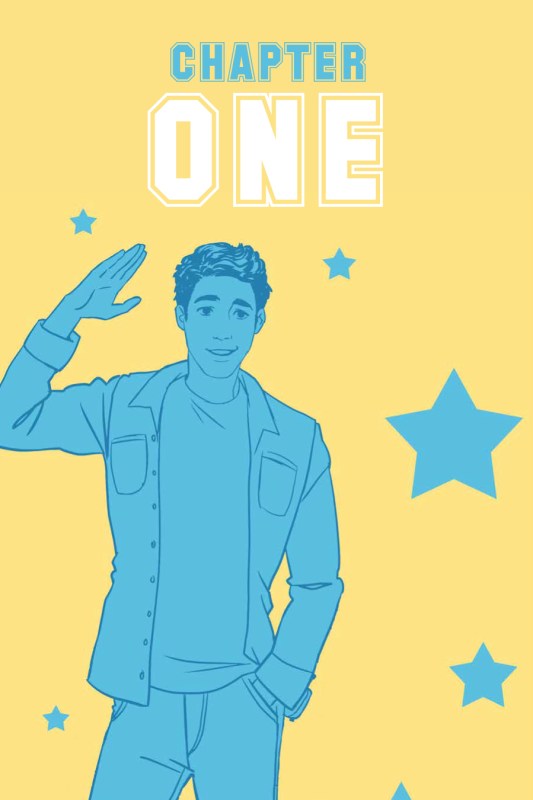 Clueless: Senior Year is a wonderful read, and whether you’re a huge fan of the original film (like I am!), or you’re just looking to read a heartwarming and fun new graphic novel featuring great, young female characters that just so happens to have been delivered by a mostly-female creative team, you will love this book.

It isn’t just a retelling of the movie in comic book form. It’s a continuation of the story that explores what our favorite besties are thinking about doing *gasp* after high school.  Ever wonder what ended up happening with Cher and Josh? Or what’s going on in Dionne’s life when she wasn’t with Cher? Or whether Tai’s changes ended up sticking? Clueless: Senior Year answers these questions and more in a super-sweet, funny, and progressive way that unabashedly puts the feminine first.

Also, it features track lists for a couple of pretty sweet mixtapes.

In addition to getting some beautiful preview pages from BOOM! Box to share with all of you (which you’ll see throughout this piece), I had the chance to speak with Senior Year writers Amber Benson and Sarah Kuhn about why they needed to revisit the world of Cher, Dionne, and Tai, and what this book can mean to today’s comic readers. 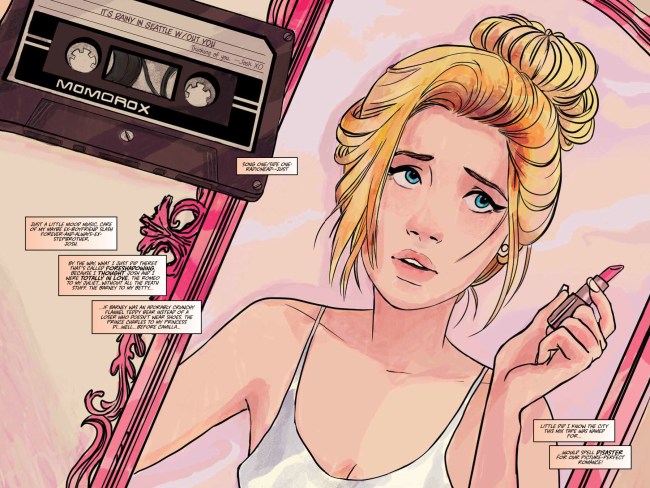 Teresa Jusino (TMS): Why Clueless, why now? What made each of you need to say yes to this project?

AMBER BENSON: I think everyone was really excited about the 20th anniversary of the film, so when BOOM! approached us to be a part of the celebration, it was a no-brainer. Plus, getting to play in a universe that has a high nostalgia factor for both us was awesome. We really wanted to make this an ensemble piece where we could explore the friendship between Cher, Dionne, and Tai—something that is key to why the film works so well. It was important to us to make that friendship front and center in our story, too, and once our fantastic editorial team was on board with that concept, we just ran with it.

SARAH KUHN: We both adore Clueless. And when we started pitching stuff out—the idea of incorporating themes from other Jane Austen works, the idea of spotlighting the three girls, the whole thing with using the mix tapes that appear throughout the book to set the tone and make it feel like a more cinematic experience—everyone was so excited.

One visual thing I remember that made us all go, “Ahhh!” was the idea of having a couple splash pages that evoke those old-school Katy Keene comic book paper doll pages, where she has all her different fashions and accessories, but the page also conveys other important information about the character. It was like this rolling ball of excitement that just kept building until it was, like, a mega-ball. This is a very dorky metaphor, but I’m just going to go with it. Anyway, that level of excitement from everyone made it very easy to say yes. 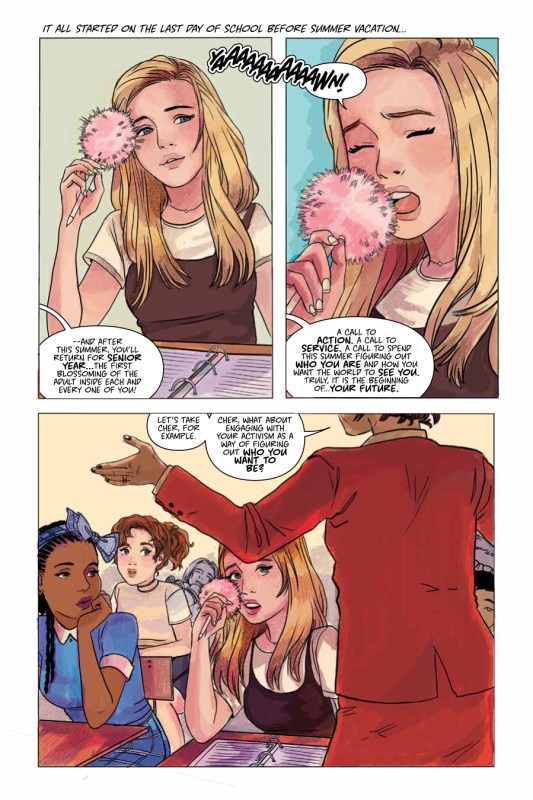 TMS: What’s your personal relationship to Clueless? What do you love about it?

KUHN: Well, it’s really one of my favorite movies of all time. I’ve watched it continuously throughout the years and have always considered Cher and Dionne to be personal heroines. Amy Heckerling, the writer and director of Clueless, is such a genius, and she captured this fully-realized, specific world and made it so vibrant and fun.

I also love that Cher—like Emma Woodhouse before her—has this totally single-minded drive to find projects and missions and complete them no matter what. She’s the kind of heroine that people tend to dismiss or underestimate because, I don’t know, she’s bubbly and positive and likes clothes? And she is all those things, but she’s also an undeniable, unstoppable force of nature. I love that she’s allowed to be all those things and they all contribute to her general awesomeness. And I also love that—again, like Emma—she makes mistakes in her journey; she’s not perfect. But she’s still a badass heroine. I will fight anyone who disagrees.

BENSON: I’ve re-watched the movie many times in the last year and I am blown away by how smart and biting it is. There are so many layers that you miss when you only watch it once or twice. On repeat viewings, you discover just what a sharp tongue Amy Heckerling possesses. 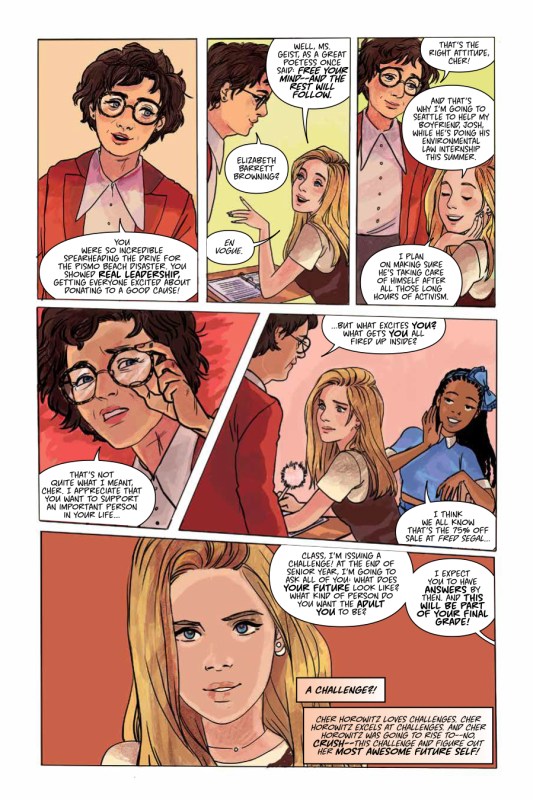 TMS: I love that this focuses on all three girls, rather than just Cher. Whose story were you most looking forward to getting back to, or exploring more?

KUHN: I was excited to get into Dionne’s story, to really explore her and give her a section where she gets to be the protagonist, the center of the story. As a woman of color, it was really important to me that she and Summer, played by Nicole Bilderback, existed in the movie and were obviously really cool girls who were part of the central cool girl crew. I always loved how ferocious and funny she was and I always wanted all her crazy hats. And even though Clueless, the movie, has a very distinctive overall voice, her voice is still different from Cher’s. So, it was a joy to give her a full story—where we hear her voiceover and get her take on things and Cher is kind of her sidekick. I also loved choosing her songs for the mix tape, because for some reason I always thought Dionne and I would have the same musical taste.

BENSON: For us, the friendship between Cher, Dionne, and Tai is what we were excited to explore. So often, female friendship gets short shrift or is used only as a way to have exposition about romantic entanglements the characters are in. We really wanted to show that their friendship was about being there for each other and helping each other change and grow.

TMS: What was your collaboration with Siobhan like? What was it about her art that made you think that she “gets it?”

BENSON: It was clear right off the bat that she understood what we were going for; the first stuff we saw from her just nailed it. I think our editor, Shannon [Watters], and the rest of the BOOM! editorial team really got it and they intuitively knew that Siobhan was the right person for the gig. Our colorist Shan Murphy, our letterer Jim Campbell, and Natacha Bustos, who did our cover, killed it, too. We just had a kick-ass team. We were extremely lucky on this project. 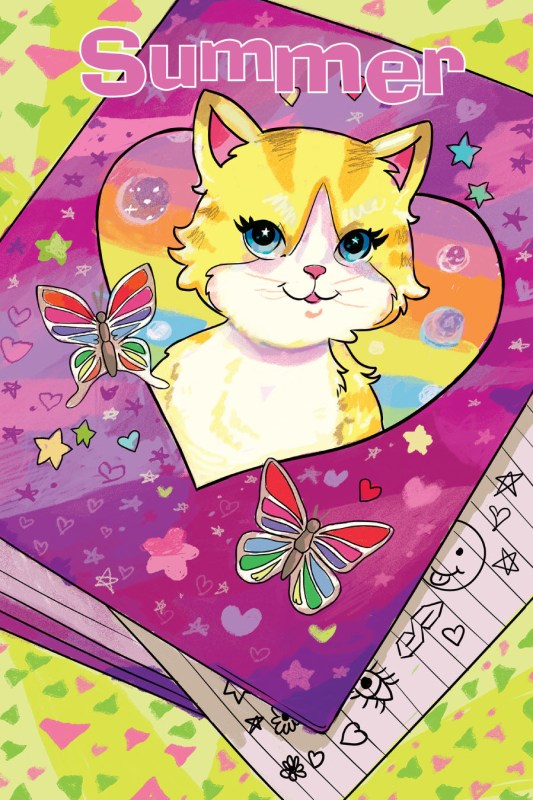 KUHN: Yeah, Siobhan and Shan really brought the story to life in this fresh, vibrant way that feels new but is still undeniably Clueless. One of my favorite pages is the splash page of the Lisa Frank-esque binder with the cat on it—I think we actually said in the script, “This should look like a Lisa Frank binder,” and they totally nailed it. I love how expressively Siobhan draws characters’ faces—you can really feel what they’re feeling. And then Shan’s colors bring out those specific moods even more.

TMS: What will Clueless: Senior Year have to offer both fans of the original film, and newer graphic novel readers to whom Clueless is a “classic?”

KUHN: I feel so old, hearing it described as a “classic”! Kind of the same feeling I get when I hear ’90s music on the oldies station. I think the original film—and Emma before it — told a story that still feels timeless and universal. I mean, it’s really the story of a young woman at an important crossroads in her life who thinks she knows everything, finds out she doesn’t, and has to figure out who she wants to be. I think that will always resonate for a lot of people.

And obviously, we didn’t want to just replicate that in the book—we start the characters from where they were at the end of the movie; we don’t reset them to square one and ignore all that wonderful character development they went through. But we did want to convey that same feeling of a story that feels rooted in the aesthetics of the ’90s, but still has a timeless emotional core and speaks to a lot of people. So, it’s a story of these three girls facing the future—facing this moment in time where you’re figuring out who you want the adult you to be and what you want your future to look like. Which I can still relate to, because even as an actual adult, I’m still figuring that out. 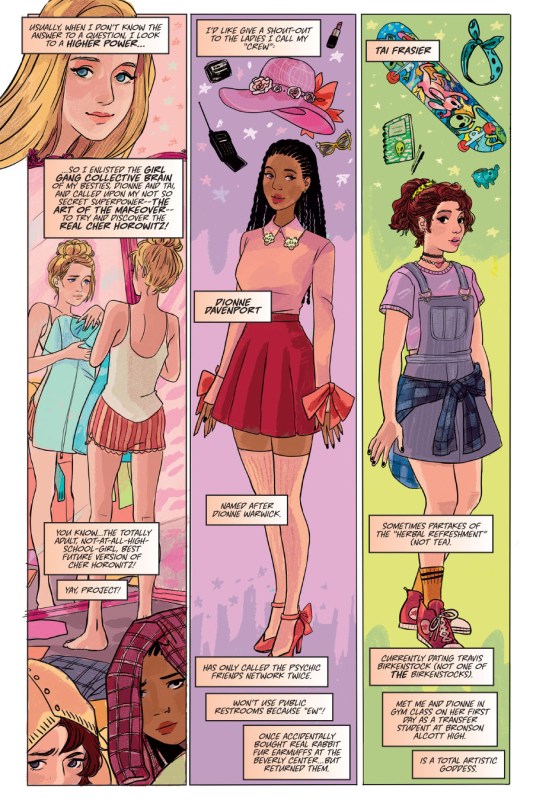 BENSON: I second what Sarah said! We worked hard to makes this new story stand on its own, but we definitely looked to the film—and to Jane Austen—as our inspiration. So long as we stayed true to Austen and Heckerling, we knew we would be all right. Sarah, I think we need bracelets that say: WWAHD.

TMS: Would you be down with writing more stories for these characters if the opportunity arose?

BENSON: I love working with Sarah and with BOOM!, so never say never.

KUHN: Oh, yes, that’s another thing we should’ve mentioned as far as what made us say yes—we were so excited to work together! We’ve been friends for a long time, but we’ve never worked together like this, so that was really cool. I think we’re open to more stories—we love these characters and it was a treat to write them. We’d just want it to be the right story and a continuation of their journeys rather than having them make the same mistakes over and over again. Although I do like the idea of senior citizen Cher still meddling in people’s lives at the retirement home.