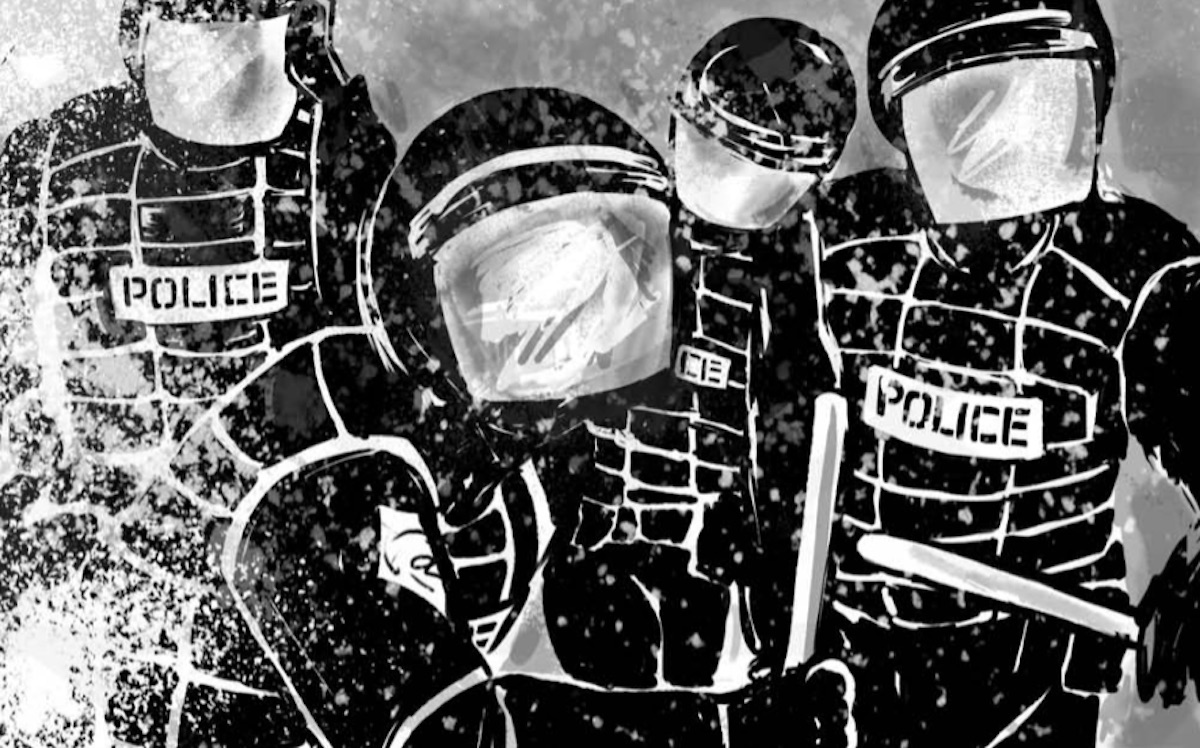 Artists against Police Brutality was published almost five years ago, but its themes remain vital and pressing—it could as easily have appeared yesterday. The project was born from the outrage that followed the murder of Eric Garner in Staten Island, and the decision not to hold the officers who killed him accountable. Rosarium publisher Bill Campbell relates that he called his fellow editors John Jennings and Jason Rodriguez with an idea: “We have to do something. Maybe an anthology. APB. We’ll call it Artists against Police Brutality!”

An APB, or all-points bulletin, is a broadcast used by American law enforcement that serves as “a notification among police agencies about a wanted person.” APBs are used all too often as a broad mandate for police harassment, persecution, and deadly violence toward Black people, with officers claiming that their target fits the description of an APB for a wanted suspect. The abbreviated title of this stunning, blistering, and devastating collection is here to remind us of this fact, as its art condemns the systemic racism and brutality with which the police operate. 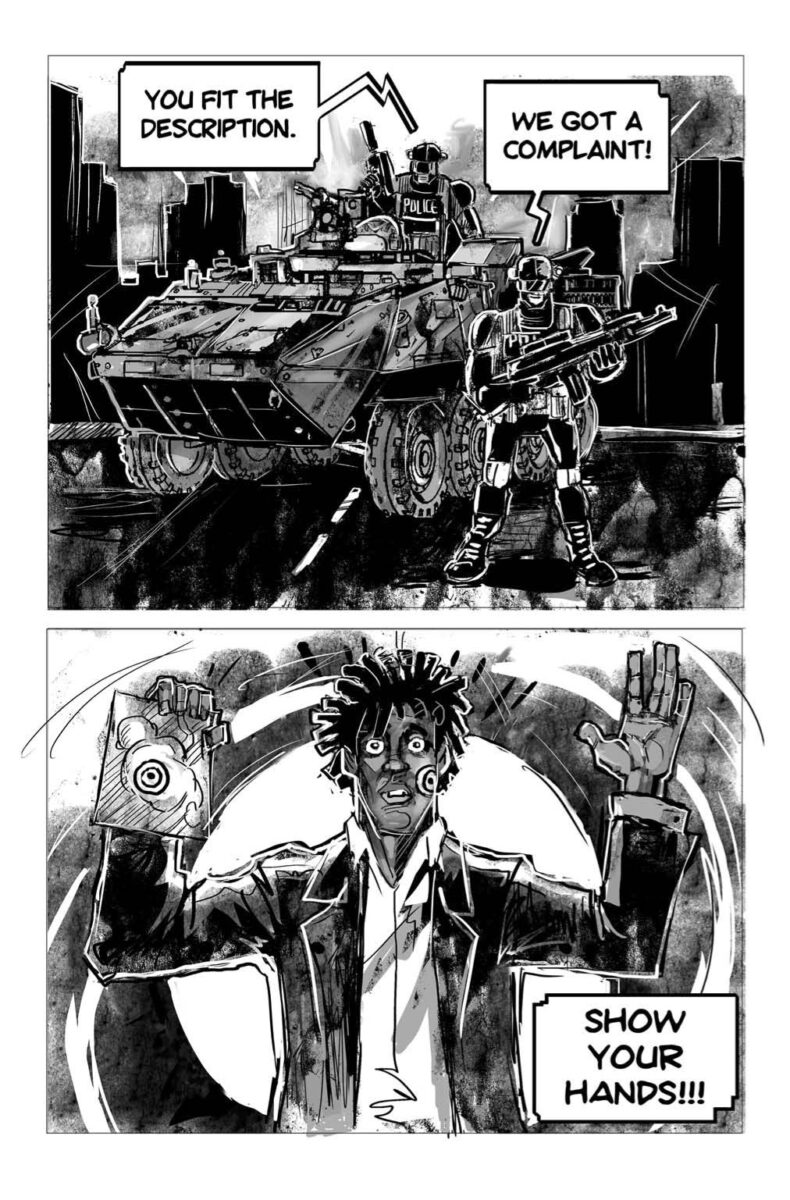 from “Profile” by Damian Duffy, Robert Love, and John Jennings

Campbell writes of the anthology, “It was the hardest, most heartbreaking, enraging project I’ve ever worked on. But it came together in less than a year, joining together the voices of over 60 authors, artists, and academics to cry out for justice. Almost five years later, the anger is still there, and, unfortunately, APB has not lost its relevance.” 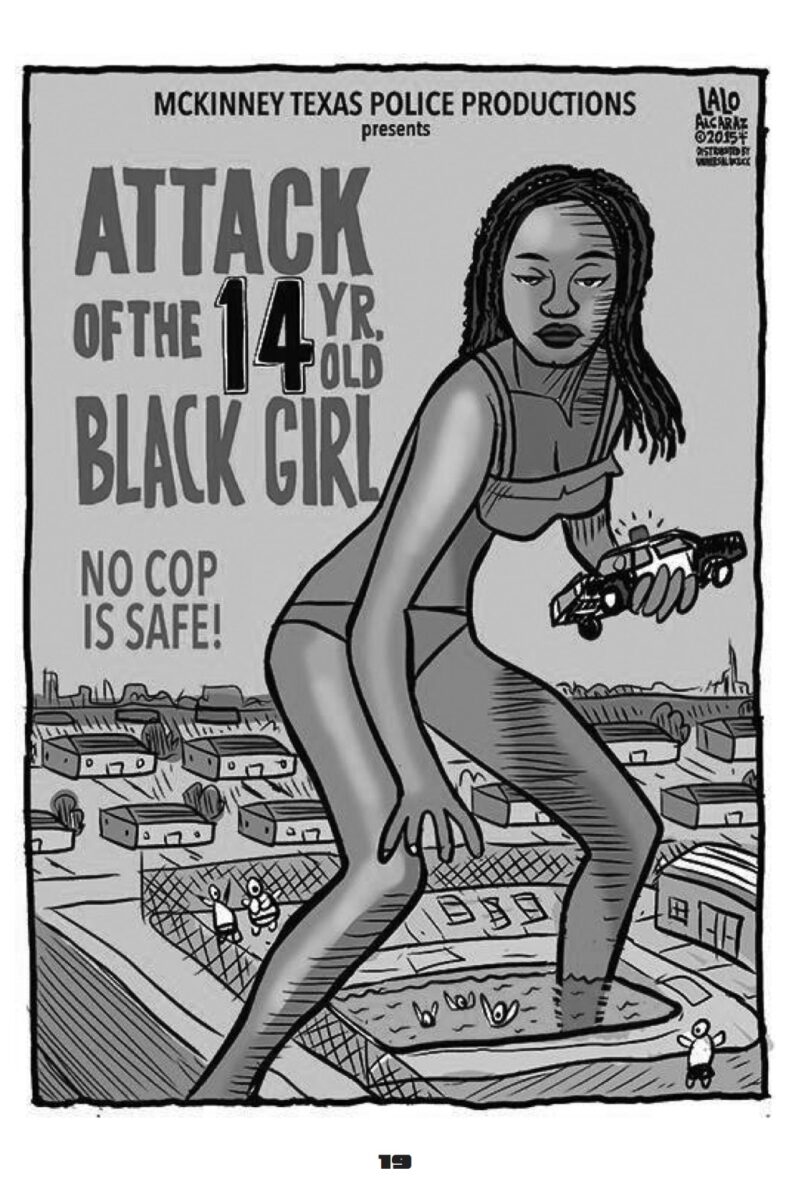 “Attack of the 14 Yr. Old Black Girl” by Lalo Alcaraz

Campbell gave us permission to feature a few of these hugely important pieces here, and I wish I could make this volume required reading. Artists against Police Brutality should be on every bookshelf and in every school and library in America and worldwide.

You can get your own copy, and several additional copies for your friends and family, directly from Rosarium Publishing here. It’s available as both a paperback and in ebook format. All proceeds go to the Innocence Project, a nonprofit legal organization that works to exonerate those who were wrongly convicted. 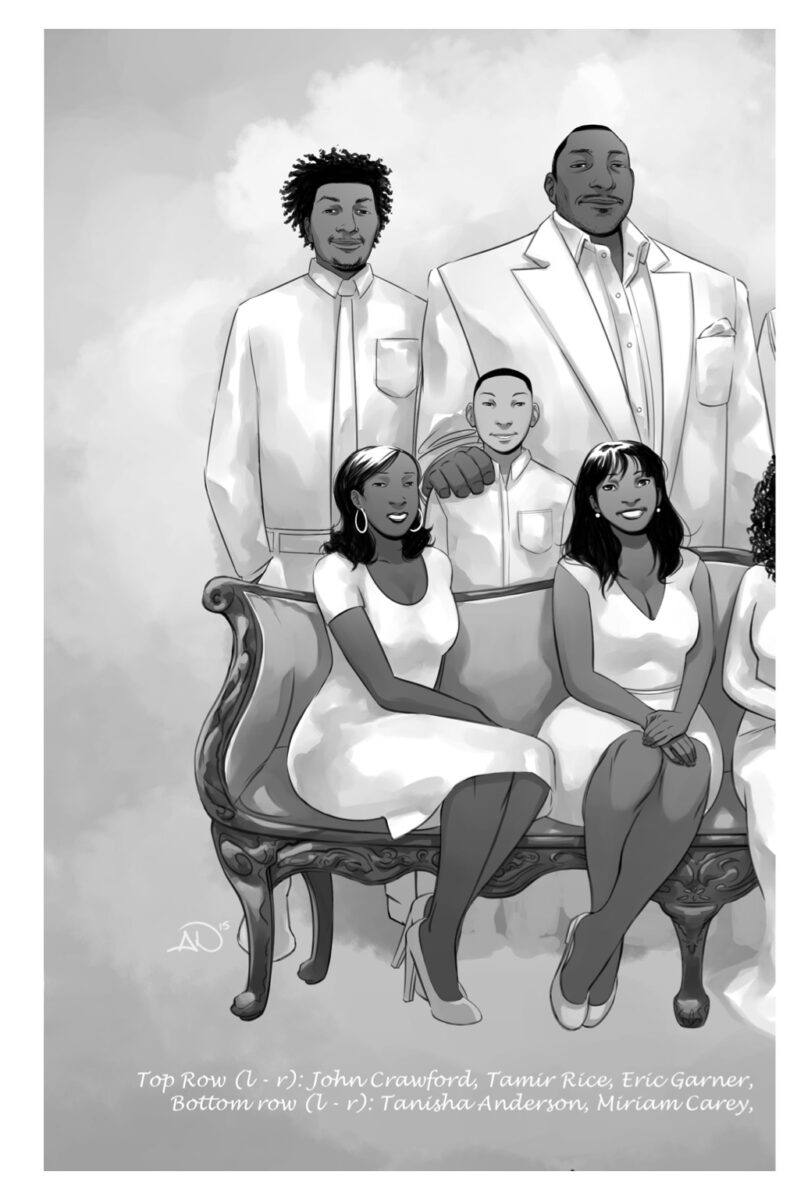 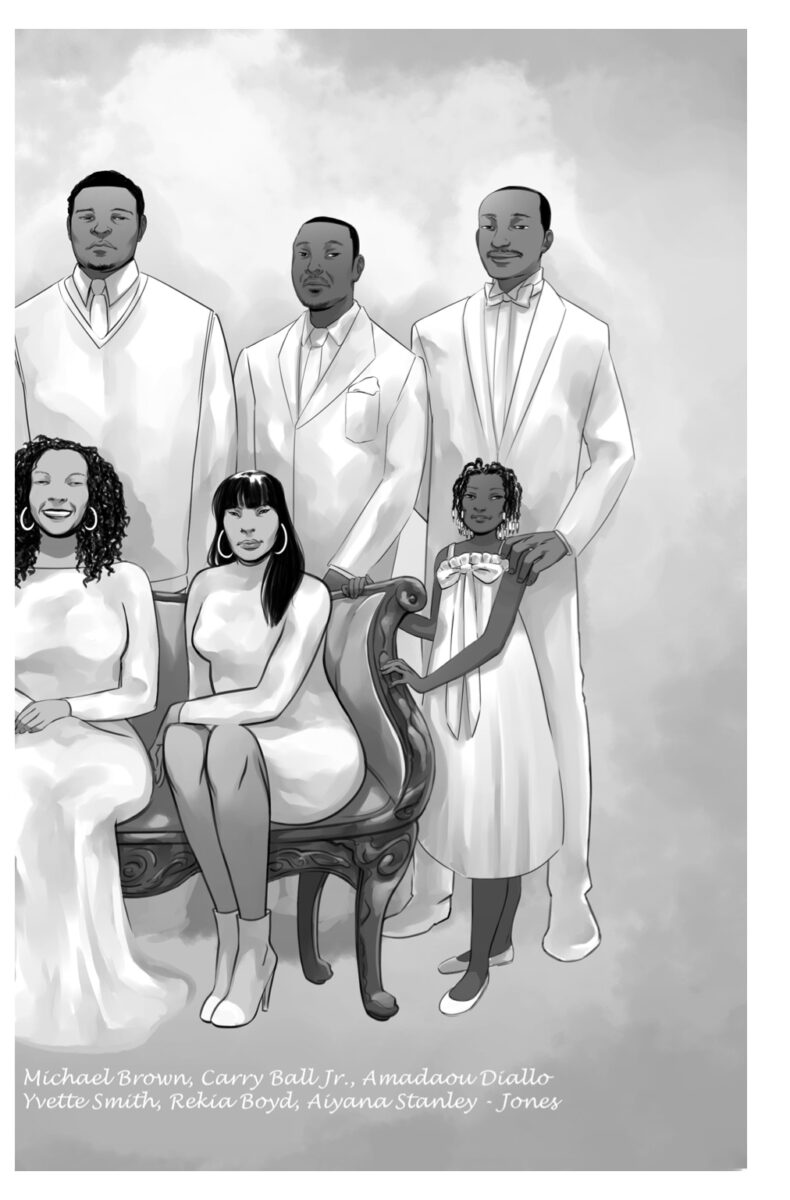 In his introduction to APB, Bill Campbell writes:

I have likened police interactions with communities of color to war. Well, much like Vietnam, this is a war that is being brought into your living room every day—and on your computer, your tablet, and your phone. If there were a memorial wall constructed in the nation’s Mall here in DC to this war, it would be an ongoing project that would in a very short time become a life-sized maze encompassing the entire city.

Like the Vietnam protestors back in the day, nobody involved in this project thinks that when APB is released, the justice machine will suddenly see the error of its ways, things will be reformed, and we will all live happily ever after. This ain’t no Tom Cruise movie. However, what we desire is to simply further the dialogue, make some people see this debate in a different light, perhaps change a mind or two, and, most importantly, exercise our freedom of speech in honor of all those who have had their voices silenced. 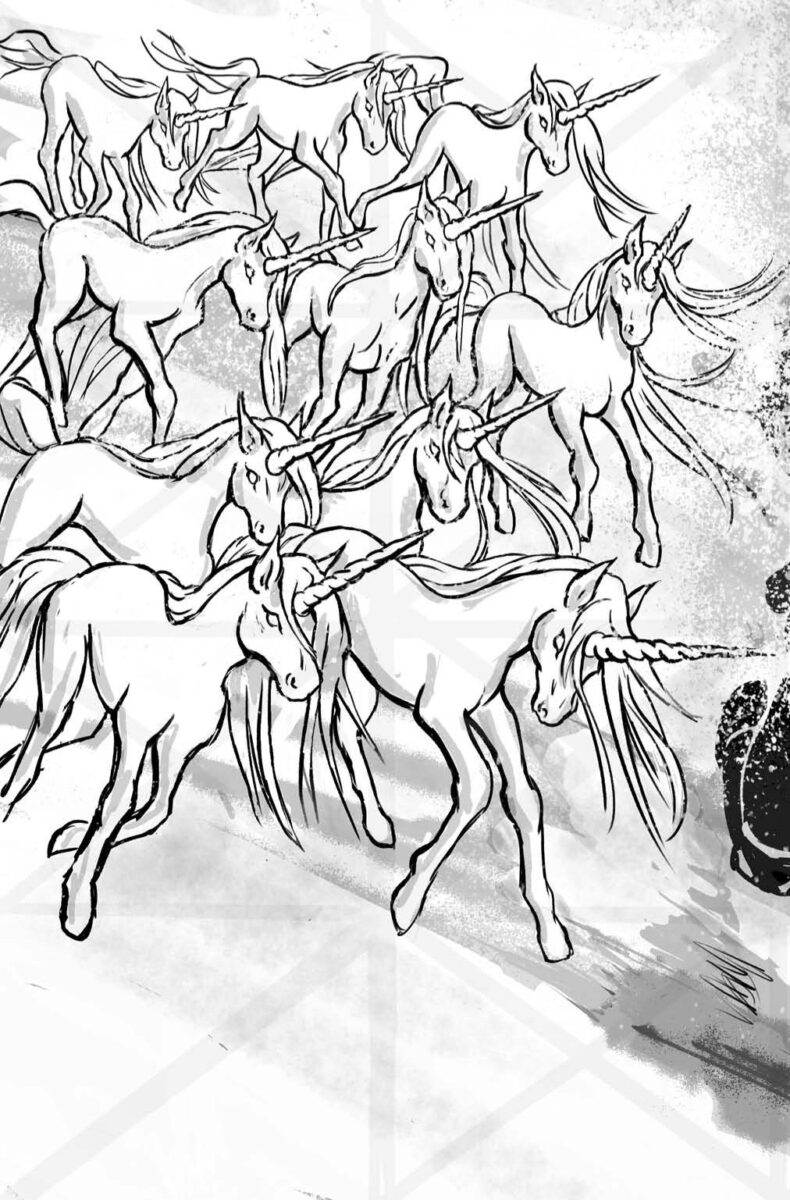 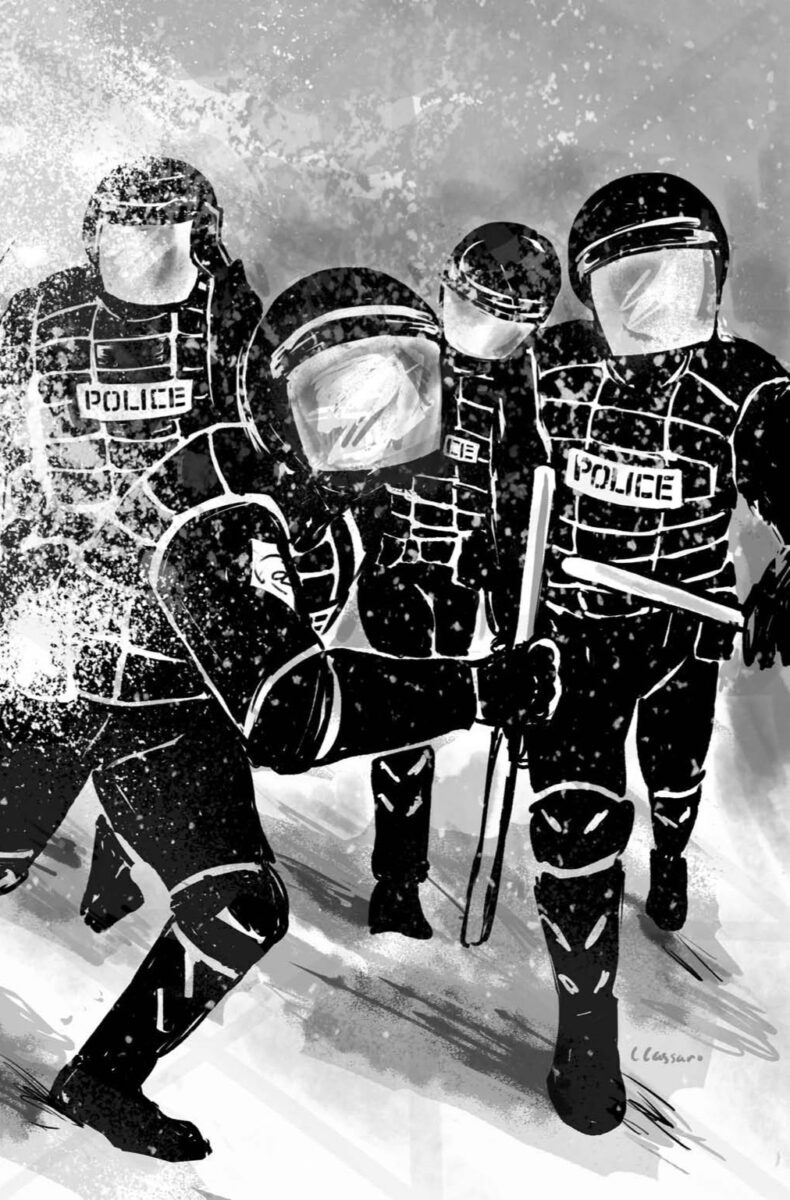