Artie's mom is a what now? 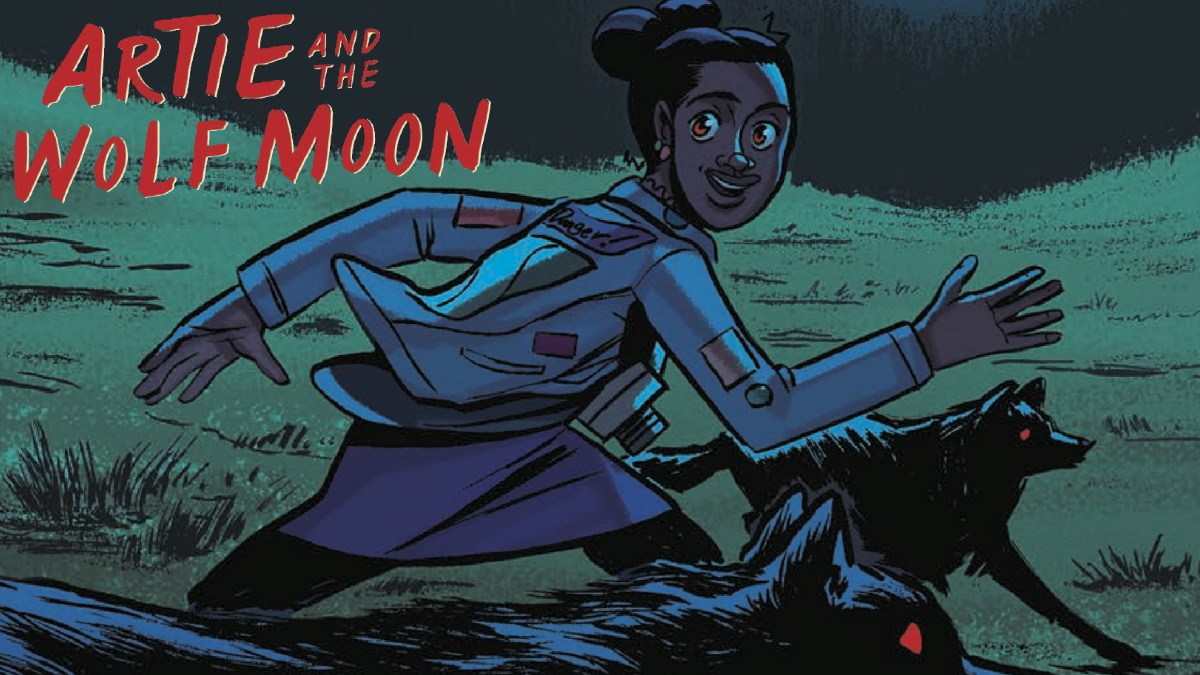 I remember, a couple of months ago, there was a discussion online about wanting more fun, Black, supernatural stories. I shared the same sentiment as someone who would, most definitely, devour a story that had, oh I dunno, a family of Black werewolves, one of which is a girl who crushes on another girl.

Oh, and did I mention vampires?

Yeah, there are vampires, too.

After sneaking out against her mother’s wishes, Artie Irvin spots a massive wolf―then watches it don a bathrobe and transform into her mom. Thrilled to discover she comes from a line of werewolves, Artie asks her mom to share everything―including the story of Artie‘s late father. Her mom reluctantly agrees. And to help Artie figure out her own wolflike abilities, her mom recruits some old family friends.

Artie thrives in her new community and even develops a crush on her new friend Maya. But as she learns the history of werewolves and her own parents’ past, she’ll find that wolves aren’t the scariest thing in the woods―vampires are.

“Artie and the Wolf Moon is my love letter to several things that are close to my heart, including the beauty of nature and the exciting mystery of supernatural beings,” Stephens said when talking about her work. “But most importantly, I made this graphic novel as a testament to the power and joy that can be found in one’s community. No one gets through life alone, and the loving relationships we forge with others along the way can help us overcome our greatest obstacles. This is the lesson that Artie learns over the course of her story, and one that I hope all of us can remember in dark times. ”

We got a first look at a couple of pages from the graphic novel. In it, we see that Artie’s in a bit of a jam and forced to hide from a wandering wolf, only to discover that the wolf is her own mother! 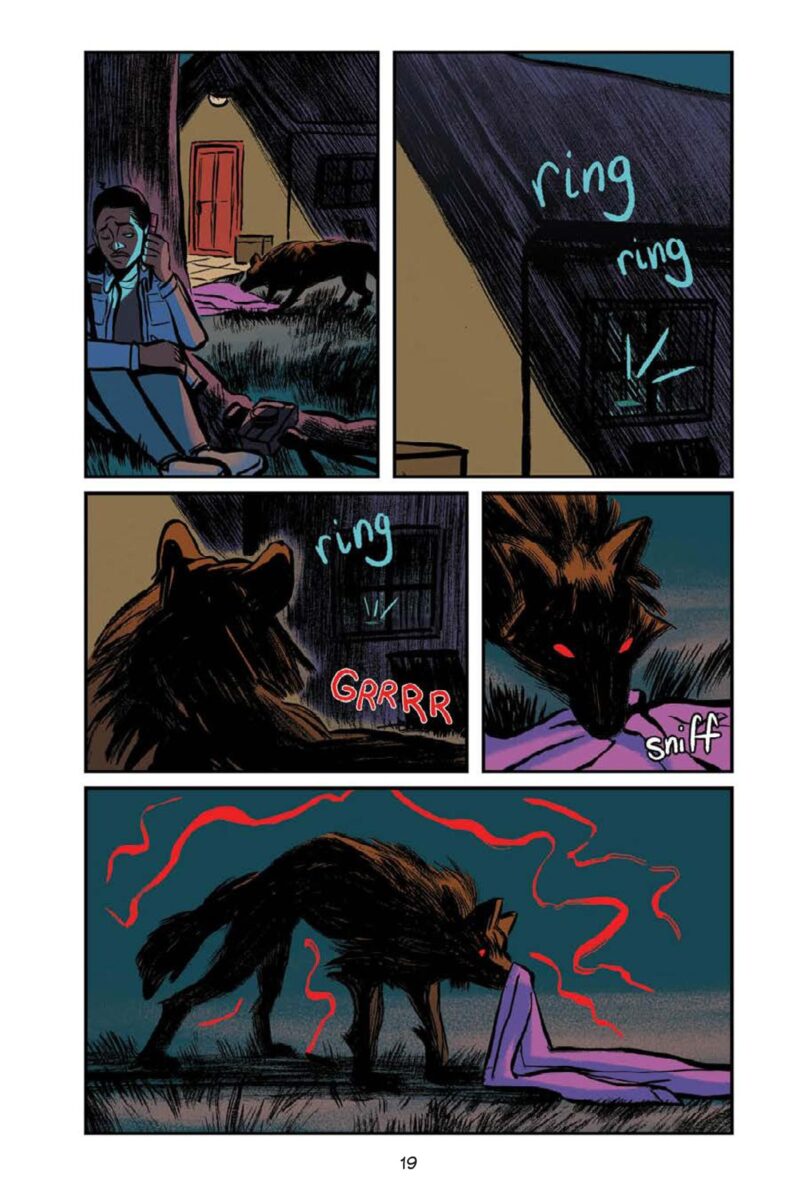 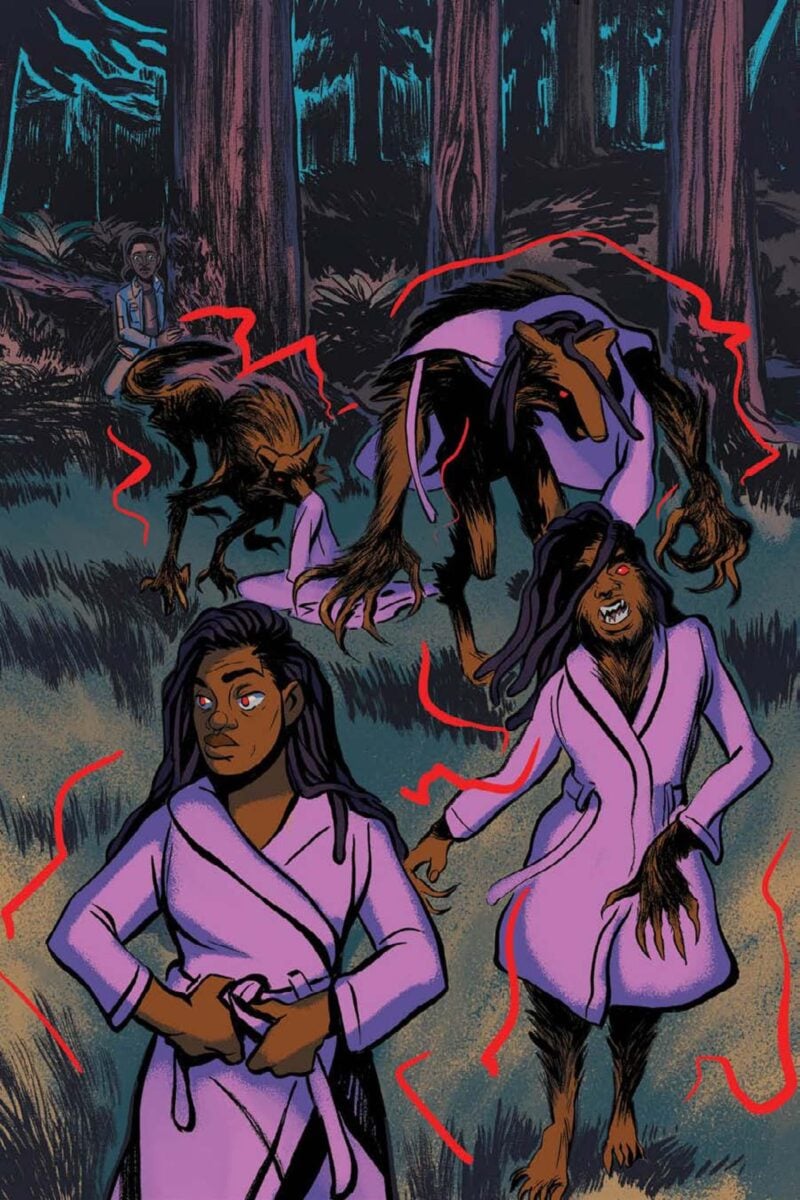 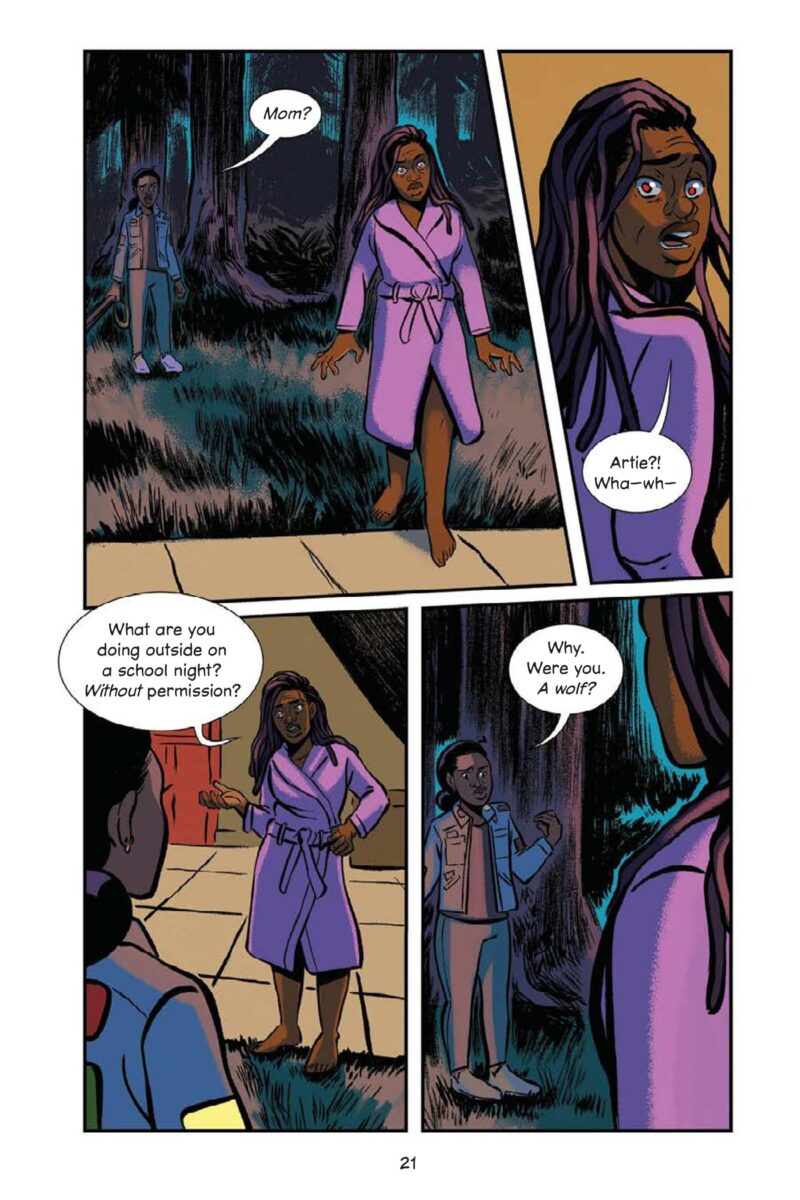 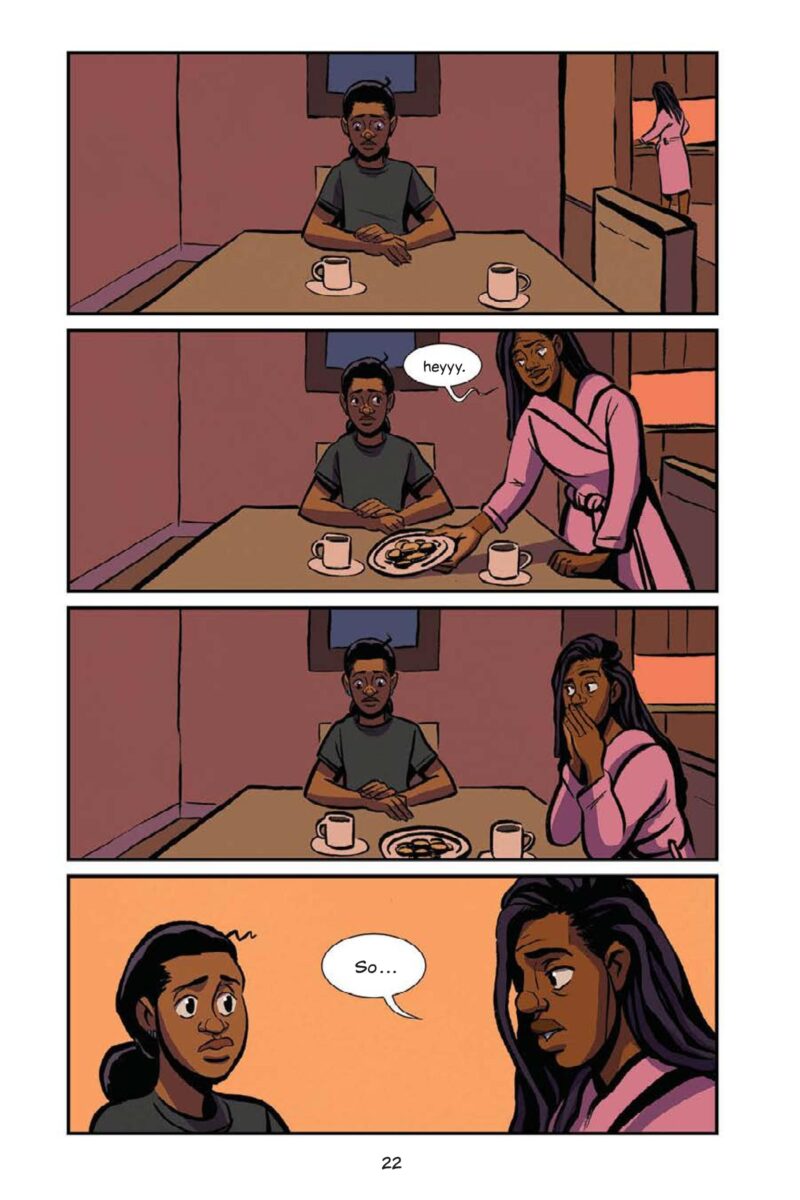 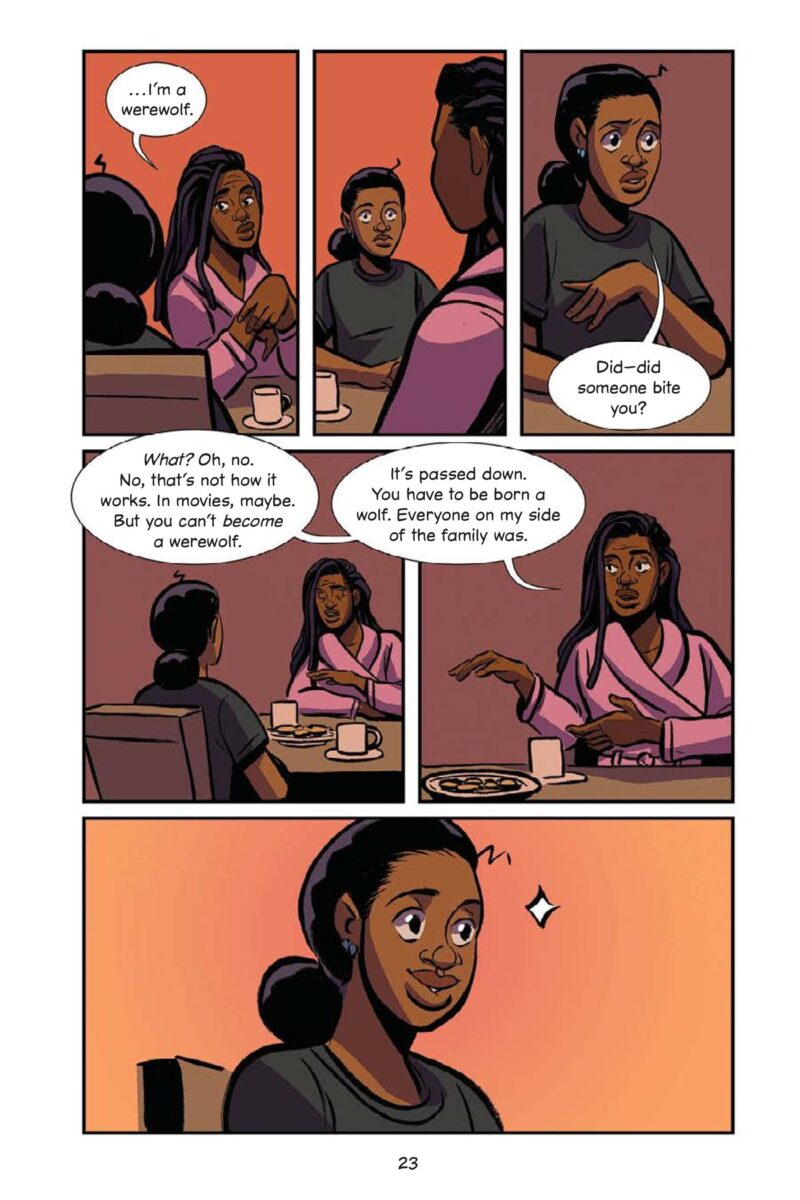 There is a lot that I love about this. The art style reminds me of spending hours in the library, reading horror books aimed at younger audiences, the kind where someone finds out that, well, their mom is a werewolf. I love that Artie is excited about her werewolf heritage because if I were her age I’d think that being a werewolf was pretty cool. I love that there’s no sense of shame for being a werewolf, especially since there’s an entire community to learn from.

Speaking of which, I love the idea of Artie learning from a Black werewolf community and not just her mother. That makes a lot of sense to me, especially since Artie’s mother tells her that you don’t become a werewolf, it’s passed down through your family. This gives Artie a lot of people to learn from, which will give her a variety of perspectives when it comes to her newfound abilities. While the synopsis does say that Artie’s mom is hesitant (and it’s clear from the pages that she was keeping it from Artie), I get the feeling it’s because she doesn’t want Artie to get hurt by the scariest thing in the woods.

I’m really excited to learn more about that aspect of the story. Who are these vampires, why are they at odds with the werewolves, and how will Artie fare with this crush she has on her new friend, Maya?

You can pre-order Artie and the Wolf Moon over at Amazon or directly from the publisher, Lerner Books. The book will be released on September 7th. 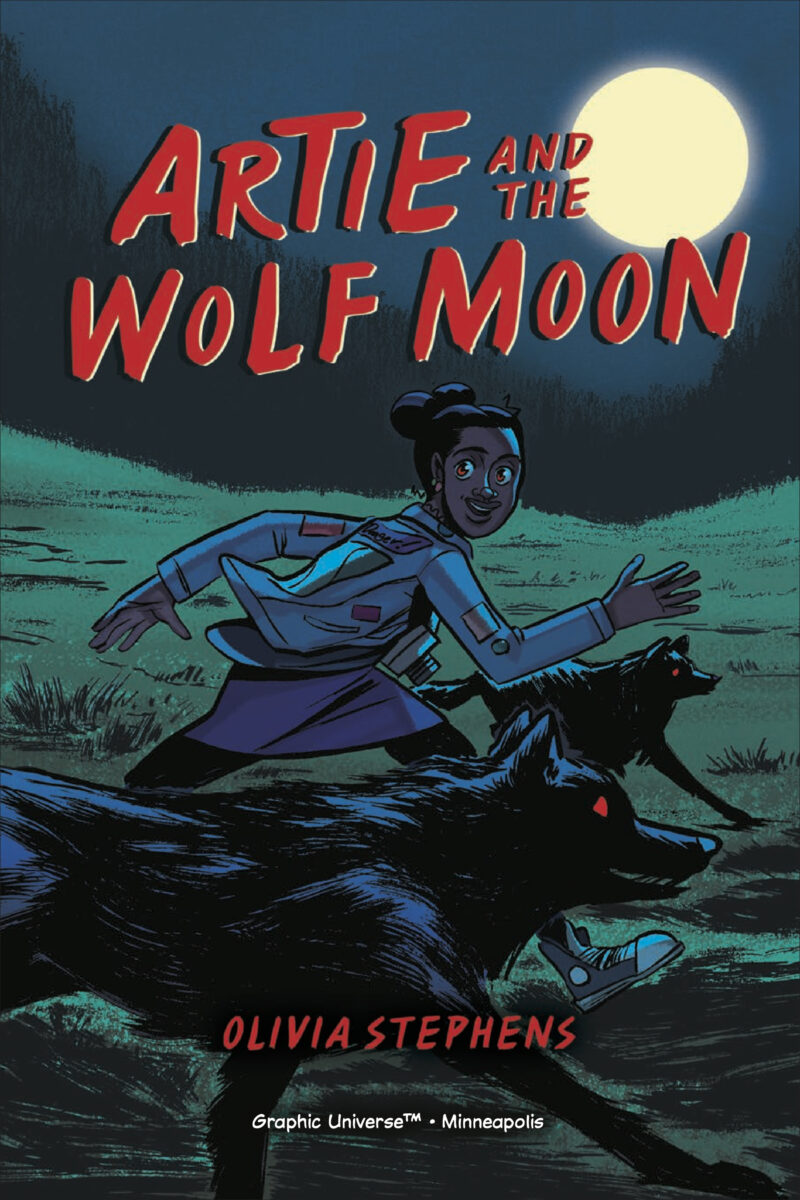