Thanks to Disney, Artemis Fowl Movie Now a Thing That is Happening

“I can't imagine what they're planning. But I can tell you two things. We won't like it, and it won't be legal.” 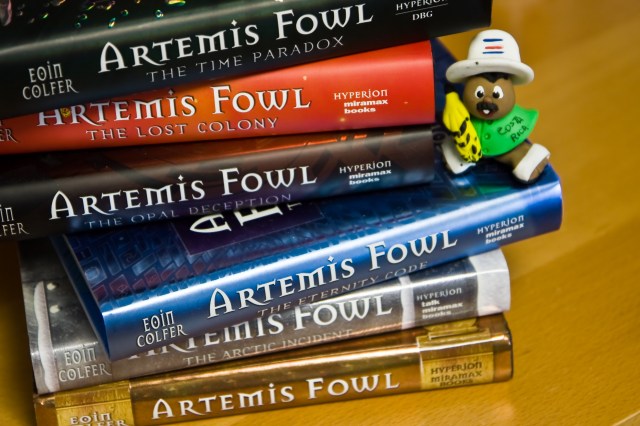 Eoin Colfer’s tale of the genius, criminal mastermind, millionaire twelve-year-old is coming to the big screen. If you haven’t read the Artemis Fowl  books, well, Colfer called it “Die Hard… with fairies.”

Not-yet-a-teenager Artemis comes from a family of extremely lucrative criminals. And naturally he thinks he ought to kidnap a fairy — specifically the first female officer of the Lower Elements Police. As is so often true in fiction, forceful drugging-and-kidnapping paves the way for deep and lasting friendship, as well as an interesting take on the confluence of technology and magic.

I’m hoping Asa Butterfield continues with his strangely bright-eyed and precocious characters and takes the helm as Artemis, but casting has not yet started. Harvey Weinstein signed on to produce, and Michael Goldenberg — who wrote the film adaptation of Harry Potter and the Order of the Phoenix — will pen the screenplay. According to ComingSoon, Weinstein explained that Robert de Niro and Jane Rosenthal (who will be executive producers of the film) brought him the book when he still worked at Miramax. Weinstein’s immediate reaction was to buy the rights, and apparently his children love the series.

The first in the eight-book series was published twelve years ago, and the novels have sold over 21 million copies in dozens of languages. A screenplay was first completed a decade ago, but stuck in development hell until recently. With the ever-growing popularity of science fiction and somewhat-villainous protagonists, it makes perfect sense that Disney has finally decided to adapt the first two works.