Behind the Panel: The Art Process Behind Tyson Hesse’s Diesel 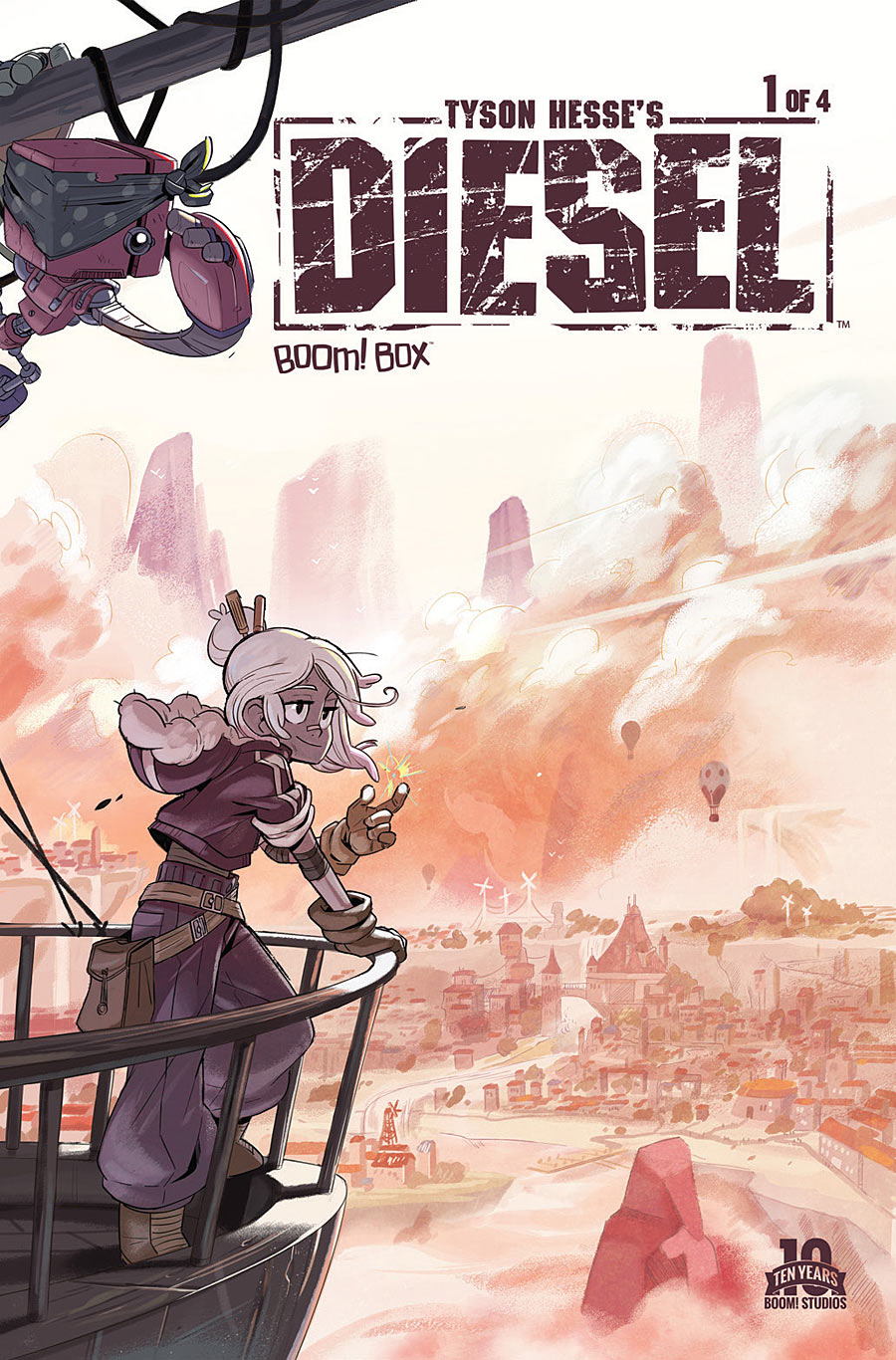 We’ve got a super special treat for y’all today. BOOM! was kind enough to share some process photos with us, peeling back the panel to show us the work that goes into making the beautiful, breathtaking art of Tyson Hesse’s Diesel.

A quick primer: Diesel is a four issue miniseries with a real steampunk edge to it. It’s a coming-of-age story set in the clouds about a girl who loves to fly but finds herself unable to when her father’s zeppelin is stolen by a rival pilot. But a new airship comes around, abounding with mystery, and the story really takes off from there.

There’s a real beauty to this art, and I, for one, am incredibly glad to take a peek behind the scenes here. Check it all out below, including artist commentary.

Being the writer and artist on a project opens up a lot of doors, creatively. Most importantly for me it leaves the door open right until the finish line, and I’ll try to explain why that’s so important to me.

A writer will usually have a picture of what they’re writing in their head. Sometimes it will be clear, sometimes it will be vague. As you write an exciting scene you might not be thinking of every little detail, such as a scene’s lighting or every environmental detail surrounding your characters. Are there any tables nearby? If there’s not a purposeful interaction with a table the writer may leave that out as they’re details that may not matter to the backbone of the scene. But just like a movie, when you put the actor in that room maybe they lean on a table or pick up a book and unconsciously flip through it as they deliver their line.   These are all improvisations that make a character more human. Being the writer and the artist lets me improvise in ways like this. 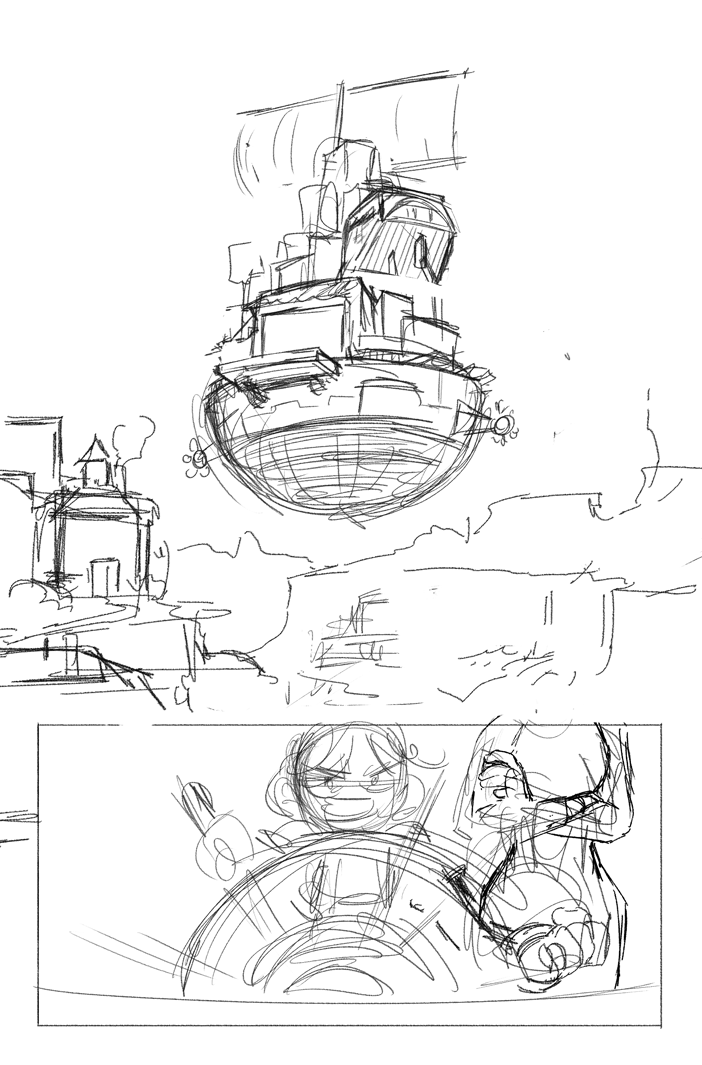 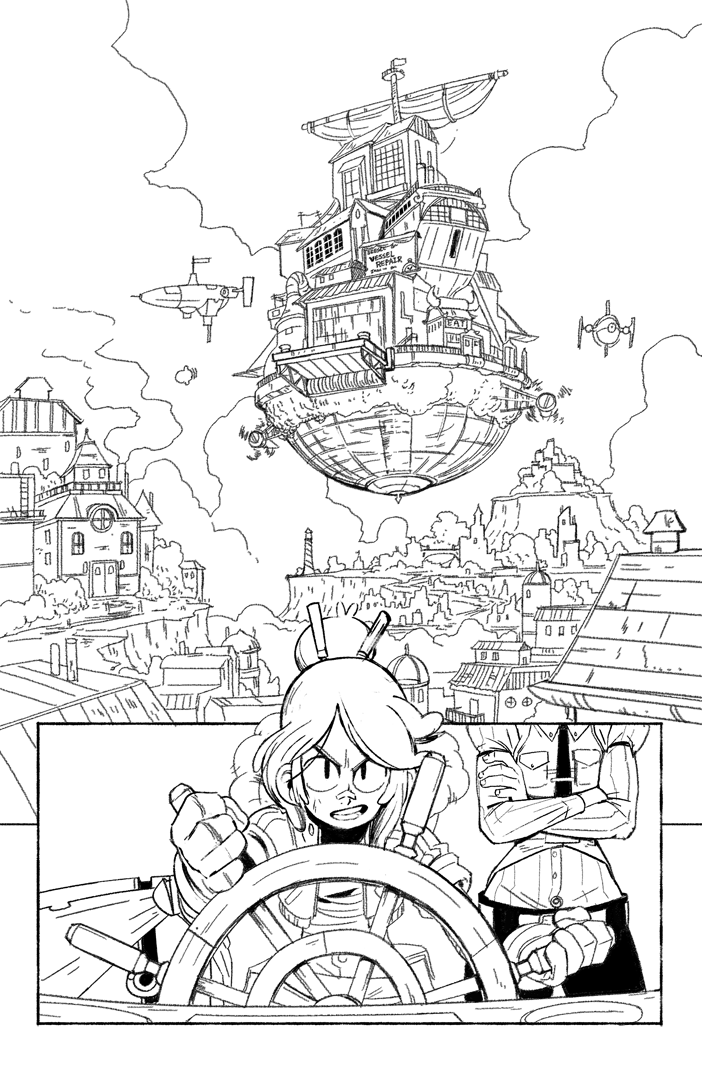 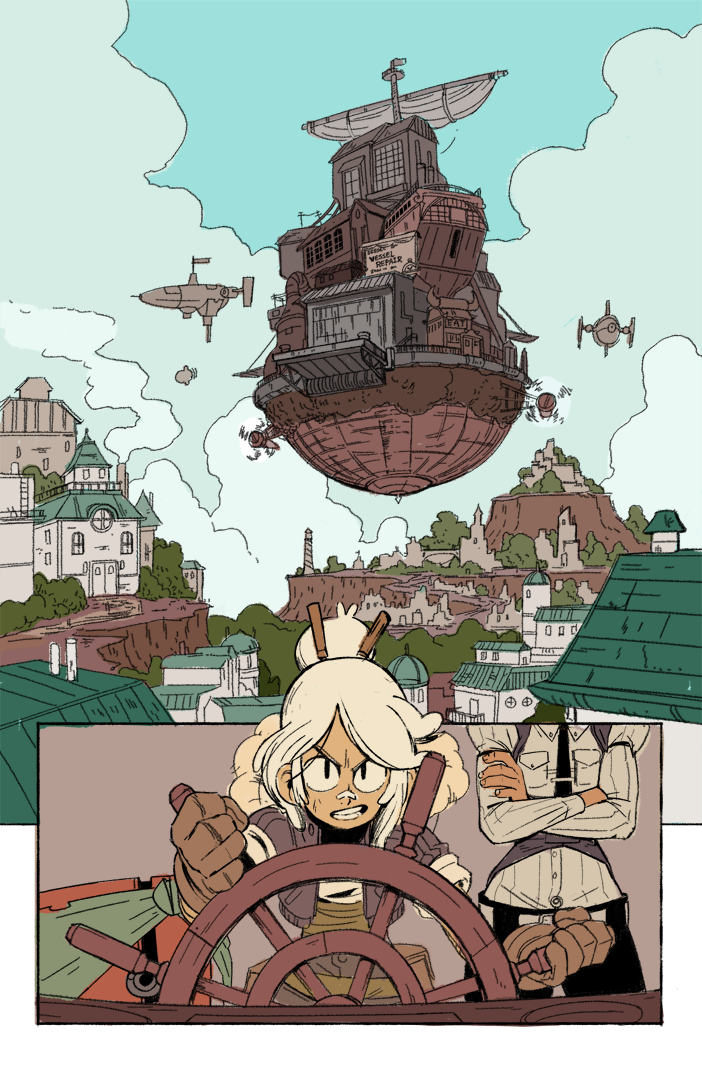 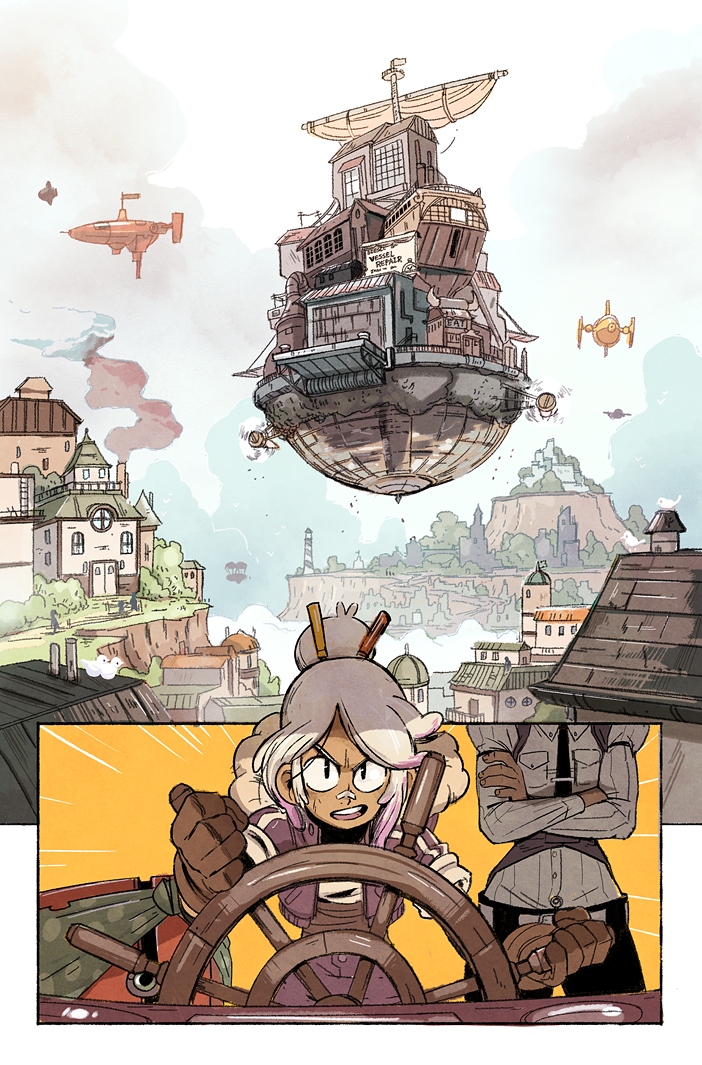 For example, in this first opening scene I didn’t write that Diesel would flip through some books on the nearby shelves. As I posed her out though, the acting made sense. This allowed me to have some fun with what kind of books that the captain might line her shelves with. It’s a small thing but it deepens your understanding of the characters and it wouldn’t have existed if I had just written a script and handed it off to an artist. I wouldn’t have thought of that scene playing out that way until I saw the characters there in that set. Being able to improvise acting all the way through to the end helps make my end result much stronger. 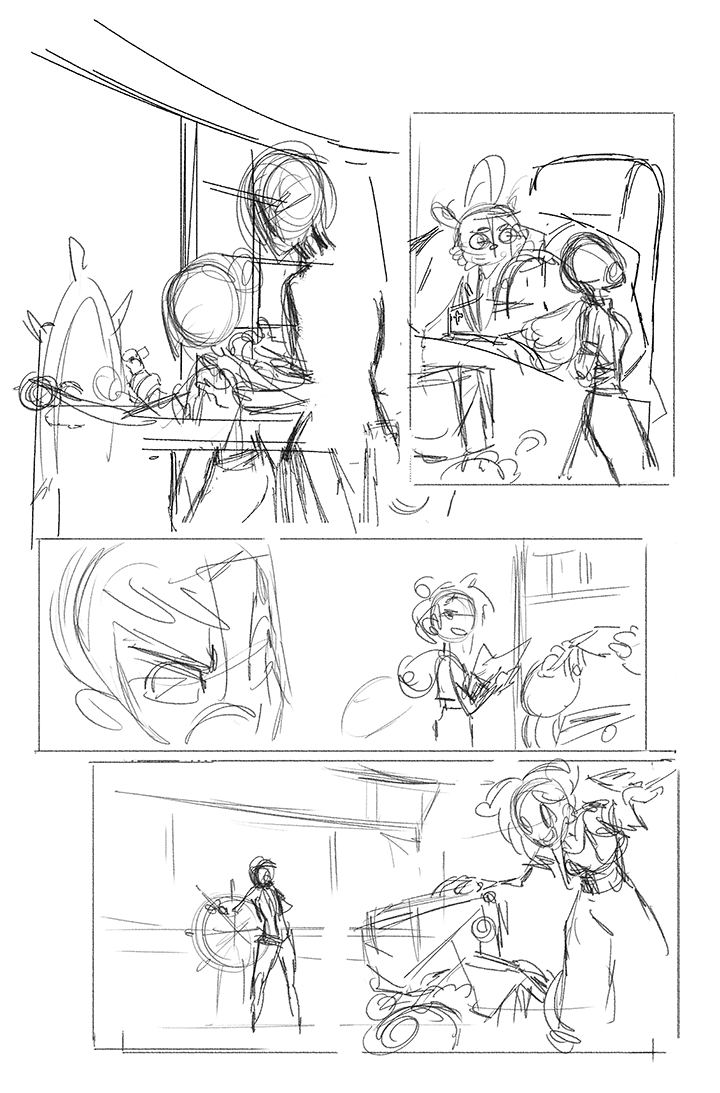 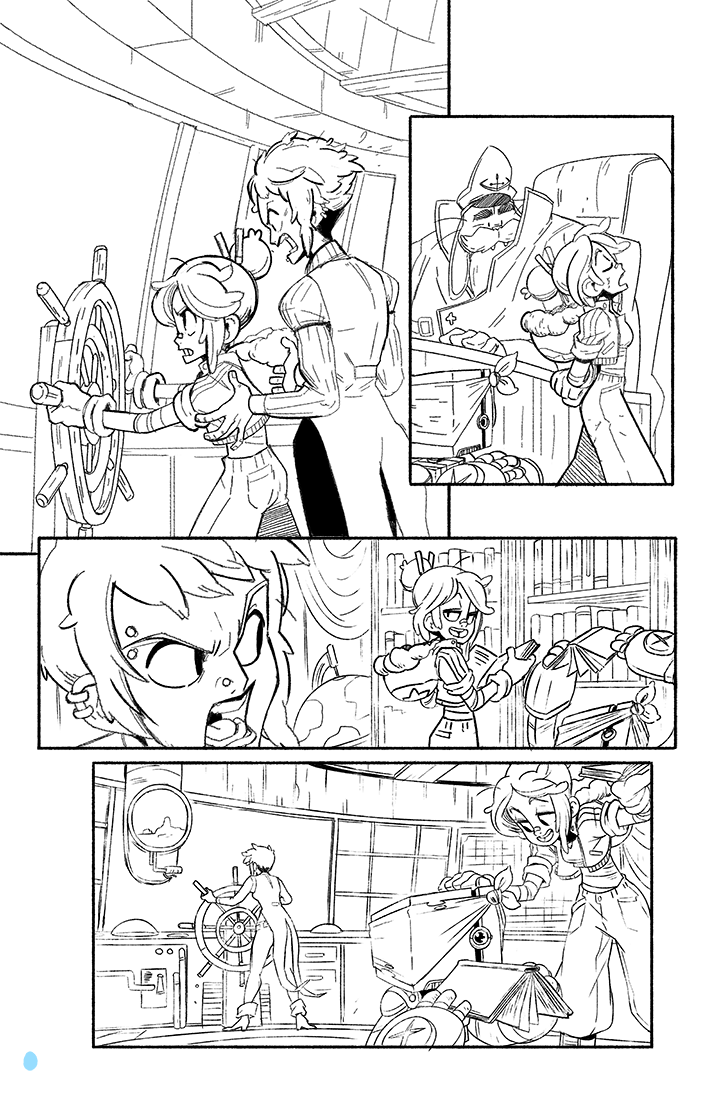 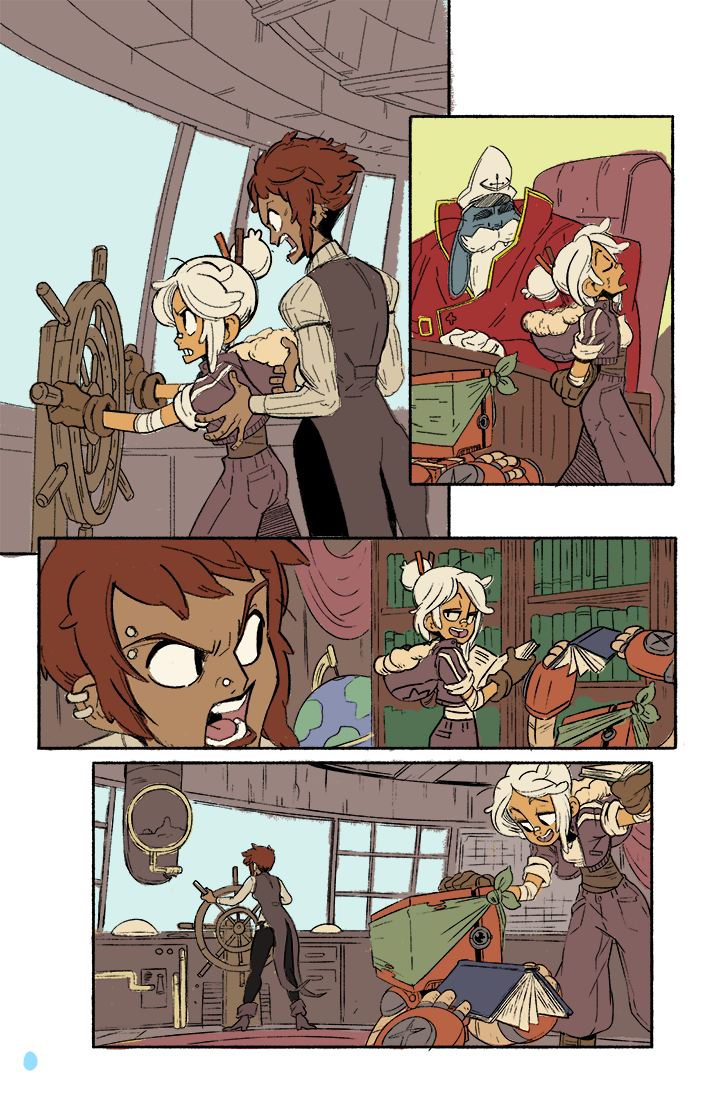 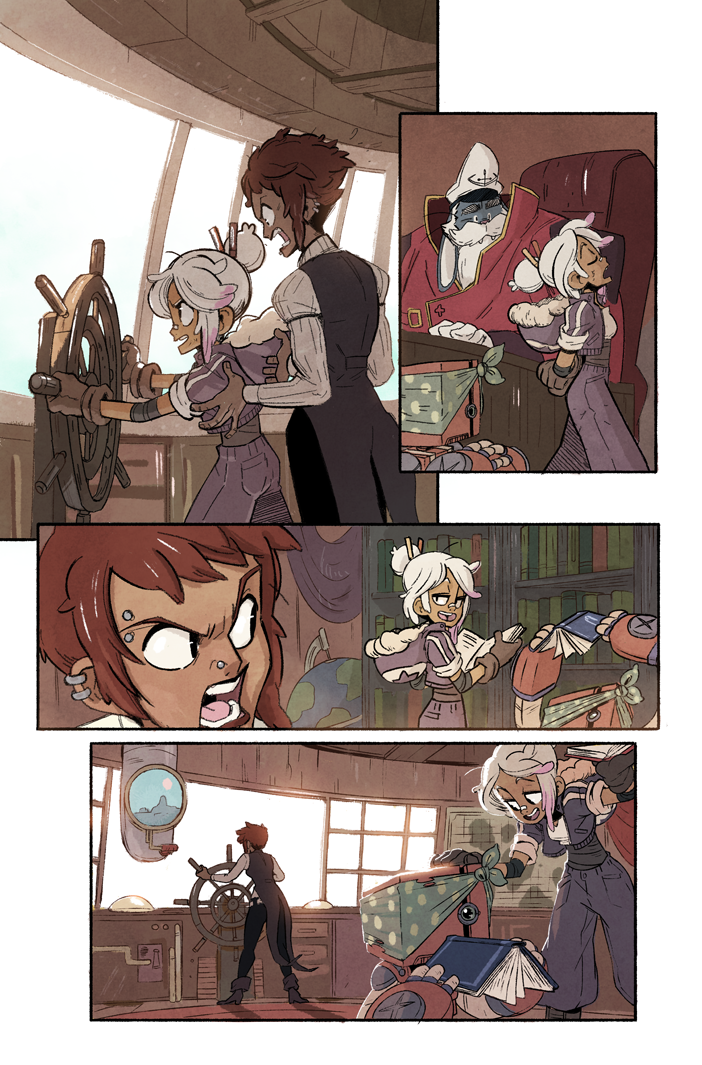 This is also why I work very loose in the sketch phase of my pages. My sketches are what normally a comic penciller would use for thumbnails. But being the penciller and the inker lets me go right to the finished lines without tying everything down too much. You can lose a lot of energy by overworking a drawing in the pencil phase, so I will usually ink right off my gestures. This is also something I do to save time. Doing (almost) everything on a book every month doesn’t afford me a lot of time for clean lines and colors so the look I developed for Diesel all feeds into that. The lines are sketchy because I’m laying down final lines on many things that haven’t been sketched out yet. The colors bleed a little bit to match the sketchy lines. Everything is very loose and expressive because it’s really the only way the book could get done every month, but it also matches the gritty feel of the world and story. Everything about the book is supposed to feel just a little dirty and messy. 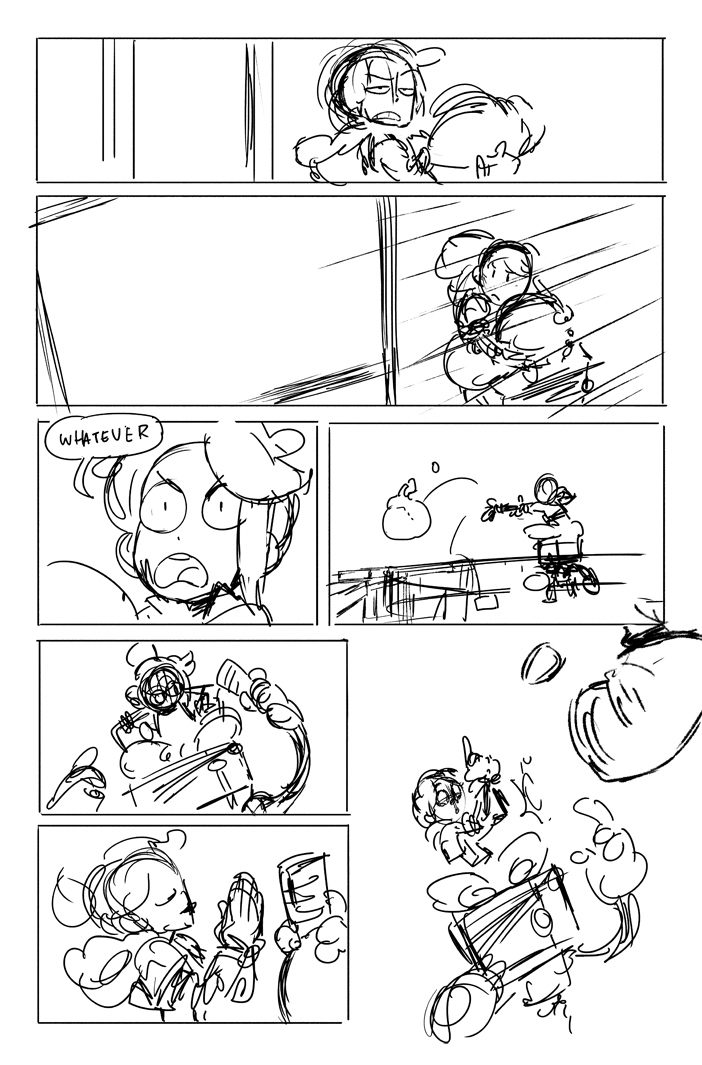 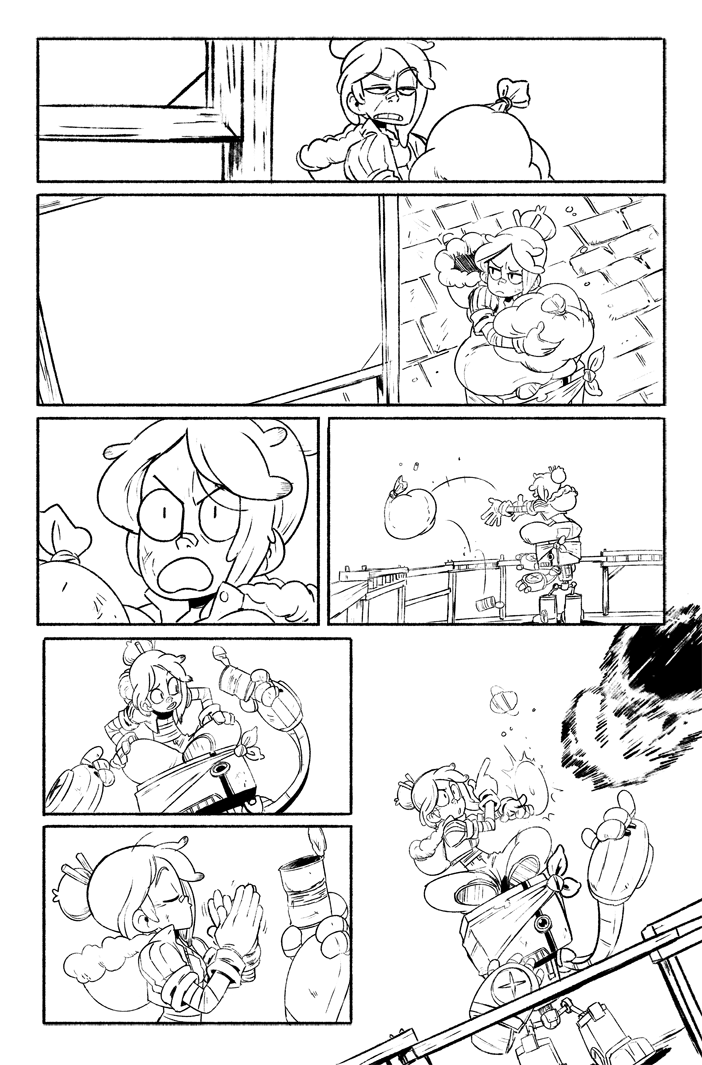 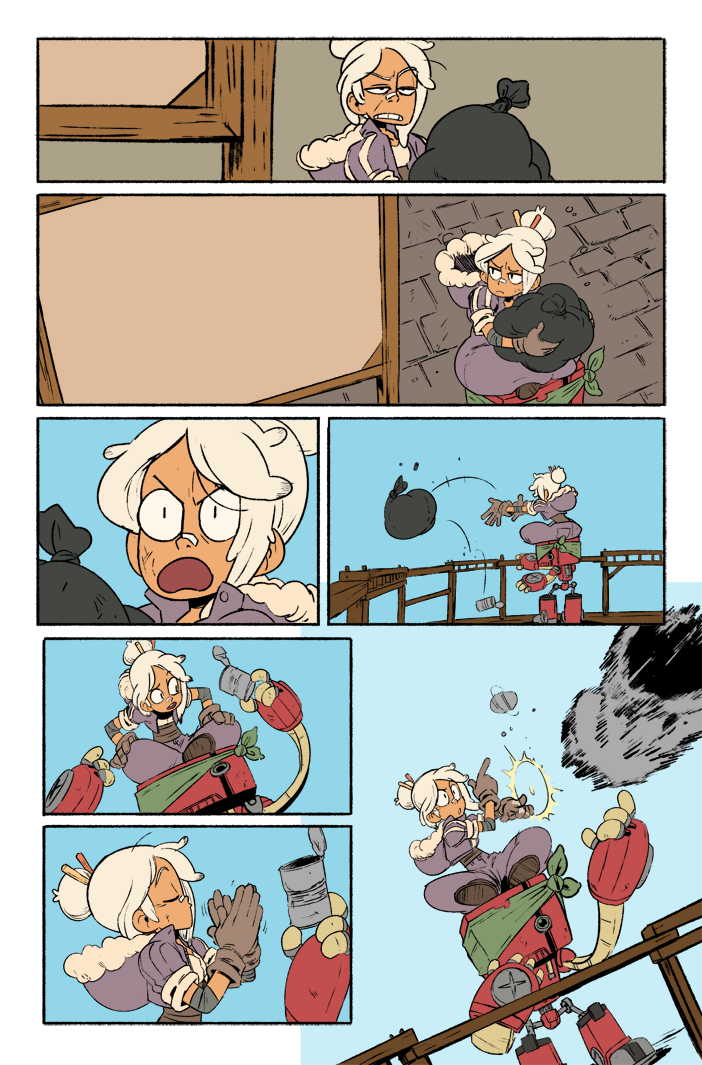 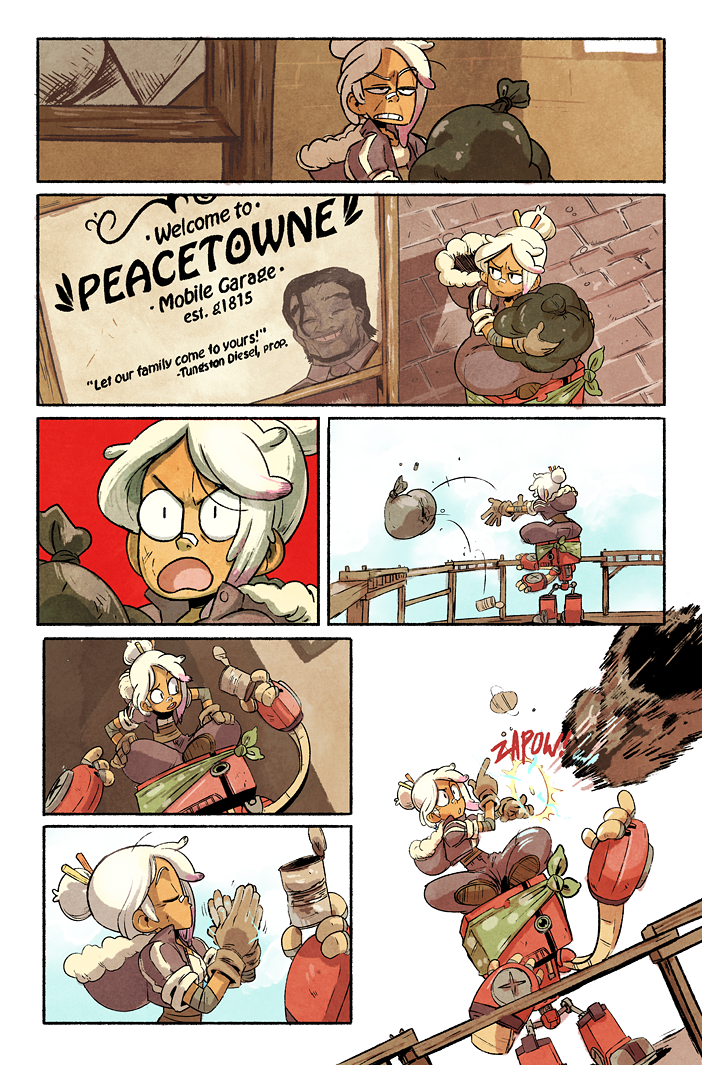 Working as the colorist also let’s me change details up until the 11th hour. You’ll see in a few of these pages where a character’s expression or pose will change even after the coloring process is started. Many times I will completely finish a page, and come up with a better line of dialogue that would necessitate a slightly different pose or expression. This is the kind of thing that would drive a normal team batty with fixes and edits, but for me it’s a relief that I have the option. Being the colorist also saves me some time during the line-art phase because I know if a background is going to be out of focus I can gesture it in with color blocking instead of having to draw the whole panel out. 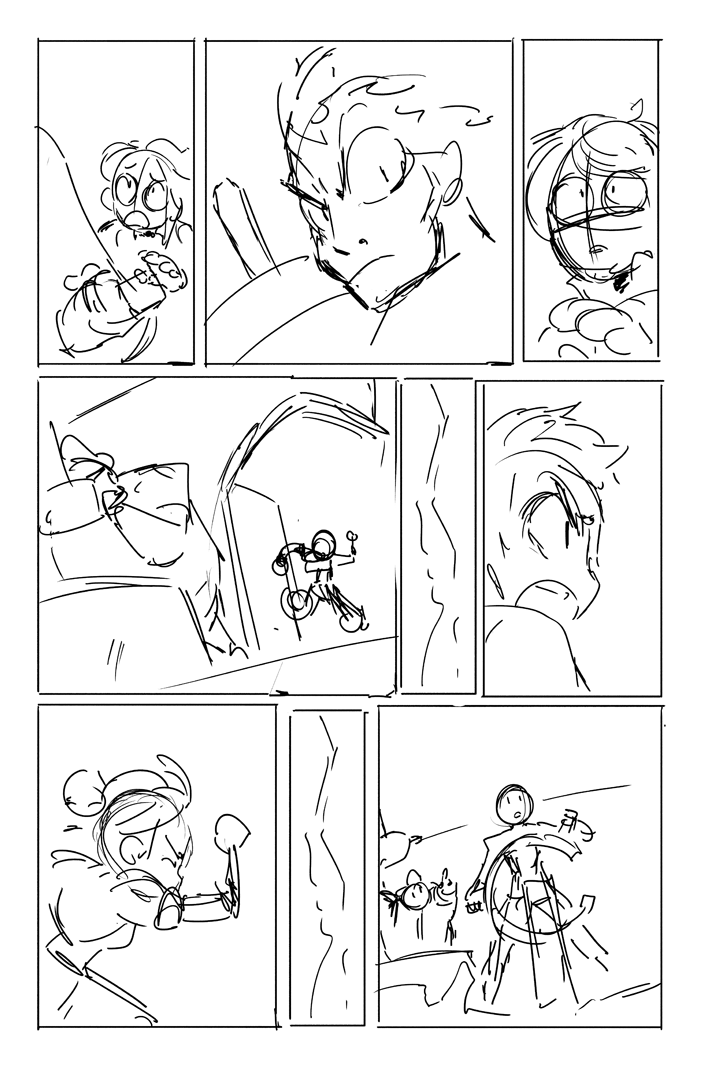 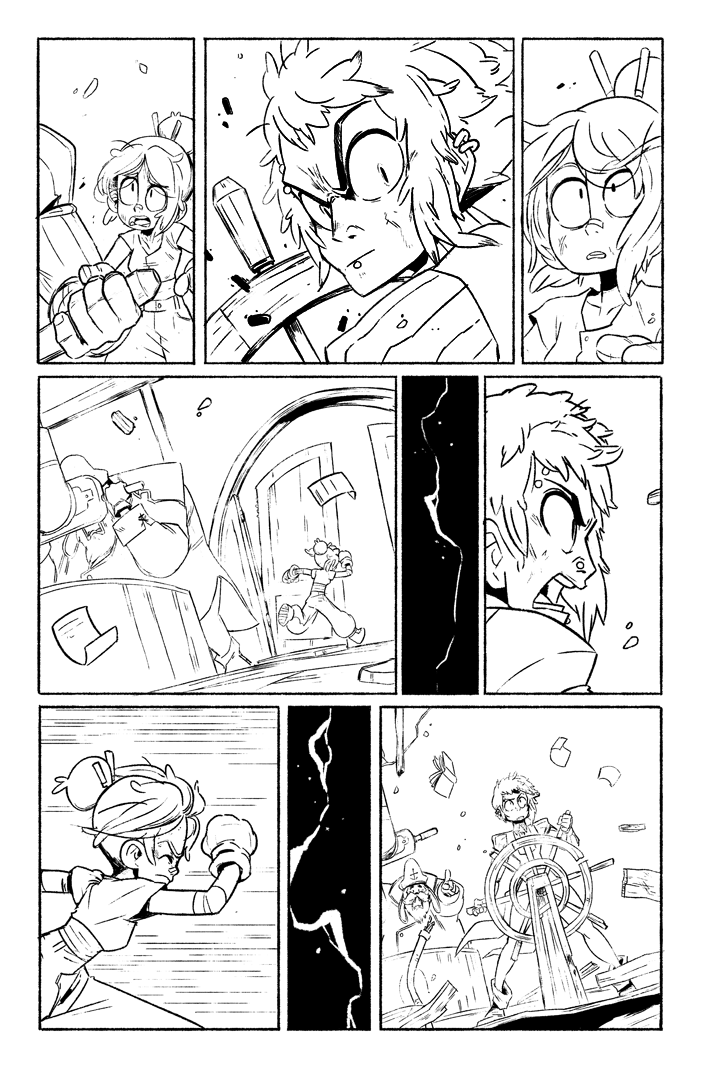 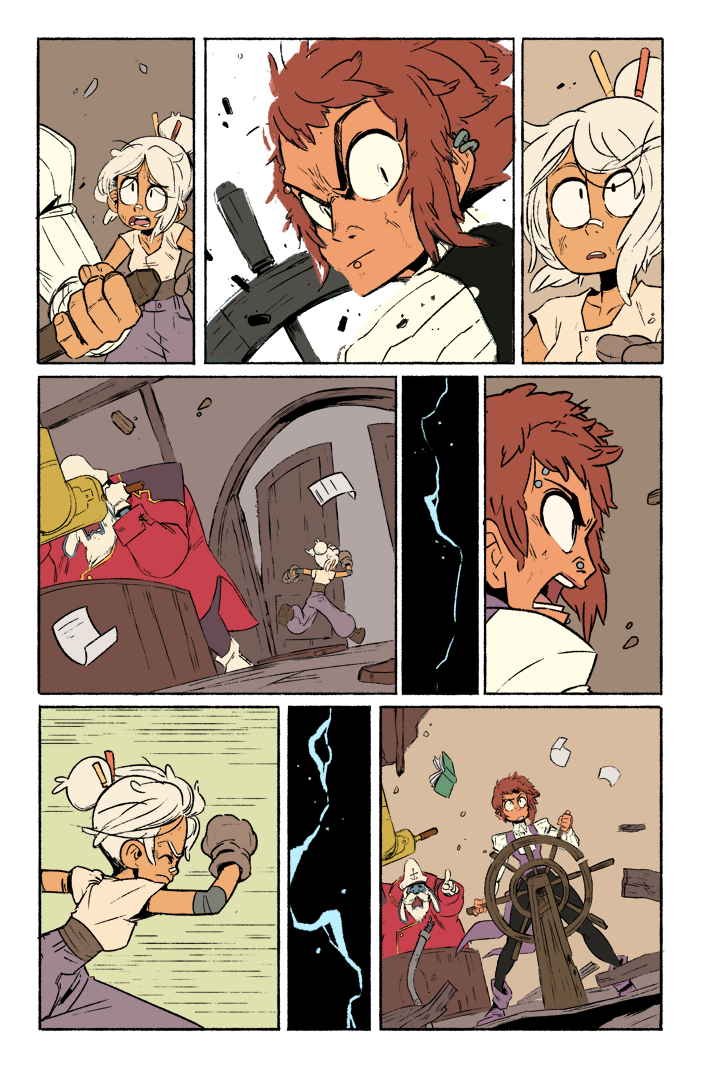 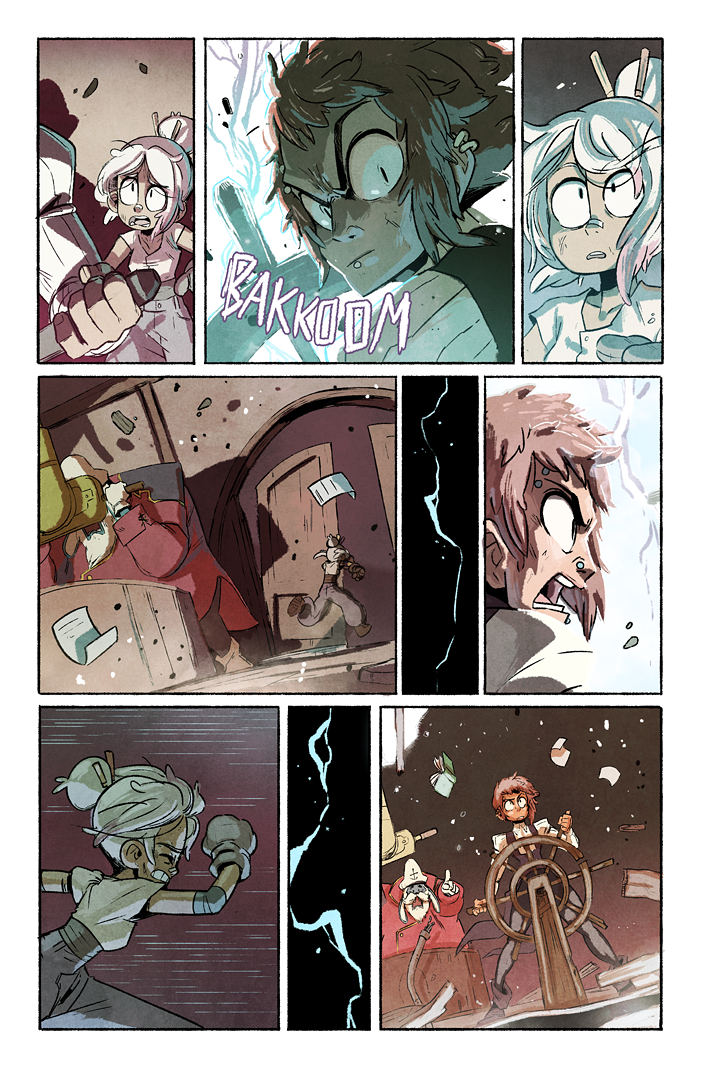 What you’ll see in these example pages are the four main stages of illustration process. First comes the layout sketch and then the final lines, which I will hand off to a coloring assistant. That assistant will then give back to me all the main shapes and details filled in with rudimentary basic colors, called “flats”. With all these flat colors in place I can then start editing them into the palette I want for a scene. For example if the scene is backlit like the captain’s room I’ll have to de-saturate and darken the palette, or blow it out for a bright outside scene. From there I will have two shading layers that go over the flats; one for highlights and one for shadows. Finally I place a watercolor texture that I made over it all to tie down the dirty look and that’s a wrap. The whole process usually takes about three and a half weeks, a couple days of writing on the weekends, and then hopefully a day off somewhere in between. And that is how a Diesel is born.

Check out the solicitation info for issue 1, out now. Issue #2 of Diesel comes out October 14th.

What’s to Love: We’ve been big fans of Tyson Hesse ever since we first discovered his webcomic Boxer Hockey. After cover stints on Adventure Time and Bravest Warriors, we put him to the test with the tricky mixed-media art style of The Amazing World of Gumball and he just crushed it. Now, we’re excited to be working with him on his first original series, a coming-of-age story with a cool fantasy airship twist that fans of Tank Girl, Rocket Girl, or Hayao Miyazaki’s Howl’s Moving Castle are sure to enjoy!

What It Is: Dee Diesel isn’t very good at anything. The daughter of the late Tungston Diesel, she has yet to live up to her father’s great reputation. Her rival has inherited control of her family’s airship and left Dee the only job she’s qualified for: working in a two-bit garage. But all that changes when a mysterious flying engine crashes into Dee’s life and takes her on a journey through the skies.