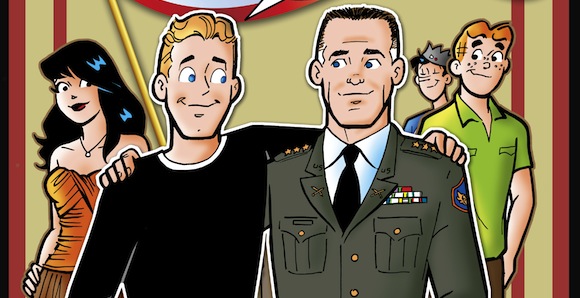 Speaking of bold moves in the realm of comics publishing, Archie Comics caught some attention when it debuted Riverdale’s first gay resident (ok, first openly gay resident, all you Jughead ‘shippers), selling out the issue with his first appearance and issuing a reprint for the first time in the company’s history. Then, AC showed that they wouldn’t be taking his popularity for granted when they announced that Kevin would be getting his own four issue miniseries, which would give him something of an origin story, and, if it did well, would lead to Kevin getting his own title alongside Archie, Betty, Veronica, and Jughead.

And again, AC showed that it would be taking Kevin’s character quite seriously when the synopsis for the first issue revealed that he is an army brat whose father was an army colonel, and it looked likely that the series would be pointing some meaningful subtle fingers at the policy of Dont’ Ask, Don’t Tell. Turns out, AC isn’t even bothering to be subtle.

The first issue outlines Kevin’s coming out to his dad, asking him if he should rethink his decision to pursue a military career.

“On the contrary! I don’t want to stop you,” Col. Keller says. “It takes a special person to serve their country. Someone with heart and courage!”

Jon Goldwater, co-chief executive of Archie Comics, told the Huffington Post that Kevin is “not meant to be a divisive figure in comics or culture,” but we’d be surprised (and more than a little impressed) if this didn’t get picked up by the larger media. Move over citizenship-renouncing Superman, and let the unnecessary hand-wringing begin. Although, when even Archie Comics has gotten around to taking a stand on Don’t Ask, Don’t Tell, it might be a good time to just agree with them and retire the debate.