Apple’s New Health App Tracks Everything But Your Period

If only an app a day kept cramps away. 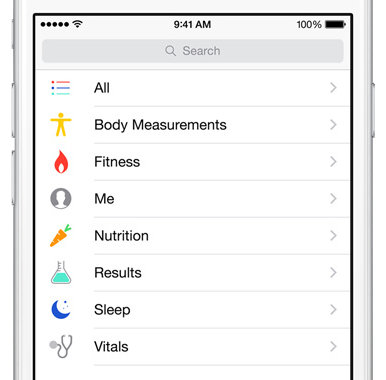 This Monday at the World Wide Developer’s Conference, Apple’s Craig Federighi introduced a brand new app for iOS 8 that, by its own marketing copy, purports to offer “your whole health picture” at a single glance. And yet it’s missing a very popular health app function among half its potential user base: a period tracker.

Which is really a bummer, since period trackers are great. I started using one a few years ago when my menstrual cycle started acting more like a random number generator than a mathematically predictable natural disaster and now I can tap a few things on my phone and tell you with certainty whether I’ll be having my period on next Christmas. The only problem with my period tracker is that the app is slow, buggy, and full of ads that take forever to load (I could get rid of the ads by paying for it, but that wouldn’t fix how slow and buggy it is, so I find myself less than inclined to fork over the cash). The same functionality, baked into a crisp, responsive Apple interface would have me swapping apps in a heartbeat.

So it’s too bad that Apple’s “Health” doesn’t appear to have any nods to the menstrual cycle at all. From Mercury News:

Since it was introduced in September, the Health app has been under fire for this apparent oversight, becoming part of the ongoing discussion of whether the gender gap among tech employees affects the industry’s products and services.

I doubt Apple engineers and product designers purposely excluded female users, although I think it’s worth pointing out that the company’s global workforce is 70 percent male. It’s also worth noting that there’s no indication the app was geared for men, although that has not raised as many concerns. Apple didn’t respond to my request for comment.

Mercury News’ Michelle Quinn noted that the app lacks other, simple, gender associated functionalities. It won’t remind you to perform a breast or prostate self-exam, for example. But the app does ask you to identify your sex, so there’s at least some nod to basic biological differences. Or, you could say that the app could easily know which set of extra features and reminders to use, based on the user’s identification. (Or if it wanted to be a bit more inclusive, it could just ask whether you have a prostate or a menstrual cycle or breasts.)

The question Quinn raises is whether this is a problem with Health, if it’s an oversight, or part of a purposeful effort to keep the app gender neutral. I agree with her that it seems a missed opportunity to include a common bodily function that both necessitates tracking due to its relatively long frequency and is comparatively simple to track (no step counter, no calorie database, no motion sensor, heck I did it with a whiteboard calendar when I was in high school). And while I think a lack of women involved in the project could have easily lead to a period tracker being de-prioritized in the development cycle, I wonder if tracking and predicting a menstrual cycle veered too far into “prediction” rather than “data collection” for the app makers to be comfortable. Apple doesn’t want to be in the position of giving out medical advice: they’re not a medical company. Even Health’s ad copy stresses how it’s going to interface with other health and fitness apps so that they can collect better data, not how the app itself will improve the user’s health.

Either way, I think the convenience and utility of an integrated period tracker in all iPhones would have sounded way cooler than any misgivings that it might have sounded not-cool to developers. Not only would it present a vital service to half their potential userbase, it’d be a great step on towards the continual destigmatization of menstruation.

(Seriously, if anybody has a period tracker they really like, sing out in the comments.)