Applebee’s and the Terrible, Horrible, No Good, Very Bad Week 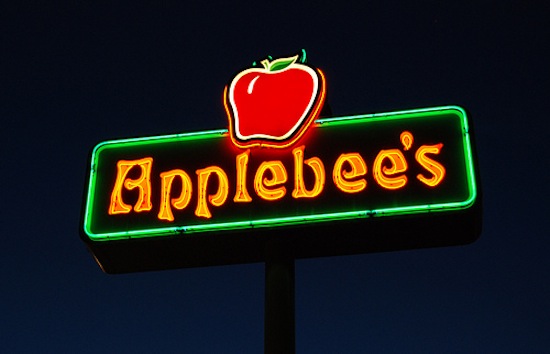 Well, it’s Wednesday evening, so chances are, by this point, you have a pretty good idea how this week is going. We hope it’s going well for you! If it’s not, though, take a moment to consider this — no matter how bad a week you’re having, Applebee’s is having a worse one. Between a PR meltdown that will be held up in communications classes as an example of how not to interact with your customers until the stars wink out in the sky and an assault on one of their franchises by no less than a figure of villainy than The Joker himself, the restaurant would probably like to just call in sick, pull up the covers, and go back to bed. And as loathe as we are to celebrate someone else’s misery… actually, I guess we’re not, especially when it’s this funny!

Applebee’s, the place to go for food when nothing else is open or you have a bunch of kids with you or something, has been in hot water since last week, when a franchise fired waitress Chelsea Welch for posting a customer’s receipt to Reddit. The customer, a pastor, pointed out that she tithed God 10%, so didn’t see why her waitress should get 18%. It began a bit of a firestorm, the customer, Alois Bell, took some public flack for her attitude towards servers, and Welch lost her job, which struck many folks as unfair, and they registered their disapproval with Applebee’s on the Internet, as people are wont to do these days.

I’m going to jump in here to say two things as a former server here for those of you who may not have worked in the business. Number one is just a fun fact that you might not know — there is no worse tipper on the face of the planet than someone who believes that they are going to heaven. Number two is more actionable — at 18% you still look like a cheapskate. 20% is standard, and the math is easier, too. Okay? Okay, good talk.

Now, I’d leave it there, and Applebee’s should have, too. They didn’t though, and the resulting PR fiasco from this weekend plays out like an object lesson in what not to do at every level of handling customer backlash on social media. Applebee’s PR wonks — or someone with the keys to the Facebook, anyway — took to Facebook to defend themselves, and defend themselves they did. From deleting the posts of people who disagreed with them to tagging individual posters and explaining in the most condescending tone available why they, and not their customers, were right. Frankly, Applebee’s, that’s an awfully high and mighty tone to take for a restaurant that is, culinarily speaking, one step up from 7-11 and exists mostly so people have a place to eat their lunch that’s not “in the car, listening to talk radio, and crying so gently you might not even notice it if you saw them.” If you want a great play by play of the whole grisly event, check out R.L. Stollar’s excellent coverage here.

And then, as if that wasn’t bad enough, The Joker showed up at a New York Applebee’s franchise. Well, not the actual Joker, but a guy in reasonably good Joker face paint with a buzz on who refused to leave when asked. 24-year-old Aaron Chase instead decided to drunkenly harass diners, which, really, seems kind of redundant. I mean, if someone’s already eating at Applebee’s what could you do to ruin their meal?

Chase was arrested by officers who put the Gotham City Police Department to shame by apprehending the Joker all by themselves, and was then taken to a nearby hospital for mental evaluation, presumably because Arkham Asylum was already full up. He is due back in court later this week, and we kind of hope he shows up dressed as The Joker again.