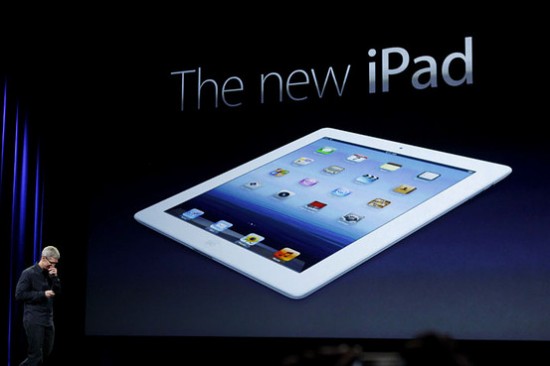 Earlier today, Apple unveiled the third generation iPad — simply named iPad — and it rang reminiscent of the iPhone 4S announcement. Sure, the hardware is an upgrade, and it’ll come packed with new-tech smell, but it won’t blow your mind, and if you bought an iPad 2 anytime in the last year, you won’t exactly be thrilled that it is now an older model, even though it’s not all that much worse than the newer one. All of the details, and the astonishing reveal that the new iPad doesn’t actually come with new-tech smell, below.

First off, Apple didn’t go with the previous iPad’s naming convention, and instead of calling this third-generation iPad the “iPad 3” or the rumored “iPad HD,” they’re simply calling it the “iPad,” so if you have the first generation iPad, you can pretend you have the new one until someone asks to see it and you have to tell them your iPad is at the cleaners or mechanic or something. So, instead of boring you, the new iPad details will be in bulleted list form, below:

Pre-orders for the new iPad start today, and the units become available on March 16, starting in the United States, United Kingdom, Germany, Canada, France, Switzerland, Japan and Hong Kong, then in 25 more countries a week later.

The iPad 2 will be offered at a cheaper rate once the iPad 3 hits the market, with the 16 GB model starting at $399.

Nothing too mind-blowing, but if you have an original iPad and skipped the iPad 2, the new third-generation iPad is probably a good place for an upgrade.

(image via The Wall Street Journal)