What Could $1.6 Million In Stolen Apple Products Look Like? 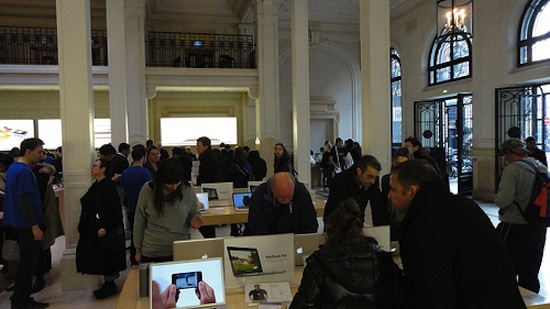 Whatever hangovers, hookups, or regrettable strikeouts your New Year’s Eve may have had in store, we’re prepared to say your evening was probably still better than that of Apple Store employees in Paris, who not only had to work the holiday, but spent it being held up by a team of armed robbers. Just one employee was slightly hurt, thankfully, but the robbers escaped in a van brimming over with Apple gadgets before police arrived on the scene. The company isn’t sharing the particulars of just what goods were nicked in this Grand Theft Apple, but they have put the price tag for the whole theft at about 1 millions euros, or close to $1.6 million. What goods could a theft that big from an Apple store have potentially netted the thieves responsible? We do the math below.

Assuming Apple is using the metric of what the stolen goods would have sold for at retail prices to determine their loss in the theft, a $1.6 million hit translates to the following hearty stacks of gadgetry:

It is of course highly dubious that any haul the thieves left with would be as homogenous as the ones above — reports indicate that gunmen were grabbing stacks of every available products they could find, and common sense suggests that small, easy to transport and fence products in that are in high demand would dominate the stolen goods — in other words, you’d expect to see lot of iPads and iPhones in the getaway van, and rather few iMacs.

Still, though, we can’t help but really root for existence of a team of thieves who committed a daring New Year’s Eve burglary just for the sake of escaping into the night with nearly 33,000 iPod shuffles, as we think you’ll agree that the image of them diving into pools of the pastel MP3 players like a crew of larcenous Scrooge McDucks is satisfying and oddly heartwarming one.