Amazon Throws Down the Gauntlet, Compares Kindle Fire to iPad Mini on Homepage 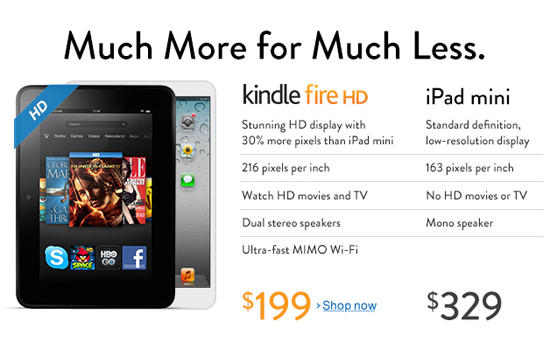 If you’re Amazon, the world’s largest online retailer, using your homepage to call out a competitor is one of the most prominent ways to do so. Following the iPad Mini announcement by Apple, there have been many comparisons made to Amazon’s Kindle Fire tablets. The majority of these have wondered how Apple intends to compete effectively when there are other options available that have higher specifications while still managing to be cheaper. Amazon’s asking the same question by directly comparing the capabilities of Apple’s offering to their own.

The “sick burn,” as the kids might say, basically amounts to Amazon poking fun at the fact that the iPad Mini’s display is your typical standard definition one while the Kindle Fire HD includes, as the name suggests, a high-definition screen. The online retailer also touts that their device includes a whopping 53 more pixels per inch than Apple’s, and their speakers are better. The real kicker comes when it’s time to talk pricing, though, as the Kindle Fire HD costs over $100 less.

The best part is that the homepage also includes a snippet from a recent Gizmodo article about Apple’s silly reasoning:

…your [Apple’s] 7.9-inch tablet has far fewer pixels than the competing 7-inch tablets! You’re cramming a worse screen in there, charging more, and accusing others of compromise? Ballsy.

The obvious implication here is that Apple’s competitors, like Amazon, are offering a way better deal. Given what we currently know about the iPad Mini, it’s hard to argue otherwise.