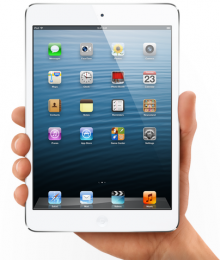 People really want to get their hands on Apple‘s latest devices, regardless of what they are. It is known. That’s why they’re such a big target when it comes to theft, and the iPad Mini‘s no different. With a caper that appears to be ripped straight from any generic heist movie, a pair of thieves managed to scamper off with two pallets of the gadgets — worth $1.5 million — from JFK airport late Monday night.

New York Post explains how they managed to pull it off:

The crooks arrived at Building 261 around 11 p.m. in a white tractor trailer marked with the name CEVA on the side, according to the sources. They pulled up to the side of the airport building that faces onto a street and has less security than the other side, which is accessible from the airport tarmac.

The thieves grabbed around 3,600 iPad Mini’s before taking off. They would have likely taken more, but were “challenged” by an employee returning from dinner, which spooked the duo and caused them to leave the rest. As of now, the two are still at large, and police suspect they had an accomplice let them in and out of the airport.

Amusingly, this is the same building where a 1978 heist saw $900,000 worth of jewelry and $5 million in cash disappear. Considering that this is yet another major heist from the same building, perhaps it’s time to rethink the airport’s security measures. Just a thought.