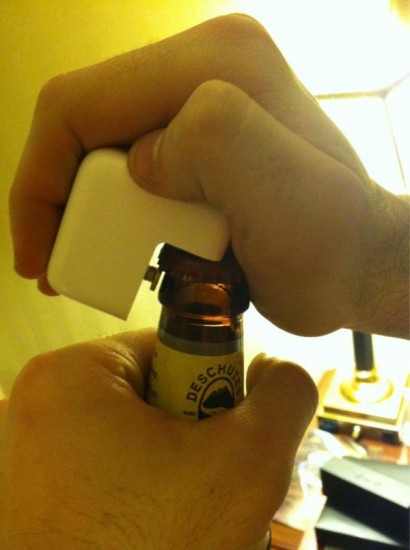 There are a variety of ways to open a bottle when a traditional bottle opener isn’t around. Here at Geekosystem HQ, we use Max’s belt, which, as you might’ve guessed, he’s wearing during the bottle opening process. It makes for an awkward moment or two when people who are unaware realize their beer is now crotchbeer. My favorite trick is the one where you bash the bottle cap on the side of a table, but that usually destroys part of the table. Twitter users @EvaZebra and @jesselupini have found another solution: The Apple iPad power adaptor. As seen in the picture above, it’s pretty much destiny.

The MacBook power adaptors don’t seem as destined for the job as the iPad adaptor, as the bottle opening area of the MacBook adaptor is more shallow. A first world problem if I’ve ever heard one.