I always thought she'd be more of a Samsung girl, myself. 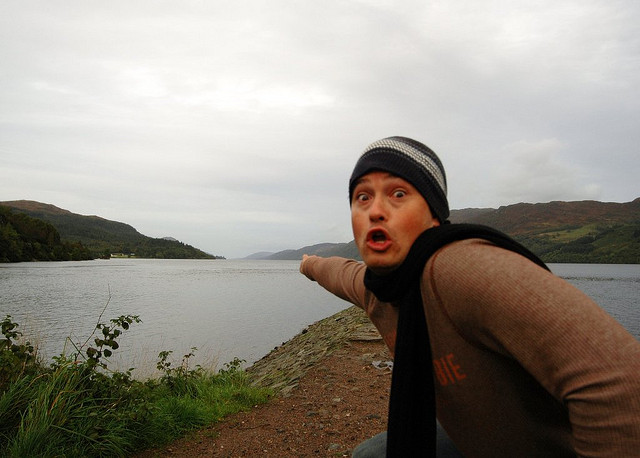 Exciting news for “Nessie” enthusiasts: the plesiosaur (be she myth or be she monster) apparently lives! “Credible” images of the elusive beast have been taken for the first time in a year and a half, but you might need to be a Mac fan to find her.

The Mirror is reporting that two different Apple users captured screenshots of something large under the Loch’s surface using Apple Maps on their iPhones and iPads, and as far as images of supposed living dinosaurs go, they’re fairly compelling. To my obviously highly untrained paranormal investigator eye, it’s pretty clear these aren’t pictures of a duck or a branch, and if it’s a sturgeon, it’s huge. 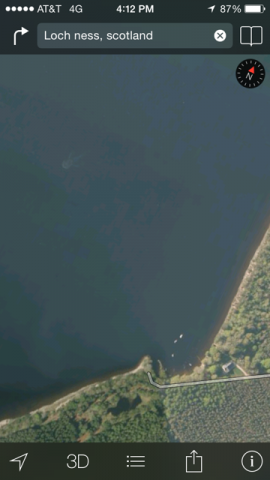 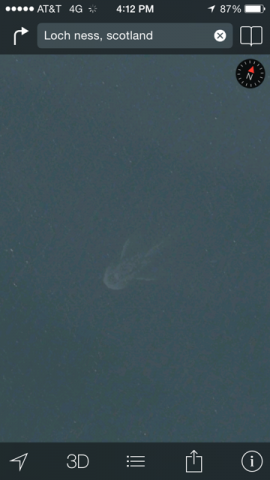 “Andy” of County Durham told The Mirror he wasn’t intentionally beast-hunting when he captured the screenshot:

it was by accident I came across it. I could see something big under the water and I saved it to my phone. My first thought was that it was the monster.

Gary Campbell is Head of the Official Loch Ness Monster Fan Club and holds himself responsible for scrutinizing all possible proof of Nessie’s existence. The Loch Ness veteran says, “It cannot be a boat as there is no hull. It’s just below the surface – the size would make it likely to be Nessie.”

The use of iPhones  to capture intriguing images of the Loch is an ironic twist in the search for Nessie. Last February we reported that sightings of the monster have rapidly decreased in recent years, possibly because increased technology and the higher picture quality offered by phones makes it easier for someone to identify and debunk false alarms. Said Campbell at the time,

Pretty much everyone now carries a camera with them in their smart phone – this allows then to snap what they’re seeing and means that we don’t just have to rely on eyewitness evidence.

It’s nice to know that the awesome power of technology isn’t depriving the world of all our myths or mysteries. In fact, in this instance it makes the search for Nessie an inclusive adventure non-Scots can participate in from the comfort of their home.

In the meantime, as Campbell says, “after Nessie ‘going missing’ for 18 months, it’s great to see her back.” Also good to know she’s firmly in the Apple camp.

Now everyone to Google Maps, quick!

(via The Mirror, image via Extra Medium)