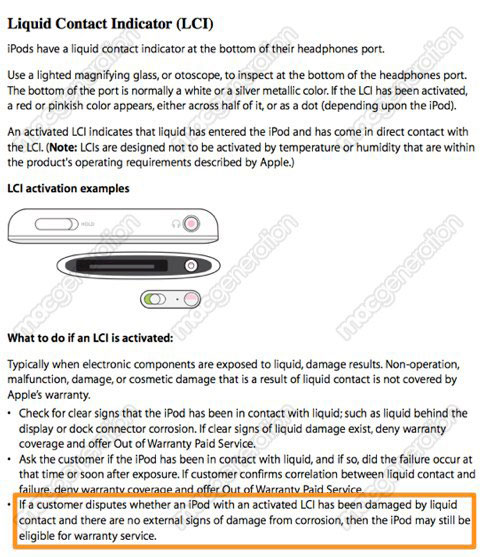 For years, Apple enforced a very stringent policy that greatly limited the warranty of their devices if they were exposed to liquids. This was taken further with the inclusion of Liquid Submersion/Contact Indicators (LSI or LCI) — small tabs that changed color in the presence of moisture.

This has remained an Apple use gripe for some time. Especially when a nameless user might have accidentally spilled black current juice all over his PowerBook while under the influence of Tequila and Law and Order SVU, turning his computer into a messy, unrepairable junk pile. But according to Appleinsider, this policy may be changing.

New iPod repair documents obtained by MacGeneration and posted on Appleinsider indicate that Apple may repair an iPod with a triggered LSI or LCI if:

…a customer disputes whether an iPord with an activated LCI has been damaged by liquid contact and there are no external signs of damage from corrosion, then the iPod may still be eligable for warranty service.

This change, though slight, likely springs from criticism (and lawsuits) of the LCI’s  reliability. Especially on iPods, where the LCIs are located within the headphone jack and exposed to the environment. This is certainly not a 180 for Apple, but for users just trying to get their music players to work it is a ray of light. And while it would be pure speculation to say that this is the beginning of a wider change in Apple’s repair policies for other devices, it is nice to see the famously monolithic company cutting its users a break.