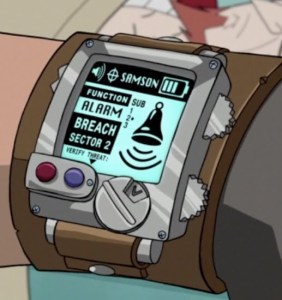 If you’ve ever pined for the days when you could speak into your wristwatch and ask it what time it is and it will tell you in a humanoid voice, it might be time to get excited. Apple is apparently developing wearable devices that will incorporate all the benefits and features of its fabulous new voice assistant, Siri. Google also has their crack team working on wearable devices that communicate with Android phones. So far, the only specific details entail a possible wrist device, but what does the future hold for computerized garments? Among the possible products of the future: glasses and contact lenses. Yup. Computers on your eyeballs.

In a report by The New York Times, both Google and Apple are developing wearable devices, because as you know, we are so incredibly encumbered as humans by having to physically hold our devices in our hands in order to use them. The main goal of the smaller, more streamlined and strap-on-able devices is to communicate with their larger, more handheld devices — smartphones — and then, in turn, sell even more of the latter. Because, I guess, people need that.

While Google isn’t leaking a whole lot of information, just that they intend to make things that are “peripherals” for Android phones, Apple seems to be testing prototypes for wristwatch-style devices:

One idea being discussed is a curved-glass iPod that would wrap around the wrist; people could communicate with the device using Siri, the company’s artificial intelligence software.

As we know, you can actually get a watch face to appear on the iPod Nano display and attach that to a watch band. Ironic, since the advent of cell phones has all but eliminated the need for watches except for fashion purposes (for many of us, at least). And, sure, it’s a nifty idea to have a watch that can perform some of the basic functions of a smartphone while integrating the devices. But the best part about this, at least to me, might just be that we are finally going to get computer watches like they have in cartoons. If they have the capabilities for Face Time? Come on! That’s perfect!

It doesn’t end there.

Michael Liebhold, a senior researcher specializing in wearable computing at the Institute for the Future in Palo Alto, Calif., predicts that the next step in technology is the blurring of the real and virtual worlds.

Over the next 10 years, he says, he envisions that people will be wearing glasses with built-in screens and, eventually, contact lenses — with working displays.

“Kids will play virtual games with their friends, where they meet in a park and run around chasing virtual creatures for points,” he said.

Those in the know also say that such technology would directly benefit the fashion industry, providing the most three-dimensional model designers could ever hope for. Next thing you know, these things will be able to monitor our various bodily functions, detect diseases, predict our thoughts … Um, I feel like I saw this kind of thing on the Terminator 3D ride at Universal Studios, but okay!

(The New York Times via TUAW)