Apple Has So Much Money it is Giving Some Back to Shareholders With Dividends, Share Buy Back 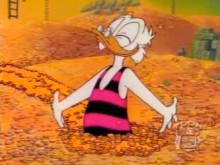 Apple’s CEO Tim Cook has announced that the consumer electronics giant — and world’s most valuable company, be-tee-dubs — will be paying shareholders a dividend of $2.65 a share starting this July — the first since 1995. On top of that, the company will also launch a $10 billion effort to buy back shares of its stock, further bolstering its value. The move comes as Apple is enjoying record profits and the launch of a new iPad, and frankly has more money than it knows what to do with.

Last year, Apple announced that it had $97.6 billion in cash more or less just sitting around. Many have speculated what, exactly, the company was going to do with its swimming pools full of money, and now Cook has some insight to offer on that subject.

The BBC quotes Cook as saying:

“We have used some of our cash to make great investments in our business through increased research and development, acquisitions, new retail store openings, strategic prepayments and capital expenditures in our supply chain, and building out our infrastructure […] Even with these investments, we can maintain a war chest for strategic opportunities and have plenty of cash to run our business. So we are going to initiate a dividend and share repurchase programme.”

Basically, even though Apple is going to spend about $45 billion in the next three years, it still has so much money that it’s going to make its investors feel good. And that’s a smart move, considering that many tech companies just now entering the market are struggling to show their worth. Though Apple’s stock is at a record $600 per share (totaling some $500 billion), paying dividends and buying back stock — which will only shore up its value — is a strong message to investors that Apple is now a mature, profitable company with longterm stability in mind.

It’s also no doubt part of an effort to assure investors that even without the late Steve Jobs at the helm of the company, it will continue to bring in scads of cash. Considering the impossibly meteoric second wind the company enjoyed under Jobs from the late 1990s on, getting its investors to settle in for the long haul is probably a good idea. Case in point: The BBC says that Apple shares were trading at $10 a share about a decade ago.

I’m kicking myself for not buying shares back in 1999.