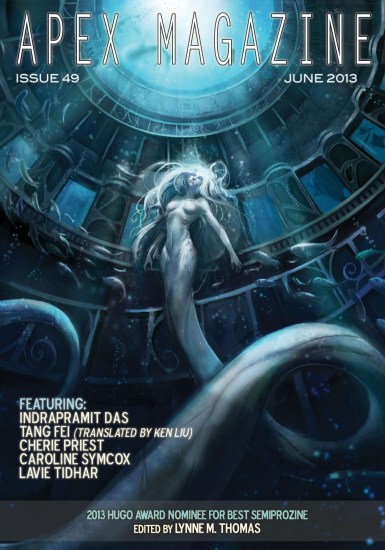 The Mary Sue is pleased to present strange, beautiful new fiction from Apex Magazine each month. This month’s story, from Apex Magazine’s current issue, is “Karina Who Kissed Spacetime” by Indrapramit Das. Take a look…

I always remember snow speckling the orange cone of streetlight that held my first kiss. It wasn’t snowing that night. This was before time fractured, left me slipping through its cracks like a bead of water. Perhaps it had been snowing in some other timeline during that first kiss. But not that one. It had barely been a first kiss, even. But it had been cold–cold enough to turn gutter water to slippery glass by our feet.

The party over, we stood outside the Arts House, on the frozen curbside corner of West James and North Pine. On the wooden stage of the porch, a sparse audience of smoking spectators, glancing at us from behind conversations. I was heading back to the International House. She was walking up Pine to her off-campus apartment, a sign of her status as a senior, a quiet reminder that she would be graduated and gone by the time I became a junior. When I returned to campus from India a week earlier, I’d told her, “I’m so sorry I didn’t hang out with you more last year.” Like an adrenalin shot to the chest, her answer: “Then don’t waste this year.”

And then that moment in front of her, oceans and continents away from home, the requisite outsider, creature of introverted pathos and facile self-pity, faced with the unfathomable spectre of romance that had evaded me for twenty one years. Face to face with Karina, I was drunk on my own virginal sweetness–a thick honey waiting in my steaming mouth, enriched by her attention. I was drunk on her dazzling erudition, her preposterous loveliness. We hugged. I, under-dressed international student shivering in Pennsylvanian winter; she, bespectacled American woman hidden in the raven-winged grasp of a thick overcoat, the wintry romanticism of Russian genes sleeting across her pale face in freckles. If I look at photographs of Karina from now or then, she will be beautiful, but never as beautiful as that night, or that year.

“You’re too tall,” she said as we held the embrace, because I had to bend down.

I felt her laugh silently, chin on my shoulder. A moment of quiet. “Thank you,” she whispered into my neck, making the hair there stand on end. Her arms slipped away, fingers tracing the hidden furrows of my jacket-clad ribs. She stood on tiptoes and pushed her mouth against the corner of mine, leaving a trace of moisturizing gloss. So brief it was; the mere ghost of the future. I watched her walk away. Even then, I saw the ripple of spacetime warping behind her as she walked under the pools of streetlight that demarcated the pavement of North Pine. Her kiss, drying quickly in the winter air.

I looked up, and the sky was an open darkness.

Like burning ice, the tingling of that kiss rimed my entire face, numbing me as I walked. I knew what it held, then. I knew that it was a small, clear seed that she had left on my skin, that in two days it would blossom into a hard ache in my chest, leading me to ask her if she wanted to meet up, the two of us. She’d meet me in front of the Arts House again, and we would duck into its incongruously empty living room, our clothes dappled with rain. Outside, visible through the panes of the front doors, those perpetual smokers, mingling tobacco fumes with clouded breath so they seemed to exist in a timeless fog on that porch.

But soon, even they would disappear, leaving Karina and I alone in that crimson-walled lounge, cross-legged on the carpeted floor, feeling for all the world as if there were no one else in a dorm house that housed twenty students. In the milky glow from a corner-lamp by the sleeping TV set, she would give me a Tarot reading, laying the colourful pieces of my possible future between our shoes (her small converses staring at my unwieldy sneakers). Death would appear in the cards.

Predictably, I’d say of this omen: “Should I be afraid?”

“No. It just signifies change in your life,” she’d say with a smile, under the ominous grey cowl of her hoodie. She would throw the hood back soon after, oracle revealing herself. The zipper on the hoodie would already be parted just enough to show the dampness of her neck, her naked collar bones. Anxiety eating at us both, she’d get up to leave, to finish an essay for a class. We would hug, only to find each others’ lips, tongues touching as if we’d done this a hundred times before. We’d sink gently into the couch, glasses clashing as we kissed, Tarot cards and Xbox controllers at our feet, our dimmed reflection framed in the TV set. Her wet hair running clammy trails across my cheek and chin. A click of flesh, and our mouths would part.

“You really do look like Death,” I’d say to her in a throaty whisper, slurring on my recognition of this moment’s importance. I would say this for a reason. Karina had told me once that she had met a famous author, who personified Death as a young, black-haired woman in his fiction. She told me that the author let her know that she “looked like Death.” Not a harsh pun, but a compliment. Presenting this shard of her past to her, I’d place my hand against her warm cheek. She’d straighten my glasses in response, perhaps as stunned as me, and leave to write her essay.

This is what I saw after my first kiss on West James and North Pine, walking back home under the watchful pines. I saw that second kiss, more befitting the name of a first. I saw that future grow out of the trace of lip gloss left on me by Karina. An oracular infection opening its eyes. I went on to fulfill this germ of destiny, giddy in its fevered ecstasy. I kissed her in two days, Tarot and Xbox controllers by our feet.

That second kiss only strengthened this contagion. As I walked home, I also walked across time to when she’d find out that I was a virgin, that she was the first person I’d kissed. She’d be taken aback, but consider the options. She’d ask me if I was ready to be in an open relationship, no strings attached, because she was getting over a terrible breakup. I saw myself lying, saying that I was ready, ensuring the agony to come a month later at a basement party. There, I’d see her making out with her ex-boyfriend amid the hedonistic tangle of dancing bodies.

The same night, she’d hold my hands and tell me under the pulse of dance music: “I’m sorry, babe. I’m not getting back together with him. I love him. I’m sorry. But I don’t want a guy like him in my future. I want someone who’s sweet to me. Someone who’ll stay with me. Someone who’ll marry me. Someone like you.”

But she’d be drunk when she said this to me, and so would I.

After my second kiss, I became lost to the possibilities of this splintered line in the sheet of spacetime. If I let myself fall across the cracks of other timelines, I saw myself meeting other women, or not, I saw myself remaining a virgin till I was old, sometimes till I was dead.

So I returned to the point at which the cracks diverged. The spot of spacetime that held West James and North Pine on that winter night in Pennsylvania, when Karina broke its surface by kissing me. I returned there and retraced that path. I saw us both making the mistake of thinking this was the right time for us to do whatever we were doing. I made those mistakes, because she was my first kiss. There were other first kisses, and in some futures, there were none. But they all came after that first, one way or the other.

As I looked up at the silent pines of some uncertain time, those glistening stars, I knew that I’d eventually stand under a different night sky with Karina. Near the end of her senior year. On the rooftop of the International House, looking at moonlight glazing the ice. She’d tell me with her perfect sense of mordant irony, “This is so romantic,” before placing one kitten-scratched hand on my chest, as if to prevent my heart breaking. Her other hand she’d place in mine, our interlaced fingers very cold. “I don’t think we should see each other anymore,” she’d say, as she must. Lancaster glowering under the silvered sky, clouds brushing invisible cracks stretching across aeons of vacuum, connecting the sharp gravitational pinpoints of the stars.

“Please don’t,” I’d say, slipping into my vulnerability as if it were an old, comfortable cloak. The divine return of romantic solitude, of the eternal Virgo across all times, stretched across the cosmos above us in the unseen shape of a naked woman. Death unclad.

“Because you never get angry,” she’d say. “Because you shouldn’t let people walk all over you. I don’t want to hurt you anymore.” I’d bow my head in silence, not telling her that I did get angry. I just never showed her this anger, not in this timeline.

“I do care about you, a lot. You know that. We can be friends, can’t we?” she’d ask, and I would nod, knowing, knowing that we couldn’t.

She’d bend forward and press her cold lips against my sullen mouth, lingering for a moment. It would seem like my first kiss. With Karina, the unknowing vector, in front of me at the end of winter instead of the beginning.

She’s married now. Not to me. This is as it should be. I don’t know what cosmic virus made her a vector, or for what reason, or if she ever realized the shattering wake she left in spacetime. I don’t know if her other boyfriends felt time fracture at her touch. All I know is that the oracle in me has closed its eyes. The infection is gone, or perhaps inert, an invisible helical alien curled around my heart, born on the corner of West James and North Pine.

But I didn’t waste that year. I hope Karina didn’t either.

Please visit Apex Magazine (www.apex-magazine.com) to read more great science fiction, fantasy, and horror.
This story is from issue 49 (June, 2013). The issue also features fiction by Tang Fei (“Call Girl”, translated by Ken Liu), Lavie Tidhar (“Titanic!”), and Cherie Priest (“Reluctance”), nonfiction by Caroline Symcox (“A Believer in Fandom: Can Geek and Christian Mix?”), and an interview with Cherie Priest.
Each issue is free on our website, but Apex sells nicely formated eBook editions for $2.99.

You can find more Apex Magazine stories on The Mary Sue here.