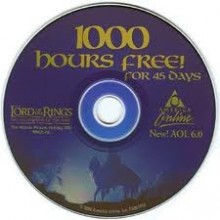 In light of AOL’s headline-making purchase of TechCrunch and its efforts to rebrand as an online media company, an interesting note about the company’s business as it currently stands: 40% of AOL’s revenue still comes from selling dial-up Internet subscriptions. To whom, we have no idea.

While the company continues to invest in its new strategy, its business hasn’t moved much beyond its old one: More than 40% of its revenue still comes from selling dial-up Internet service and related subscription products, the legacy business it has been trying to shed for years.

Advertisers like the idea of making AOL a go-to place for buzzworthy news and entertainment. But they aren’t convinced it will work.

This despite owning the likes of Engadget, Joystiq, Urlesque, TMZ, and now, TechCrunch, with more media acquisitions rumored.

According to an NPR report, AOL had 5 million dial-up subscribers at the end of May, but was losing them at the steep rate of 3 percent per month. (Let’s charitably guess that that’s about 4.5 million now; 5,000,000(0.97^4) is actually a little lower.) At that, AOL is committed to its new focus on content over its old focus on subscriptions and other, diminishing streams: Explaining AOL’s rebranding, CEO Tim Armstrong said that “We’re 25, so we’re roughly just getting out of college.”