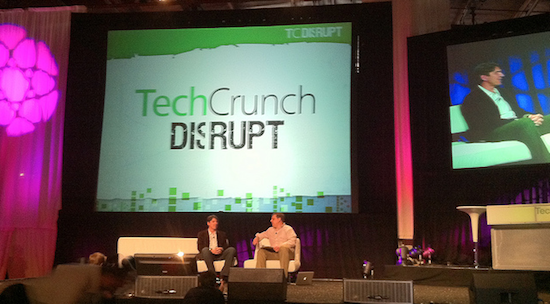 Wow. The rumors are true: AOL is buying TechCrunch, and it’s going down at TechCrunch Disrupt right now, with TechCrunch founder Michael Arrington and AOL CEO Tim Armstrong taking the stage to announce the purchase.

Update: A few more relevant details: Arrington will be staying onboard for three more years, and TechCrunch has signed an agreement guaranteeing what they say is complete editorial freedom — Arrington said that “if someone releases leaked AOL documents to us, we can publish them with complete freedom.”

Contrary to Robert Scoble’s surmise earlier today that the sale would likely have to be “between $50 million and $75 million,” partly as a means of Arrington sticking it to longtime rival Jason Calacanis, who sold Weblogs Inc. to AOL for $25 million, TBI reports based on the word of a “second-hand source” that the deal will only be worth about $25 million, which would be low based on TechCrunch’s yearly revenue of $10 million; however, they note that “It’s possible that the $25 million is just an initial payment and that the price could include an earn-out for excellent performance.”

Update2: CNBC is now reporting that the price was $40 million.

Update3: Quite a day for AOL: They’ve also announced that they’re acquiring Thing Labs (maker of Brizzly) in addition to TechCrunch and their earlier purchase of 5min Media.

Here’s the press release announcing the purchase: (yoinked from MediaMemo)

San Francisco, CA, September 28, 2010 – AOL Inc. [NYSE: AOL] today announced that it has agreed to acquire TechCrunch, Inc., the company that owns and operates TechCrunch and its network of websites dedicated to technology news, information and analysis. TechCrunch and its associated properties and conferences will join the AOL Technology Network while retaining their editorial independence, further bolstering AOL’s position as one of the world’s leading providers of high-quality, tech-oriented content. The announcement will be made on stage at TechCrunch Disrupt in San Francisco, CA.

Founded by Michael Arrington, TechCrunch operates a global network of dedicated properties from Europe to Japan, as well as vertically-oriented websites, including MobileCrunch, CrunchGear, TechCrunchIT, GreenTech, TechCrunchTV and CrunchBase. The TechMeme Leaderboard ranks TechCrunch as the No. 1 source of breaking tech news online, followed by AOL’s Engadget.*

“Michael and his colleagues have made the TechCrunch network a byword for breaking tech news and insight into the innovative world of start-ups, and their reputation for top-class journalism precisely matches AOL’s commitment to delivering the expert content critical to this audience,” said Tim Armstrong, Chairman and Chief Executive Officer of AOL. “TechCrunch and its team will be an outstanding addition to the high-quality content on the AOL Technology Network, which is now a must-buy for advertisers seeking to associate their brands with leading technology content and its audience.”

Heather Harde, Chief Executive Officer of TechCrunch, said: “TechCrunch and AOL share a motivating passion for quality technology news and information, and we’re delighted about becoming part of the AOL family. This represents a compelling opportunity to extend the TechCrunch brand while complementing the great work of sites like Engadget and Switched. Our contributors, and our audiences, can look to the future with excitement about what we can build when we have the significant resources of AOL behind us.”

Michael Arrington, Founder and Co-Editor of TechCrunch, said: “Tim Armstrong and his team have an exciting vision for the future of AOL as a global leader in creating and delivering world-class content to consumers, be it through original content creation, partnerships or acquisitions. I look forward to working with everyone at AOL as we build on our reputation for independent tech journalism and continue to set the agenda for insight, reviews and collaborative discussion about the future of the technology industry.”

“Engagement with thought leaders is as important to AOL as our engagement with our contributors, audiences, publishers and advertisers, and TechCrunch’s conferences and websites will give us a promising, additional springboard to join and amplify these conversations. We’re committed to quality in everything we do at AOL, and look forward to working with Heather, Michael and the TechCrunch team to extend the brand,” said David Eun, President of AOL Media and Studios.

The AOL Technology Network consists of AOL’s tech-oriented properties including Engadget, the Web magazine about everything new in gadgets and consumer electronics; Switched, which covers the intersection of the digital world with entertainment, sports, art, fashion and lifestyle; TUAW, the unofficial Apple weblog; and DownloadSquad, the weblog about downloadable software and other computer subjects. The AOL Technology Network ranks in the top five for tech news according to comScore Media Metrix, August 2010 data, and leads the top five in average time spent and average visits per user.

This acquisition will further AOL’s strategy to become the global leader in sourcing, creating, producing and delivering high-quality, trusted, original content to consumers. TechCrunch will remain headquartered in San Francisco, CA, as a wholly owned AOL unit. Deal terms were not disclosed.