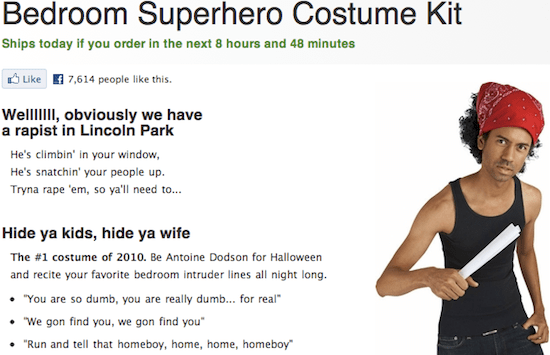 It was probably inevitable that someone would try to make a Halloween costume capitalizing on the online celebrity of Antoine Dodson, whose colorful appearance on a local news report gave rise to the Gregory Brothers-produced, Billboard Hot 100-charting “Bed Intruder Song.” And someone has done just that! For $24.99, you can buy a “Bedroom Superhero Costume Kit” (pictured above), which consists of a black tank top, a black wig, and a red bandana, and which sounds from the product description like it just might be inspired by Antoine Dodson:

Welllllll, obviously we have a rapist in Lincoln Park

He’s climbin’ in your window,

He’s snatchin’ your people up.

Hide ya kids, hide ya wife

The #1 costume of 2010. Be Antoine Dodson for Halloween and recite your favorite bedroom intruder lines all night long.

Antoine Dodson himself is not a fan of the Halloween costume homage/cash-in, however: Writing on Facebook, he compared the costume makers to rapists. (!) “These people down here, are raping me and my family for real!. they don’t have my permission to be selling this costume.”

While you may have seen Dodson-themed clothing and merchandise on the Internet and in real life, a lot of this is actually authorized by Dodson himself, and he gets a cut. Dodson recently revealed to Us Weekly that he bought his family a new, safer home with the proceeds from his music and merchandise sales.

On the one hand, it’s not like Dodson has a trademark on black tank tops and red bandanas; on the other, it seems pretty clear that these costume makers are trying to cash in on his fame and persona. Internet memes are people too, and while it seems doubtful (in this nonlawyer’s opinion) that Dodson could or would undertake and win a lawsuit here, it seems skeezier for costume-makers to cash in Antoine Dodson without giving him a cut than if they did the same with, say, a more entrenched celebrity like Katy Perry. Plus, $25 is way expensive for what you get.