N.K. Jemisin’s #AntiFascistSFF and Gail Simone’s #ComicsHateNazis Are the Inspiration You Need on This Monstrous Day 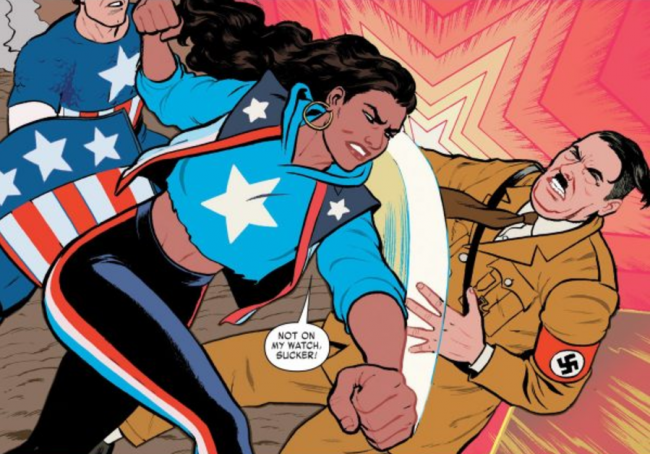 I assume most of you have been following the horrendous demonstration down in Charlottesville, as well as Trump’s callous and absurd-false-equivalence response to it. If you’re anything like me, this display isn’t necessarily surprising – but it’s sure as hell demoralizing and disturbing.

You’re not alone in feeling this way – but luckily N.K. Jemisin and Gail Simone are here to remind us why and how we keep fighting.

Author N.K. Jemisin, who just took home the Hugo Award for Best Novel for the second year in a row, should have spent today celebrating her accomplishment. Instead, she woke up to this. “Mentions full of congratulations… and Nazis,” she tweeted. “…It’s frankly hard to enjoy my success when racism, anti-Semitism, & the obvious corruption of the Charlottesville PD are on display.”

And so she started up the hashtag #AntiFascistSFF to counteract this feeling.

I know what’ll help this feeling. Tweet your fave anti-Nazi, pro-equality, “let’s fix this ish” lines fm SFF. One of mine: #AntiFascistSFF pic.twitter.com/yzFPH7euHp

I’ve found the resulting quotes so inspiring. SFF contains all this wisdom about how to recognize one’s true enemy, how to fight back, and how to remember to love yourself in the face of monstrosity. Below are just a few of the quotes that cropped up. I encourage you to peruse the whole tag.

“The weak can overcome the strong if the weak persist. Persisting isn’t always safe, but it’s often necessary.” – Octavia Butler

Thank you for sharing this idea! pic.twitter.com/UGZxiXpKPP

“No voting on who gets to be people.”

“No. YOU move.” (Though they fucked with Cap something awful recently, I still have faith.) pic.twitter.com/ojRCq3j6sN

And the internet obliged.

Bombshell, like all good Titans, hates her some Nazis #ComicsHateNazis pic.twitter.com/0Hu63EJrBf

#ComicsHateNazis My late friend Jack Burnley drew this. A favorite. Superman could just fly but he wants the Nazis to see he’s coming. pic.twitter.com/EhyFqpYKVD

Yes, these examples are fictional. And yes, it’s far more important that we fight white supremacy in the real world, by donating to organizations like the NAACP, having tough conversations with our family members and friends, showing up to protests, calling our representatives – or just refusing to shut up when we see bigotry. However, fiction can make us feel less helpless, and it can remind us what we stand for. With science fiction, fantasy, and comics in particular, these imagined worlds and heroes can remind us what kind of person we want to be, and what kind of future we want to create. We need those reminders, and those inspirations, on days when it’s easy to despair at humanity.

As Jemisin tweeted before she signed off to do some work, “Ideas can change the world.”

Gotta go offline to get work done, but thanks, folks, for all the #AntiFascistSFF. Ideas matter. Ideas can change the world.