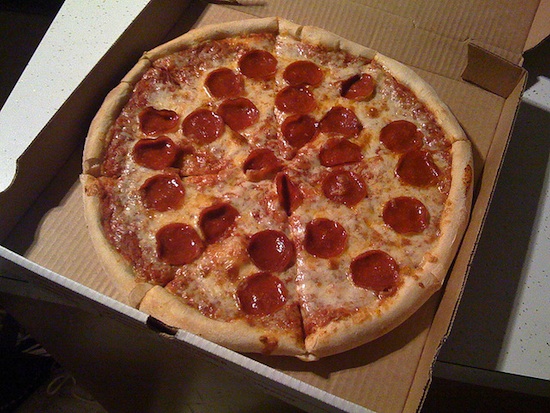 Okay, look: No one thought pizza meat was a thing that was good for us. (If you’ve been laboring under that delusion, we apologize, but yeah, it’s not.) Up until this morning though, most of us were able to suspend our disbelief on that front, for the sake of,  “Come on, you guys, it’s a slice of pizza. I quit smoking, what do you WANT out of me?”  We calmly reassure ourselves — usually somewhere around the 3rd of 4th slice — that pepperoni is probably not actively bad for us. Wrong. According to a study published today in the online journal mBio, yes, Virginia, pepperoni is totally helping bacteria murder you every time you eat it.

Before they get put on your pizza, pepperoni and salami are commonly shot up with a bacteria that produces lactic acid, which make the sausage acidic enough to kill any gnarly pathogens — like for example salmonella or e. coli — that may have been in the raw meat. That raw meat, though, is full of antibiotic residue from back when your delicious sausage was still a pretty healthy pig. The same stuff that kept the pig hale and hearty, though, might be making us less healthy by shooting the food safety process in the foot, accidentally killing the very bacteria that are supposed to clean the sausage before it hits your pie.

According to the study, carried out by a team of researchers in Ireland and Denmark who are apparently dedicated to taking away the last good thing, US and EU regulated “safe levels” of that residue are strong enough to kill lactic acid producing bacteria in short order. The antibiotic residue is not tough enough to kill the bacteria like salmonella that the lactic acid was supposed to kill in the first place, though. Nope, that stuff just sticks around to wreak havoc on more than a million intestinal tracts annually, according to the most recent CDC figures.