No, Those Cardboard Beds at the Tokyo Olympics Weren’t Made to Stop Athletes From Vaulting That Pole 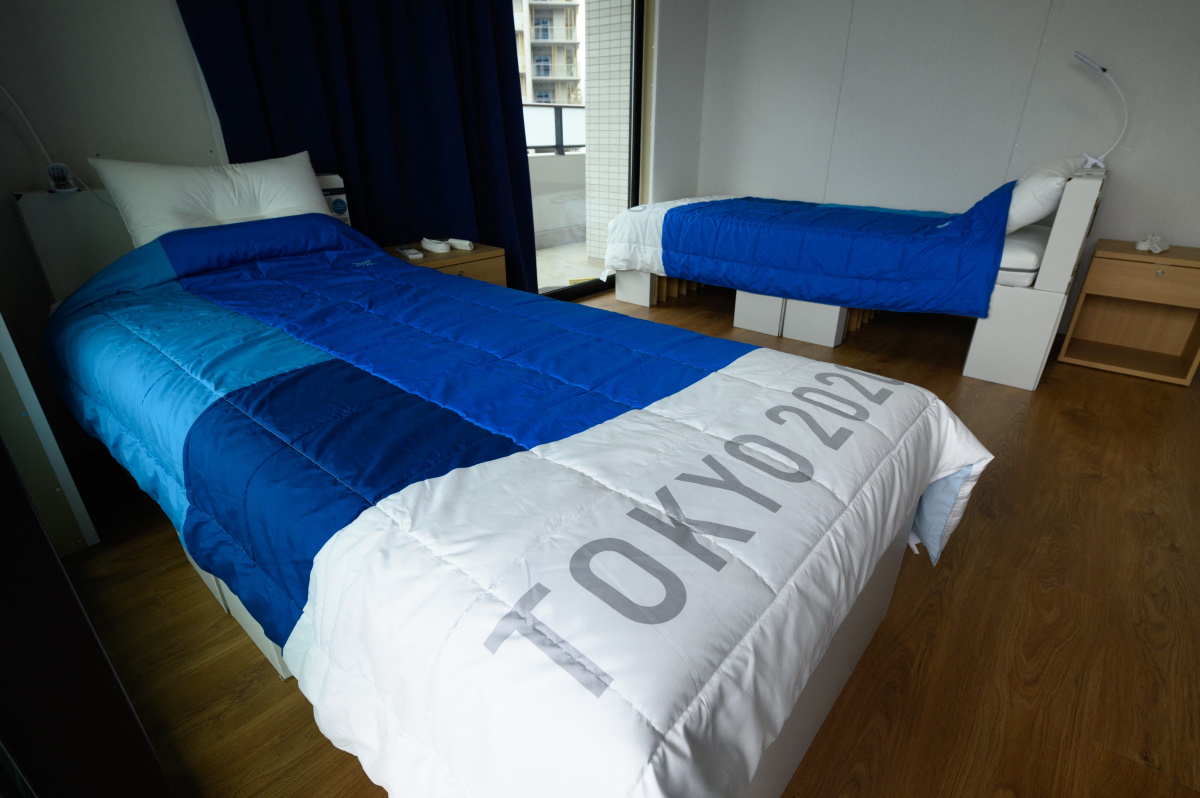 Rumor has it that, in an attempt to discourage athletes participating in the 2021 Tokyo Olympics from having sex (because, you know, COVID), cardboard beds were constructed that would collapse if one were to apply, um, too much pressure to them. It turns out the beds weren’t made for the purpose of preventing athletes from sticking the landing; they were actually discussed before the pandemic for the purpose of using recyclable materials.

USA Today did a story on the beds back in 2019, meaning that the beds were always going to be part of the Tokyo Olympics. At no point were they said to be made to prevent sexual activity.

Takashi Kitajima, a Tokyo 2020 organizer in charge of the Athletes’ Village, told media members Tuesday that the aim of the cardboard beds was to provide comfort for the athletes while simultaneously securing sustainability — one of the main themes of next summer’s Games.

“(The beds) will be recycled into paper products after the Games, with the mattress components recycled into new plastic products,” a news release read, per Inside The Games. “This will be the first time in Olympic and Paralympic history that all beds and bedding are made almost entirely from renewable materials.”

So, how did we go from sustainability to, well …?

I wonder if the most physically gifted people on the planet can figure out how to have sex standing up pic.twitter.com/9PS0sPJFfI

Side note: Even if this anti-sex take has been debunked, that is a fascinating thread to go through for the sheer purpose of seeing the reactions from those who didn’t know that the Olympics have a “worst-kept secret” type history about how much goes on over, under, and around the covers—so much so that athletes have been given condoms since the 1988 Seoul Olympics.

What I’m confused about is the need for this?? Is it an Olympic tradition to be fuckin around everyday??

That article from Japan Today may be the first source of how this story spun out the way it did. No, this article didn’t say that the beds were anti-sex, but it does reveal that the Tokyo Olympics Organizing Committee encouraged athletes to NOT use the condoms they were given and to, instead, wait to use them when they got home. “Our intent and goal is not for athletes to use the condoms at the Olympic Village, but to help with awareness by taking them back to their own countries.”

The article continues with the following:

The committee has also said it’s reexamining the specific distribution process, implying that perhaps they won’t be given out until after the Games are done and athletes are leaving the village. But if organizers don’t want athletes having sex until they’re back home, then why do they feel the need to give them condoms while they’re in Japan? For starters, the Organizing Committee cited the IOC’s stated objective of using the Games as a platform to promote awareness of the dangers of HIV. However, an athlete going back to their home country and saying “Hey, let’s try out my Olympic condom I got in Japan” doesn’t seem like it’s going to raise awareness of safe sex in anyone other than their specific partner for that night.

Though not directly mentioned by the Organizing Committee, odds are two practical issues are playing a larger role. First, organizers may be resigned to the eventuality that no matter how much they discourage it, a number of athletes might still have sex while they’re in Japan, and thus feel obligated to provide condoms, since that’s been part of Olympic Village accommodations for decades now. In addition, the contracts and payments to the four Japanese manufacturers for their 160,000 condoms were probably locked in some time ago. If the Organizing Committee is stuck with the bill, and the manufacturers want the PR boost from being official Olympic suppliers, there’s not much left to do except distribute them to their originally intended recipients, though maybe they should get Japan’s condom ambassador, gravure model Airi Shimizu, to help stress the “Don’t use them until you get home” part.

With COVID again being a growing threat (to the point that athletes are now testing positive), it makes sense that the committee is trying to encourage athletes to NOT have sex while they’re there. However, they probably, as that Japan Today piece says, already had the condoms ordered because yes, that is a thing that is budgeted for—Rio has the record, by the way, with 450,000 condoms passed out in 2016. So now they’re telling athletes to not use the condoms until they get home and are instead passing them out to *checks notes* raise awareness.

This bit of news, combined with pictures surfacing of the cardboard beds, and the massive number of people who are wondering WHY we’re even having the Olympics right now, is what I think created the anti-sex bed narrative we got. It blended together to create misinformation—albeit entertaining misinformation—from media outlets, social media, and even other athletes.

Beds to be installed in Tokyo Olympic Village will be made of cardboard, this is aimed at avoiding intimacy among athletes

Beds will be able to withstand the weight of a single person to avoid situations beyond sports.

I see no problem for distance runners,even 4 of us can do😂 pic.twitter.com/J45wlxgtSo

And, I mean, once it breaks it’s just a thin-looking mattress on the floor, right? Do the floors also collapse when fucked-upon?
Where do the sex booby-traps stop?

Considering the lengths the committee is going through to host the Olympics under pandemically awful circumstances, the idea that they’d make a bed box meant for a family of cats instead of multiple human beings with pent up energy to work out after days of competition sounds like a measure they’d take.

Seems like a better way to avoid COVID spread would be to not have these games?

Conversely, if these beds had been made as a sort of D.A.R.E program-level of abstinence, they’d have to be a lot less sturdy. Not only can the beds hold up to 441 pounds, but you can literally jump up and down on them.

“Anti-sex” beds at the Olympics pic.twitter.com/2jnFm6mKcB

You don’t need to have sex in a bed.

So, in conclusion, the beds aren’t here to prevent any hanky and/or panky, but we at least got some good tweets out of the whole ordeal … followed by an overwhelming sense of “we REALLY should delay these games, huh?”

I thought the whole point of investing that much effort into becoming a world-class athlete was for a ticket to the quadrennial Olympic village fuckfest.

UPDATE: The Olympics have responded to our antics:

Thanks for debunking the myth.😂You heard it first from @TeamIreland gymnast @McClenaghanRhys – the sustainable cardboard beds are sturdy! #Tokyo2020 https://t.co/lsXbQokGVE