Nothing Personal: Ants Execute Their Own To Prevent Damaging Population Booms 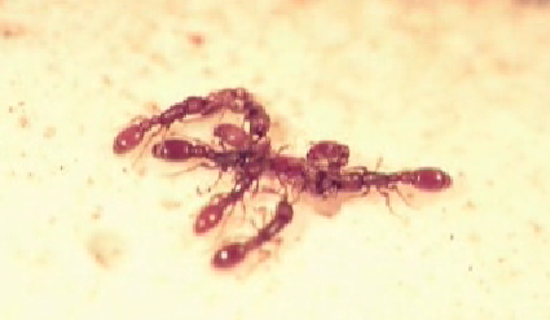 Around many ant colonies, laying eggs is a one-woman-show, the duty of the queen ant. It’s a facet so ingrained in ants that a number of species have been known to drag females who start laying eggs out of the colony, biting and stinging them to death, a behavior that has been seen in the past as a move to eliminate competition to the queen. According to new research published this week in the journal Current Biology, though, the executions have nothing to do with competition among ants and everything to do with the health of the colony as a whole, suggesting the execution may be analogous to a cellular immune response in other animals.

To determine whether the executions were the result of competition from other ants or just a way of pruning reproductive ants to keep populations down, researchers studied Cerapachys biroi, a species of ant that has no queen because all members of a colony are genetically identical. Since any ant in the colony can lay eggs, and all of the eggs will be genetically the same,  researchers theorized, there should be no competition between ants over breeding rights — one egg is literally exactly as good as any other in a C. biroi. So why do they sometimes violently attack and kill their own just for attempting to breed?

The answer, at least in this species, seems to be that it’s a means of preventing populations from swelling to larger numbers than the colony can provide for. Since an overabundance of new ants could make it hard to make room for and feed the colony, sometimes, ants who are laying eggs at inopportune times need to be eliminated, which their siblings take care of with ruthless efficiency. The most common victims — or offenders, depending on how generous you’re feeling — tend to be young female ants who have just reached their reproductive age, says lead author Daniel Kronauer:

More work needs to be done to see if that conclusion holds true among other more typical ant species, but it suggests that this could be another argument for viewing colony insects like ants and bees as so-called “super-organisms,” collections of animals that, taken together, represent a creature wholly different than the sum of its parts.