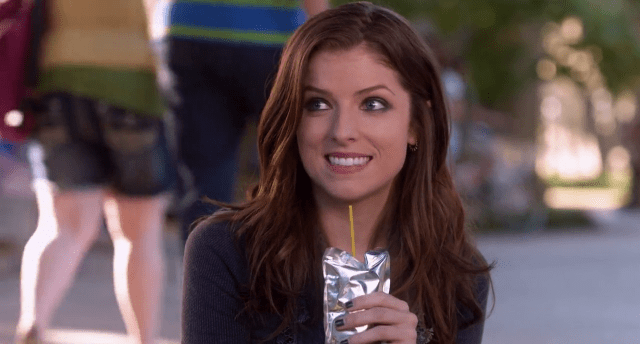 I was varying degrees of disappointed and conflicted by Pitch Perfect 2 (look for our full review tomorrow), but regardless of the movie’s many problematic elements, I still love that a comedy franchise about talented ladies getting shit done has found such a dedicated fandom… one that Anna Kendrick is about to make very happy.

When asked by Collider how she feels about the fans that want to see her character Beca couple up with Brittany Snow’s Chloe, Kendrick replied:

I love it! I couldn’t be more excited about it. In the first movie when we were doing the scenes I was like, ‘This is entering sketchy town and I love it, that’s where I live, that’s my home, is in sketchy town.’ Then we just kind of leaned into it and in the second one—I don’t know, it’s a weird combination in the second one where there’s moments where you’re like, ‘Oh, come on! That’s a perfect opportunity for a BeChloe moment’ and then there’s stuff where like, ‘Oh, that’s gonna blow those chicks’ minds’ Because some chicks are really into it and I’m like, ‘Dope! I love it!’ the fanfiction and all of it.

[…] I’m not gonna lie to you, I tried to read one fanfiction because I was like, ‘I have to know’ and I was… maybe I chose the wrong fanfiction to read, but it was so slow. I was expecting it to be like, ‘Oh my God! I can’t believe they’re writing this crazy shit about me and Brittany [Snow]’ but there was a lot of exposition and I was like, ‘This isn’t a [Charles] Dickens novel’ so I gave up on it after that.

The actress, who has spoken up in recent interviews about sexist hiring practices in Hollywood and the difficulty of financing lady-led comedies, also talked about how desperate she was as a child for positive representation [trigger warning for mention of rape]:

Bad Girls is terrible, but I loved it, I watched it over and over again. And by the way it’s super inappropriate and has rape in it. But it’s women and they’re riding horses and they’re shooting guns and saving each other from stuff; it’s amazing. I’d just never seen that represented before, certainly not in a western. Watching it again recently made me realize it didn’t matter to me that this was terrible and weird and had some material that I was too young for, it was just what I wanted to see. I’m glad that girls are watching Pitch Perfect and not a western with rape scenes in it.

And the Boss Pitch wants to make sure that young-female-butt-kickers become increasingly more frequent in film; when asked by Collider what actor between the ages of 16-21 she thinks should play Spider-Man, Kendrick replied “How old is Quvenzhané Wallis?”