This iPad Map Guides You Through Ankh-Morpork, Where Else Do You Want to Go? 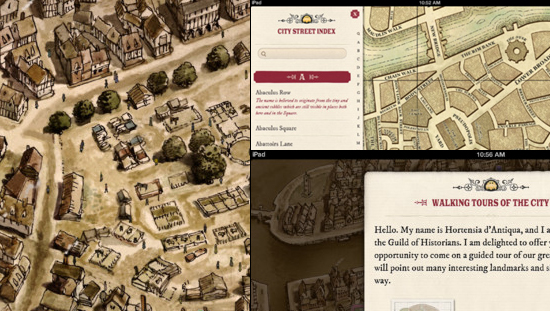 There’s an app for everything, right? Well, not yet, but maybe soon. For example, Random House has created an app for the iPad that lets you explore, in great detail, the entire city of Ankh-Morpork, the famous fictional metropolis of the Discworld series. So what’s the deal? And what does it mean?

Well, Discworld: The Ankh-Morpork is a searchable, animated map that lets you zoom in, watch, and listen as its citizens go about their business. Riddled with famous characters from Terry Pratchett’s books and fleshed out in enormous detail, you can take a walking tour to the sites you’ve only read about and even look down streets you haven’t. Available in the iTunes store for $13.99, this app begs another question. No, it begs many: Where else would you be willing to see — and pay — to explore? And who would be doing the work?

With this app setting a precedent for digitizing fiction in this with manner, and with Minecraft fans already rendering vast swaths of Westeros, where else might technology take us? Might other popular fantasy or sci-fi series follow suit? Would you pay to explore Minas Tirith or Barad-dûr on your smart phone or tablet of choice? I certainly would! Of course, Terry Pratchett’s still alive and on hand for this level of detail. He can say whether any given version of his world is the “right” one. J.R.R. Tolkien could not (probably would not), nor does his extensive literary works cover the level of detail needed to flesh out an entire city, much less the whole of Middle-earth.

But that really hasn’t stopped us before. In The Lord of the Rings Online, I’ve already explored the full topography of Rivendell, fought my way through all the tunnels of Goblin-Town, and wandered the mallorns and tree-lofts of Lothlórien. But then, that was just Turbine’s version of Middle-earth. There’s also New Line Cinema’s, courtesy of Peter Jackson and his army of movie-makers, bits of pieces of which have also been rendered in various video games since. Where does an app stop short of being of just being a different sort of video game? Or is it really just a detailed map and nothing more?

What would you like to have an app for? Caemlyn? Cair Paravel? Tarbean? Waterdeep? Or is it enough to envision these places for yourself? Tough call.

(via Tor.com, image courtesy of iTunes)