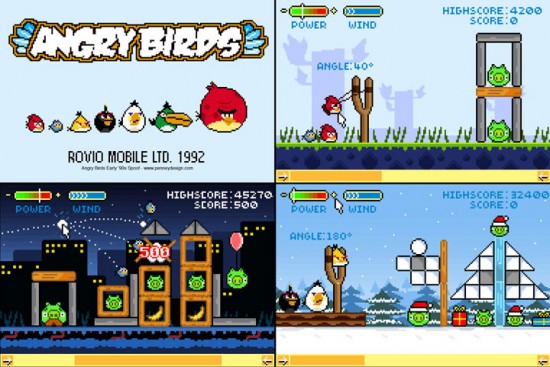 We’ve previously written about video game demakes, reimaginings of today’s games in 8 or 16 bits that frequently look like even more fun than the newer, sleeker games. (Tell me that this Gradius-like 16-bit Bayonetta mock-up doesn’t look fantastic.)

Rovio’s Angry Birds, to which I have recently become hopelessly addicted, is a nice-looking game, but being a mobile game it’s primarily known for its gameplay rather than its graphics. But Penny Design’s Robert Penney still saw demake potential there: Noting its affinity with such ’90s puzzle staples as Worms and Lemmings, he treated it to “a retro reimaging with blocky pixels” in the mock-ups above. Please make this a real thing, Rovio!