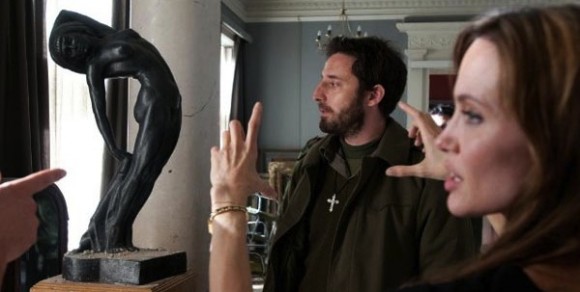 We at The Mary Sue generally don’t cover stories about gossip and celebrities. No, we cover the stories, the storytellers, the artists, the creative minds of our generation and those of generations past. But this rumor about Angelina Jolie beng considered to direct a movie adaptation of the glorious Twilight fanfic smutfest Fifty Shades of Grey is hilarious. I mean, we know who Angelina Jolie is, right? The lady who made her directorial debut in a movie about the Bosnian war that was filmed in Bosnian and Serbo-Croatian, who generally spends her personal time in treehouses around the globe bringing the world’s attention to all the disasters we’ve been ignoring … yeah, that lady is probably not going to direct a BDSM movie. But let’s make fun of the people who think she might!

The Hollywood Reporter says (somewhat preciously, and I don’t mean to condescend, but hold on for just a second) that the idea of Jolie directing a film adaptation of E. L. James‘s erotic novel “would make some sense” because of the whole “strong female voice” thing. Now, while I haven’t read Fifty Shades of Grey, this it what I gather from it: this was originally a series of fanfic pieces based on the Twilight franchise (nothing wrong with that, no judgement from a girl who wrote a full-length Scream screenplay in high school). Because of the, ahem, adult content, some people complained that the author’s stories should probably distance itself from a young adult series, so she changed the characters names and published them on her own site. And then, she turned the stories into incredibly successful books.

Again, nothing wrong with that.

But Angelina Jolie, while she could totally have opened up Fifty Shades of Grey in a bookstore and been tickled by it (probably thinking, “Oh, those were the days”), is probably not putting this “crowd-pleaser” on her to-do list. With all due respect (to Fifty Shades), Jolie is in a different league than Fifty Shades. While Fifty Shades might even be not that bad as a movie, Jolie is in Oscar territory most of the time (save for The Tourist), and it’s doubtful that even if she was feeling frisky one day, she’d lend her efforts to something like this book. So … yeah. No. Not Angelina Jolie for this one.

I would, however, like to see a woman take on Fifty Shades of Grey, for sure. And you know who would be an even more hilarious choice than Jolie? Nancy Meyers. I think she’d be wonderful.