It's the ultimate "Surprise, bitch! Bet you thought you'd seen the last of me." 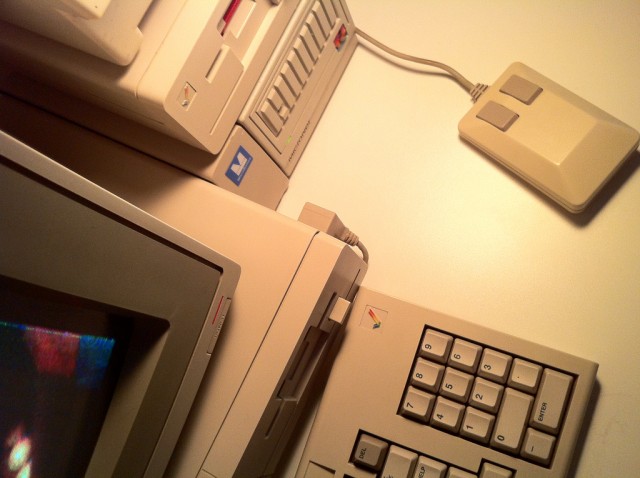 Ladies and Gentlemen, we now officially live in the future. How do I know this? Because we’re discovering lost works from celebrated art visionaries not scribbled on napkins or painted over on old canvasses, but on floppy disks. Now it’s only a matter of time before we get those jetpacks we were promised.

Warhol used the Amiga 1000 in his work as part of Commodore Amiga product launch press conference in 1985, during which he captured and retouch a digital image of punk singer Debbie Harry. While the image of Harry has been on display at the Andry Warhol Museum for decades, all other computer art that he created from that time period has remained unaccounted for until now.

Carnegie Mellon University’s Computer Club, as well as a team of archivists, artists, and curators banded together to retrieve this work after artist Cory Arcangel first saw a video of the live Amiga event on Youtube. This footage, in fact:

The team was able to extract the data from the 41 floppy disks currently sitting in the Andy Warhol Museum’s archives, and the fruits of their labor will be featured in a documentary called  Trapped: Andy Warhol’s Amiga Experiments, which opens on May 10th at the Carnegie Museum of Art in Pittsburgh.

The second film in a five-part series from the  Hillman Photography Initiative, Trapped will explore the technical aspects of how the retrieval team uncovered these almost-dead digital images. It’ll also be available online through the Hillman website on May 12th for those of us who can’t make it out to Pittsburgh to see it.

(via Engadget, image via Blake Patterson)