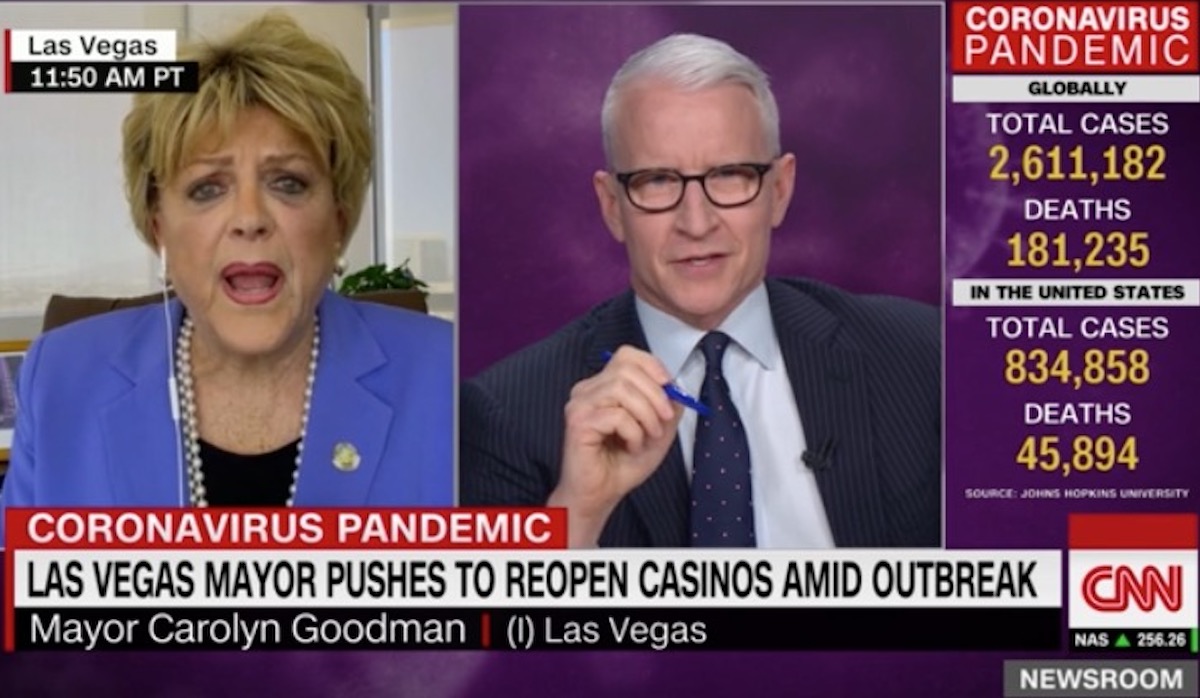 Las Vegas Mayor Carolyn Goodman is pushing to reopen the city’s casinos, hotels, and other businesses, which is, on the one hand, totally understandable. Vegas is a town built on tourism and without these businesses, their economy must be devastated. On the other hand, her defense of her position is mind-bogglingly ignorant.

Goodman spoke to CNN’s Anderson Cooper Wednesday and this woman has absolutely no idea what she’s talking about. The whole interview is bananas, but let’s try to break down some of the wildest parts.

It took Cooper quite some time to even get Goodman to say what it was she wanted to reopen. Is it the casinos? The hotels? The stadiums? The theaters? What is it that will be the biggest boon to the city’s economy? Goodman says it’s not just the casinos that brings people to Vegas, it’s “love.”

She says she wants everything open but when Anderson presses her on what that means, she says he’s being “very specific.” But “no,” she says, “the reality is I want us open in the city of Las Vegas so our people can go back to work.”

Those words mean nothing!

How can she justify reopening the city as a whole? Well, she says “we’ve had viruses for years that have been here” and they’ve never shut things down. She legitimately doesn’t see a difference between this particular global pandemic and other past viruses.

She also claimed that in Las Vegas, “everything’s clean” so … right off the bat, I don’t think we’re talking about the same Vegas here.

Cooper tried to make sure he was understanding what Goodman wanted to see happen and to know if she was really taking the risks seriously.

“You’re encouraging hundreds of thousands of people coming there, in casinos, smoking, drinking, touching slot machines, breathing circulated air, and then returning home to states around America and countries around the world,” he said. “Doesn’t that sound like a virus petri dish? How is that safe?”

Her response: “No, what it sounds like is you’re being an alarmist.”

Las Vegas Mayor: It sounds like you’re being an alarmist! pic.twitter.com/meAlEMpntl

Goodman says she knows what she’s talking about, okay? She’s “lived a long life.” She grew up in Manhattan and has ridden the subway and been “crammed into elevators” and she’s doing fine! So clearly, you know, science!

For those who don’t get to watch the @andersoncooper interview with Las Vegas Mayor, Carolyn Goodman. It’s 15 minutes long. This describes the entire thing. pic.twitter.com/LU28pC8lOb

Cooper seems baffled that she doesn’t believe in social distancing, but she says she absolutely does. Okay, so how do you social distance in a casino? “That’s up to them to figure out,” Goodman says!

Goodman treats the entire interview like it’s some kind of “gotcha” set-up, like Cooper’s trying to trick her into saying something that will make her look bad. Except she clearly doesn’t need any help in that regard and by working so hard to avoid his questions, she stumbles into some truly weird territory.

—She says she thinks she had the virus back in January–weeks before the first known cases in the U.S.

—She also says, though, that Las Vegas–like the entire city!–”didn’t have the disease” when the governor issued a stay-at-home order. So I guess she was the only one?

—She talked about Typhoid Mary riding the bus and cooking (and also being quarantined) as some sort of proof that asymptomatic carriers (of this substantially more infectious virus) aren’t to be feared. I think? I think that was her point.

—When asked about increased testing, she offers this bizarro response: “I know over the years, going back to the 1950s, with the atomic bomb, don’t worry about more testing in Nevada. You’ll all be fine. Take a shower.”

—She offered up an entire city to be the “placebo” in coronavirus testing.

“We would love to be that placebo!”
“The group that gets the placebo btw, usually gets the short end of the stick…”
Jesus, they just ended the episode with this. pic.twitter.com/Pq3qwNYMQk

And then finally, when Cooper brought up a study from Chinese researchers about how the virus spreads in a restaurant, she told him, “This isn’t China, this is Las Vegas Nevada,” as if the virus spreads differently there. Because you can’t have an interview rooted in this level of ignorance without dipping into some heavy racism.

At least Cooper calls her out for being “ignorant.”

“Wow, that’s really ignorant.”@AndersonCooper clashes with Las Vegas Mayor Goodman after she justified her wish to quickly reopen casinos saying, “this isn’t China, this is Las Vegas,” after he showed her a graphic of how coronavirus could spread in a restaurant in China. pic.twitter.com/w3QscYmiIH