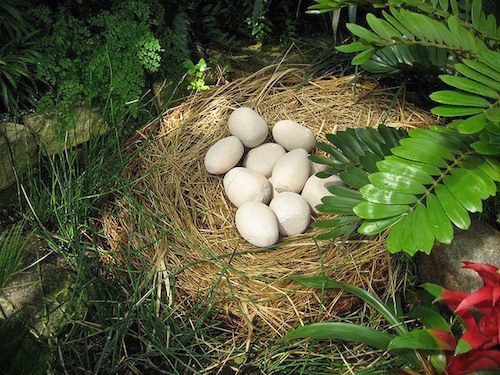 The extremely exclusive list of prehistoric creatures that are still alive and kicking just got a little bigger. Based on creatures like the horseshoe crab and the crocodile, known for evolving to their modern forms millions of year ago, you might expect the new addition to be reptilian or some deep-sea creature. You’d probably never even think about the majestic flamingo, which scientists believe may have been around over 18 million years ago.

Scientists believe that a fossilized bird nest discovered in Spain belonged to a species incredibly similar to the modern flamingo. The connection between the two isn’t necessarily apparent just by looking at the eggs: Researchers only discovered the connection after finding microscopic details that connect the eggs directly to the ancient bird species.

While there are many similarities, the nest isn’t exactly identical to a modern-day Flamingo nest. Flamingos, as we know them, make a secure hill around a single flamingo egg. The nest found here, was made of sticks, and held multiple eggs. Researchers claim the nest is reminiscent of the modern Grebe, a duck-like diving bird, which constructs and lays eggs in similar manner. The researchers suggest that the nest may be a sign the grebes and flamingos evolved from the same species.