21 Weird Names For Groups of Animals 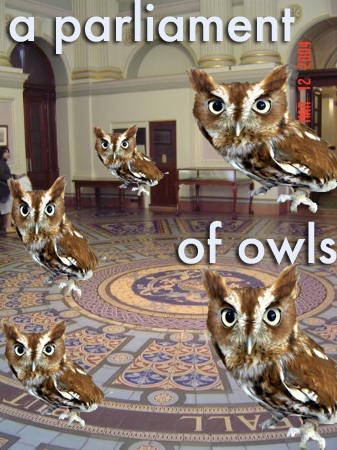 When it comes to collective nouns regarding groups of animals, you know the standard ones. Wolves run in a pack, fish in a school, geese in a flock, cows in a herd, etc. In fact, you probably know some of the weirder ones too, like whales in a pod or locusts in a plague. It doesn’t stop there though, as there are tons of really, really bizarre collective nouns for animals that it’s hard to believe anyone actually uses. Whether they’re used or not, they’re certainly good for a laugh and maybe a really good pun somewhere down the line. We’ve collected a bunch of the best for your pleasure and enlightenment.

Some of them may sound ridiculous, but they’re all from the Northern Prairie Wildlife Research Center, as reliable of a resource as we could find on the subject. Check out the rest of their list here.

(inspired by this reddit thread, image via The Collective Nouns Tumblr)