Shipwreck Yields Some Of History's First Pills | The Mary Sue 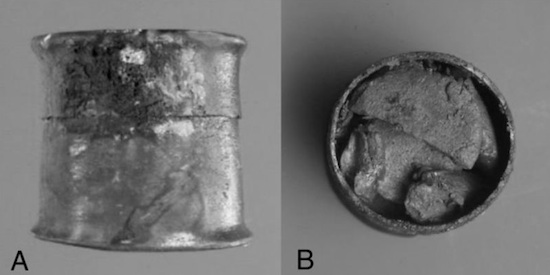 Researchers sifting through the artifacts of a 2,000-year-old shipwreck have uncovered an unexpected treasure —  one not of gold or silver, but simple, unassuming zinc. A tin full of zinc tablets contained within the wreck may be one of the earliest examples of a modern, prepared medicinal compound, say researchers in a story published this week in the journal Proceedings of the National Academy of Sciences.

Researchers believe the tablets, composed mostly of zinc and other natural ingredients like animal fat and pine resin, would have been used in an early form of eye or skin medication. The powdery tablets could have been crushed into water to form medicinal solution akin to an eyewash. It also could have been used to make a treatment for skin irritation similar to calamine lotion, in which zinc is till the primary ingredient. The ingredients match nicely with some of the writings of Roman naturalist Pliny the Elder, who described similar compounds in some of his writings and prescribed them for the treatment of eye and skin ailments.

The medicines were found in a tin called a pyxis that also contained small vials and a cup that would have been used for bloodletting, leading researchers to believe that it once belonged to a physician. The ancient doctor’s little black satchel was reclaimed from the wreckage known as the Relitto del Pozzino, which is thought to have met its sad fate around 140 BCE, when it sank to a watery grave off the coast of what is now Tuscany.