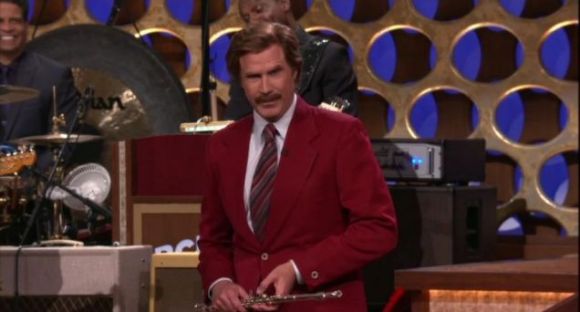 By the hammer of Thor, it’s officially official: Anchorman is coming back. The announcement was made by Will Ferrell, in character as the titular anchorman Ron Burgundy, on Conan last night. What a glorious day! View the announcement after the jump, and let’s rejoice as a nation, here “in the Americas” and the UK, “including England.”

After ripping apart Conan O’Brien for a little while — saying he resembled “skeleton” wearing a “bright big fright wig” — Burgundy confirmed news that had been speculated on for a while now:

Since the success of Anchorman: The Legend of Ron Burgundy back in 2004, which was Ferrell’s first real box office success since leaving Saturday Night Live, several people wondered whether or not the Action 4 news team — played by David Koechner, Paul Rudd, Steve Carell, and Christina Applegate — would come back for more. After all, the DVD was released with a whole other movie (albeit a choppy one) made up of unused footage.

No word yet on who will return from the cast, but it will be interesting to see where the future has taken Burgundy & Co. since we last saw them in the mahogany-scented 1970s. Will the rest of the news team have come around to a women in the news room? Does Champ still have an unrequited crush on Ron? Will we get to see the beginning of Brick’s political career? Holy crap, you guys — there are so many questions.

Who is definitely returning is the production team: Judd Apatow‘s company will produce, along with Ferrell and Adam McKay, who directed and co-wrote the first movie (with Ferrell). He will also direct and write the sequel.