You should really watch this one, because there's probably not going to be a Game 11. 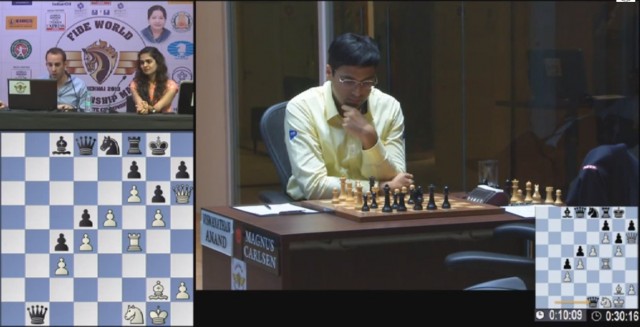 Game 10 of the FIDE World Championship kicks off Friday morning, but Game 9 all but assured a victory for challenger Magnus Carlsen. If Vishy Anand is going to hold on to his title, he will have to sweep the three remaining games, and win a tiebreaker round.

[Update – 4:21AM EST] Here are the live stream with commentary and the interactive chessboard for Game 10. Everyone wish Anand good luck today. He’s going to need it.

[Update – 10:16AM EST] The game has ended, but you can play around with the interactive board and watch the replay below.

Carlsen doesn’t even have to win Game 10. A draw will put him at the minimum required 6.5 points to win the best of 12 series, so it’s a major uphill battle for Anand. In the post-game press conference after losing Game 9 this morning, Anand said he’ll still try to win, but it’s looking like he’ll be handing over his title to Carlsen tomorrow. Watch the video of Game 9 below while you wait. If you’re impatient, you can skip ahead to the 3:27:00 mark to see the fatal mistake Anand made that cost him the game, and likely his title. If you don’t have 3 1/2 hours to kill right now watching chess, you can click through the moves on the interactive chessboard below. It’s move 28. Nf1, the one in bright red in the notation that’s the killer for Vishy.

The live feed and interactive board for Game 10 will be made available shortly before the game begins at 4:30AM ET, and we’ll update this post with them when that happens. The official feed will have expert commentary by chess masters, and our own Senior Editor Glen Tickle will sleepily be making jokes on Twitter, but we expect the result of tomorrow’s game is a foregone conclusion.

“Oh, poor Vishy!” is the chess equivalent of “Down goes Frasier!” #anandcarlsen #fwcm2013