Amy Schumer, Lena Dunham and the Trouble with White Feminism

Houston, we have a problem.

Like everyone, I had heard about Lena Dunham’s “brush” with Odell Beckham Jr. at this year’s Met Gala and rolled my eyes when she told Amy Schumer she felt “ignored” because he didn’t talk to her. “I was sitting next to Odell Beckham Jr., and it was so amazing because it was like he looked at me and he determined I was not the shape of a woman by his standards,” she said during her completely fictionalized account. “He was like, ‘That’s a marshmallow. That’s a child. That’s a dog.’ It wasn’t mean — he just seemed confused.”

After receiving some backlash on social media, Dunham “clarified” her statements according to Entertainment Weekly. “My story about him was clearly (to me) about my own insecurities as an average-bodied woman at a table of supermodels & athletes,” she wrote on Twitter. “It’s not an assumption about who he is or an expectation of sexual attention. It’s my sense of humor, which has kept me alive for 30 years. Glad the outrage machine roars on though, right @amyschumer?”

Yeah, her imaginary rejection painting Odell as some superficial athlete who “ignored” her is no big deal. Just like her follow up, in which she planned to sexually harass Michael B. Jordan because she’s definitely not racist. “I’ll try and dance myself onto @michaelb4jordan if I have the chance, even when I’m a married grandma. I’m a red blooded str8 woman!” she added.

What better way to deflect racism than by sexualizing a black male body and acting as though you automatically have permission to use it for your amusement. It’s not like slave owners did such a thing a few hundred years ago, or like black men were exploited as sexually aggressive objects in films like Mandingo or anything.

What bothers me the most about this sort of thing is that both Lena Dunham and Amy Schumer have painted themselves as feminists, have even been lauded for it, but have gotten away with racist remarks and sexualizing black bodies because this is what White Feminism looks like. Those who operate under ‘White Feminism’ work under the notion that they’re speaking up for equality but then, when it comes to the issues regarding people of color, they’re either ignorant, silent or trying to silence the voices of those who would call them out on their racism. And even when they admit their wrongdoings, everything is okay because they apologized and can continue to make similarly offensive comments.

It’s like when people laughed off Schumer’s “Milk Milk Lemonade” music video, a parody which featured women of color twerking, or her jokes about black men breeding and Latina women being “crazy” because it’s “funny.” We should all lighten up, right? If that were the case, then she wouldn’t have deleted this tweet, per the Atlanta Black Star, that alleged black men were more sexually aggressive. 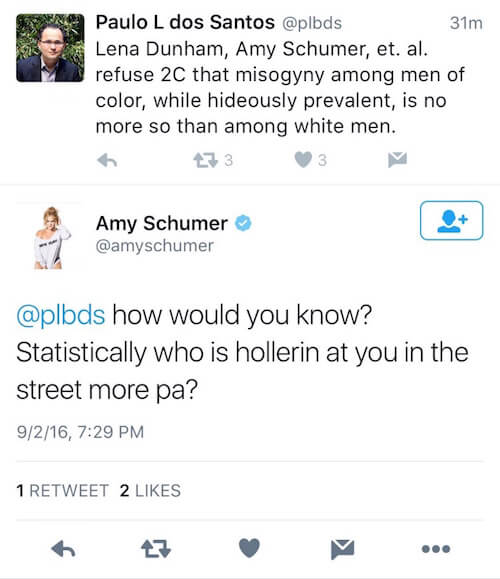 But the truth is, she’ll still have fans and she won’t even get so much as a slap on the wrist because there are many who will defend her under the guise that she’s a feminist. Fun fact: feminism and racism aren’t mutually exclusive. See Elizabeth Cady Stanton, a leader of the American suffrage movement, who was offended that “degraded black men” were allowed to vote over white women, and requested that black suffragettes marched at the back of their parades.

Still, I wish they understood the difference between joking about black people being lazy or sexually aggressive and a black comedian claiming white people love mayonnaise, because the former has real life implications. How many people of color have been maimed, killed or sexually assaulted because of said assumptions? And how many white people have been harmed because someone said their chicken was flavorless?

For centuries, women of color have dealt with additional, separate obstacles and we really don’t need more white people speaking over us. So when Schumer and Dunham laugh off the offensive things they said, offer up an empty apology, or try to erase them via deleted tweets, they’re just sweeping their (intentional or not) racism under the rug until it rears its ugly head again. But then again, that’s exactly how white feminism works and thanks to even more women like Taylor Swift and Amy Poehler, who use women of color as props yet remain silent on our issues, it ain’t going away any time soon.