Amy and Rory in a Raphael Soyer Painting | The Mary Sue

Cute Coincidence of the Day: Real Life Painting From the Past Looks a Lot Like Amy and Rory 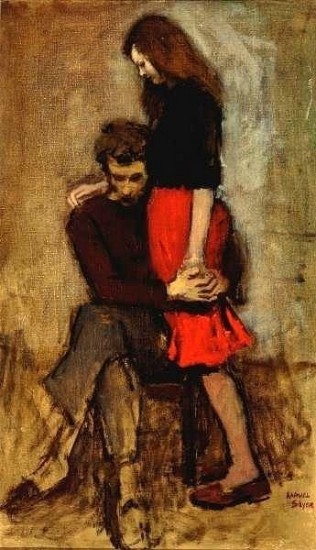 Above the cut, all I’m going to say is that this is a painting from the career of Raphael Soyer, of an auburn-haired woman and her lanky, big-haired male companion. Doesn’t it kind of look like Amy and Rory?

Behind the jump, I’m going to go into some of the weird coincidences between the life of Raphael Soyer, his usual choice of subject matter, and the events of The Angels Take Manhattan. So, you know, spoilers.

As brought to our attention by The Tor Blog, Raphael Soyer was born in Russia in 1899, forced to leave their country in 1912, his family emigrated to America and settled in… the Bronx. His career as a painter began in earnest in the 1930s, with his work, which depicted daily life in New York City streets and subways in the realist style, being shown in large exhibitions.

We know that Amy and Rory got zapped back to the 1930s by a Weeping Angel in a graveyard in their final episode. Since their gravestone was in that same graveyard, and their son spoke with an American accent (in this unfilmed scene from “The Power of Three”), we can infer that Amy and Rory probably spent their lives right in New York City. And why not? For two people who love adventures, it’s a pretty good place to be. And if Amy and Rory lived in NYC, they would have had plenty of opportunity to know the painter of this piece, Raphael Soyer.

Considering some of the events of Amy’s time with the Doctor, it’s not too far fetched to say that she would have cultivated a large group of peers and enjoyed the company of artists.

For even more conincidences, as well as a theory on why the Ponds look so depressed up there, see the whole article at Tor. Your feels will thank you.