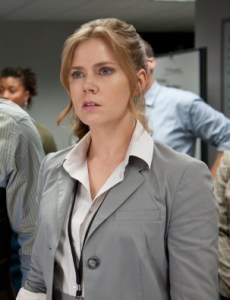 “Am I interested [in a Lois-Superman-Wonder Woman love triangle]? I don’t know. I mean, we’ll see. I hope that I can be involved with a woman on screen where we’re not in a love triangle. That would be fun. Maybe where we team up together and we work as teammates instead of adversaries.”—A few days ago Amy Adams was taken a bit aback by a question about Wonder Woman, since she didn’t even know the superheroine would be in Man of Steel 2 until the interviewer asked her about it. But turn the subject to a Wonder Woman-Lois-Superman love triangle, and boy, she knows what she wants to say. Props to Adams, because if I were in her shoes I would’ve given the same negative answer, but there probably would have have been some cursing. Clearly she’s classier than I.