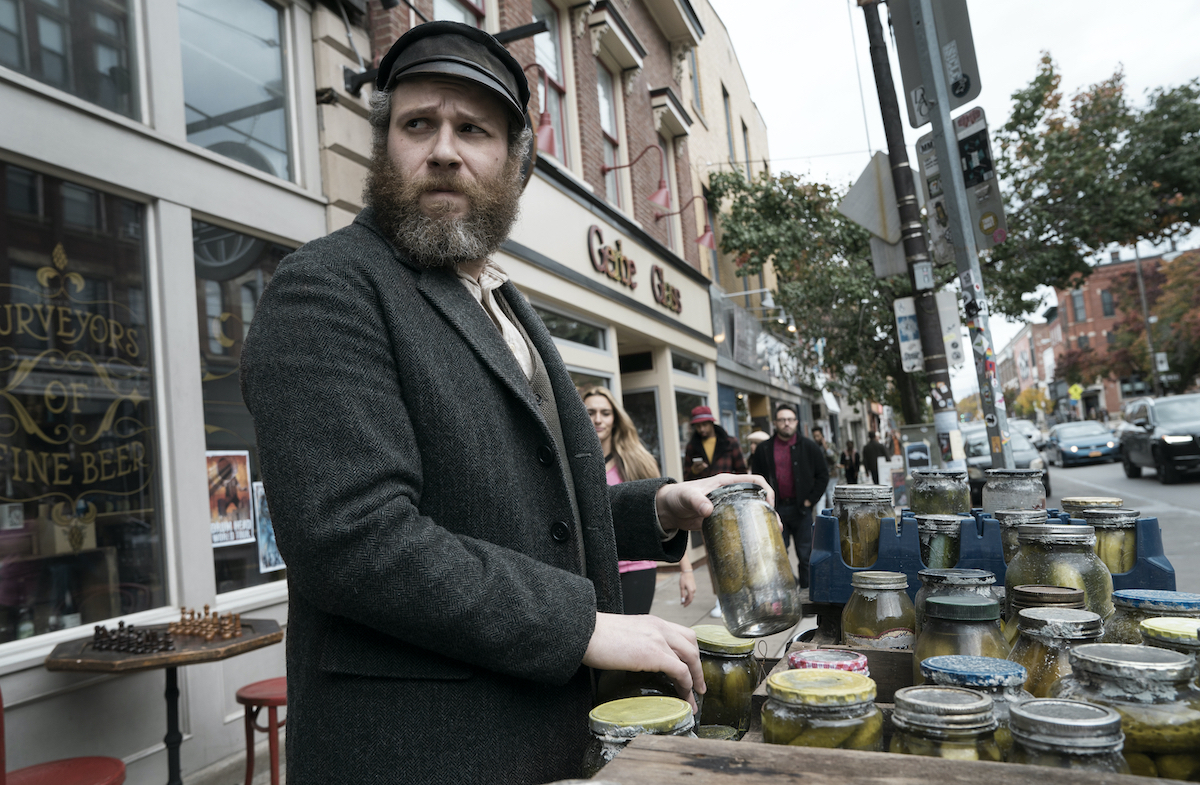 The New Yorker published Simon Rich’s four-part novella Sell Out in 2013, although Rich had been working on the idea for years before that. According to interviews with actor Seth Rogen, he and Rich had been planning that entire time to adapt the story into a film. The two had reportedly been discussing the project since 2007, and Rogen and his frequent partner Evan Goldberg bought the rights to the story just a few months after it was published. The adaptation, titled An American Pickle, finally debuted on HBO Max last week.

Both versions tell the story of Herschel, a Jewish immigrant living in Brooklyn in the early 20th Century. Thanks to an accident in the pickle factory where he works killing rats, Herschel ends up preserved in brine for 100 years. When he’s discovered, his only living family is his great-great-grandson Ben (called Simon in the short story, which is very loosely inspired by Rich’s own family–minus the magical realism, I assume), who is exactly the same age as Herschel, meaning that in the film adaptation, Rogen plays both roles.

Both the novella and the film are total delights. The story is smart and witty and while it’s definitely a comedy, it’s also deep and more than a little dark. It offers commentary on issues of family, faith, and capitalism. It also hinges on the very real historical violence between Cossacks and European Jews.

In the era of endless remakes and sequels, where we’re all seemingly constantly complaining about the lack of original films, this movie is a bit of a balm.

More than the name changes, the film and the original source material have quite a few differences. Perhaps the biggest is the elimination of an entire character: Claire, Simon’s non-Jewish girlfriend, who is arguably the short story’s second lead after Herschel, a more prominent character than even Simon himself. Claire doesn’t exist in the film version and while I feel disappointed by the decision, which renders the film heavily male (Succession’s Sarah Snook plays Herschel’s wife, Sarah, in flashbacks that are unique to the film but limited mostly to its early scenes), I agree that it was the right choice for the movie.

In the original story, Simon is not exactly relatable as a character. He’s the stereotypical self-absorbed, entitled, whiny millennial, made even worse that we only see him through Herschel’s eyes as his character is the narrator. He’s less a foil for Herschel than a pseudo-villain, with Claire bridging the gap between the displaced time-traveler and modern life.

It makes sense that the film would want to endear us to Ben, if for no other reason than because Rogen is playing him. Plus, it definitely streamlines the film, which comes in at a perfect 88 minutes. But there are other benefits, too.

Faith plays a large role in both versions, as it’s a major guiding force of Herschel’s life, while Ben/Simon are far from practicing. Simon is more indifferent, while Ben is actively averse. Without getting into spoilers, faith is at the foundation of the places the pair’s relationship ends up going, though they take very different routes getting there. While I really love the turns the novella took–dipping into that criticism of capitalism I mentioned earlier as well as tackling the travesty that is our immigration system–the film made some big changes that center the relationship between these two men and offer both characters fuller arcs.

Interestingly, it’s not clear if cutting Claire was always the plan. Back in 2018, PEN15 co-creator and star Maya Erskine was added to the cast, but she’s not in the final film. (The only two substantial female cast members that appear in the film–Snook and Molly Evensen–were also announced at the same time so it doesn’t appear she was replaced, just cut.) It seems likely that she was set to play Claire and I’d love to know how far they got into the process before they cut the character (if that is in fact what happened). Are there deleted scenes we might see some day, or did the character not make it past pre-production?

As a big fan of the short story, I’ve been looking forward to the adaptation for such a long time and I really am delighted with how it turned out. I’m just very curious to know more about the process involving Claire and while I understand why she was cut, I still miss her role in this story.