American Gods‘ Technical Boy Has Been Updated As a Smug, Hipster Tech Bro Who’s All “Bluster and Anger” 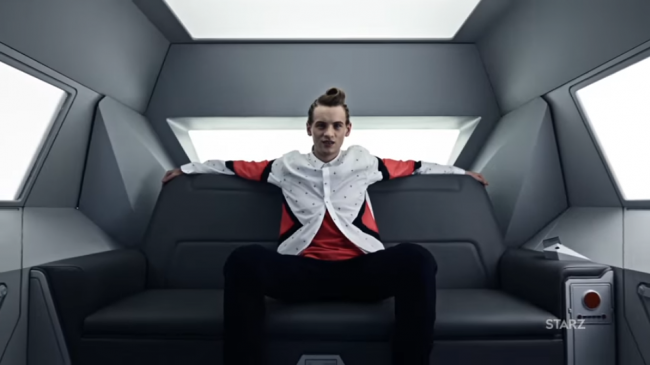 Neil Gaiman’s Hugo and Nebula-winning novel, American Gods, was first published in 2001: the year of the massive AOL-Time Warner merger, when the internet was still very much evolving and the dot-com bubble was just beginning to burst. Facebook and Twitter hadn’t been founded yet; neither had Reddit or 4Chan.

So when Gaiman wrote the character of Technical Boy, the New God of the internet, he was personifying a very different internet from the one we have today. In the novel, Technical Boy is a “fat kid in a limo” who suffers from acne and wears a black trenchcoat. He speaks to a very specific image of the online nerd–and one that feels more like a Gamergate parody than a representation of the slick, Silicon Valley startup culture that holds real tech-industry power.

So for the 2017 TV adaptation, Gaiman and the show’s executive producers–Bryan Fuller and Michael Green–had to update the character for a new decade. Bruce Langley, who plays Technical Boy, spoke to SyfyWire about the changes.

“Neil and the EPs have done a fantastic job with rewrites in the adaptation,” said Langley, “because he’s a reflection of our relationship to technology, and us as a society, and our relationship – or lack thereof – to each other…We are slowly but surely moving further and further away from the normal, deep human connection and storytelling that made us who we are as a species. People are more or less dopamine addicts. It’s the notification, and the constant hit of Instagram.”

Technical Boy incorporates both the incredible power and isolation of the internet. “He literally thinks faster than any human being, which is a hell of a lot of fun to play with,” said Langley. However, that ability also “makes him isolated…Everything is a metric for him. Even people on his own team, so to speak, don’t really seem to like him very much.”

Physically, he is also very different from his novel persona. For one, he’s a hipster fashion chameleon whose look “is constantly in flux.” Though we’ve only seen him in one outfit in the trailer, Langley said he “practically lived” in costume and makeup, trying out tons of new and creative looks. “His clothes are incredibly brazen,” said Langley. “Everything he wears pretty much says to anyone else in the room, ‘Fuck you.’ If you are wondering how he feels, it’s pretty much an extended middle finger.”

The only constant in his wardrobe was an irritating vape pen. “I don’t know whether that’s intentional,” said Langley. “I made a decision for the character about why it was there. I thought it was interesting that this literal invasion into someone else’s nostrils and personal space was a relative constant.”

Psychologically, Technical Boy is also “an incredibly young [god] who has only known consistent worship. He doesn’t know anything else.” (Hello there, metaphor for privileged startup founders.)

“With the hubris and arrogance that goes along with the power he’s always known, he doesn’t really consider [the Old Gods] to be too much of a threat,” said Langley. “But much like when there is a bit of source code that doesn’t add up, [and] a computer can’t process it so it keeps coming back to it, so they’re infuriating to him. These Old gods have the audacity to still exist and they don’t compute. These people are refusing to update, so they are code that he has to get rid of.”

Speaking about Technical Boy’s conflict with the Old Gods, Langley said, “I think for him, he literally struggles to understand why they are still alive…There is nothing in his life that isn’t now, now, now! Then there’s this concept of a gaggle of ancient beings clinging onto these old traditions, trying to establish old beliefs in a world that he has never had a tangible connection with. They are harping on, very eloquently, about the importance of belief, blah, blah, blah. They are beyond irritating to him.”

Asked if Technical Boy is a tragic character, Langley said, “I don’t think he’s aware that he is. But in a word, perhaps. I think he is a worryingly accurate representation of some aspects of our relationship with technology. The whole crux of the series is about people’s beliefs calcifying into the gods. There’s all of this energy going in [technology] and it’s kind of addictive, in the same way that worship can be. It gets a hell of a lot done, but it lacks connection.”

Continued Langley: “I’m not going to be breaking out the violins [for him], but at the same time he’s missing what it is to be fulfilled and that’s pain. He’s a maelstrom of all this bluster and anger.”

After watching the first and second trailers, I was already on board for this adaptation of American Gods, but Langley’s interview has me even more excited that they’ll get things right.

(Via SyfyWire; image via screengrab from Starz trailer)