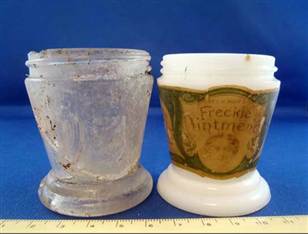 Amelia Earhart‘s disappearance is one of history’s favorite conspiracy theories, but in recent history, there’s actually been a lot of research done along the path she was known to be on, and the discovery of a mid-century castaway camp on the remote island of Nikumaroro that contains American retail items that would have belonged to a woman as well as some that would have belonged to a man. (Earhart was flying with navigator Fred Noonan when she went radio silent.)

So, the general understanding as been that rather than being picked up by aliens or flying through a wormhole, Earhart must have run out of fuel, crash landed in the Pacific, possibly even on Nikumaroro. The most recent evidence to support this theory is what appears to be the recovered fragments of a jar of anti-freckle ointment on Nikumaroro.

“It’s well documented Amelia had freckles and disliked having them,” says Joe Cerniglia, a researcher with The International Group for Historic Aircraft Recovery. Dr.‭ ‬C.‭ ‬H Berry’s Freckle Ointment, the brand that the jar appears to belong to, was, like every other old-timey cosmetic product you’ve ever heard of, 11% mercury. Other evidence of castaways attempting to survive on the island include “part of a man’s shoe,‭ ‬part of a woman’s shoe,‭ ‬a box that had once contained a sextant,‭ ‬remnants of a fire,‭ ‬bird bones and turtle bones‭,” but those artifacts particularly have been lost since they were found in 1940.

Researchers still trying to figure out whether the jar is actually Dr. Berry’s:

“The problem we have in precisely identifying the jar is that all the examples we have found come in opaque white glass. The artifact jar is clear glass,” said Cerniglia.

So far, the researchers have not been able to match the exact size of the artifact jar to a known jar of Dr.‭ ‬Berry’s product.‭

“The reassembled artifact jar does,‭ ‬however,‭ ‬fit nicely in a box in which freckle cream was marketed.‭ ‬The known Dr.‭ ‬Berry jars do not.‭ ‬So we know there was a jar of Dr.‭ ‬Berry’s Freckle Ointment of the same size as the artifact jar,‭ ‬but we don’t know whether it was clear glass,” Gillespie said.

Four of the five shards of the jar were found in one place, with the fifth discovered near the bones of a turtle, suggesting that it may have been used as a tool. Whether Earhart used it or some other castaway, remains as just one of the many arguments to be poured over by The International Group for Historic Aircraft Recovery in an upcoming conference.

(MSNBC via The Frisky.)