Amazon Pulls Yaoi From the Kindle 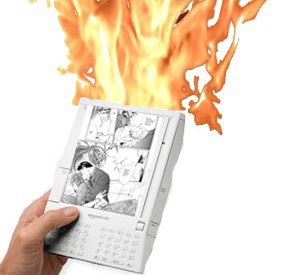 Ove at CBR, long-time manga reporter Brigid Alverson informs us that Amazon is pulling Yaoi titles from its Kindle offerings. (Some NSFW images in link.) Digital Manga Publishing and Animate U.S.A. have had several of their titles pulled from the Kindle store (especially a problem for Animate U.S.A, which only publishes exclusively on the Kindle in the U.S.). And it looks like more could be on the way.

The problem–surprise, surprise–is that not only is Amazon practicing censorship, it’s applying double standards to queer and het erotica.

All the reviews I checked described [censored Yaoi title The Color of Love] as more sweet than sexy, which raises the question: If this story had been about a man and a woman, would it have been removed from the store?

Is it 2009? This stunt seems identical to#amazonfail, in which Amazon removed all search result listings of a random and bizarre assortment of titles considered to have “adult content,” which was predominantly queer-focused but also included 1984 and The Color Purple. While Amazon claimed that the PR disaster was the result of “a glitch,” the firm never actually apologized, and in fact many people pointed out that the “glitch” had been occurring on a routine basis since February of that year, and that certain titles never actually resurfaced on Amazon’s search listings.

You know, I’m just going to bullet point the things that are wrong with this.