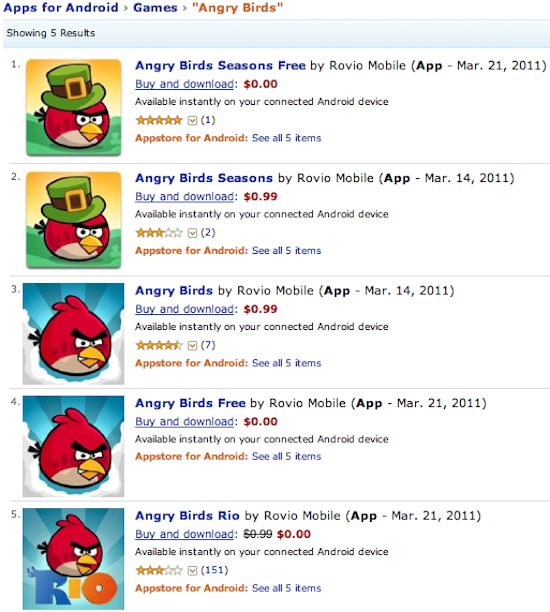 Amazon officially launched its Android App Store this morning, a separate store than Google’s own official Android Market. In order to stay ahead of other store fronts, Amazon’s front offers two draws: Test Drive, and a free app-of-the-day. Test Drive, in this case, is a fancy word for demo, as the option will allow users to demo nearly any Android app before making a purchase. The cool bit about these demos, though, are that they are demoed in the browser, running within an emulated instance of Android.

The free app-of-the-day is exactly what it sounds like, offering a daily free Android app, which will supposedly be a premium app. Today’s free app is the new Angry Birds Rio, to which Amazon also holds the exclusive rights, so the premium quality of their daily free app program is off to a good start. The reason why Amazon is able to give away premium quality apps is because they set the pricing of the software, not the softwares’ developers. If you also happen to be wondering why Apple allowed Amazon to get away with calling their app store the “App Store,” well, they didn’t, have are sued for trademark infringement. 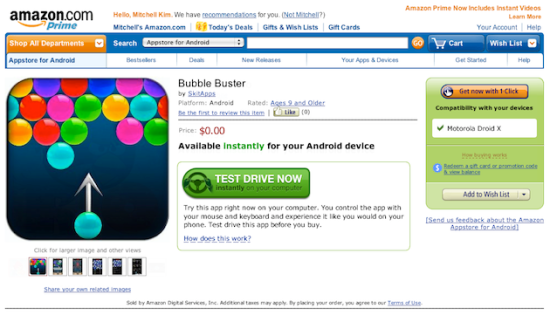 Note how the box on the right side shows a confirmed Android device, which is what led me to think the phone may have to sync up with the store. However, the issue is probably simple one of the launch day rollout, and the features will probably appear as the launch settles in.