Let the memes flow. (Okay, that was the only one.) 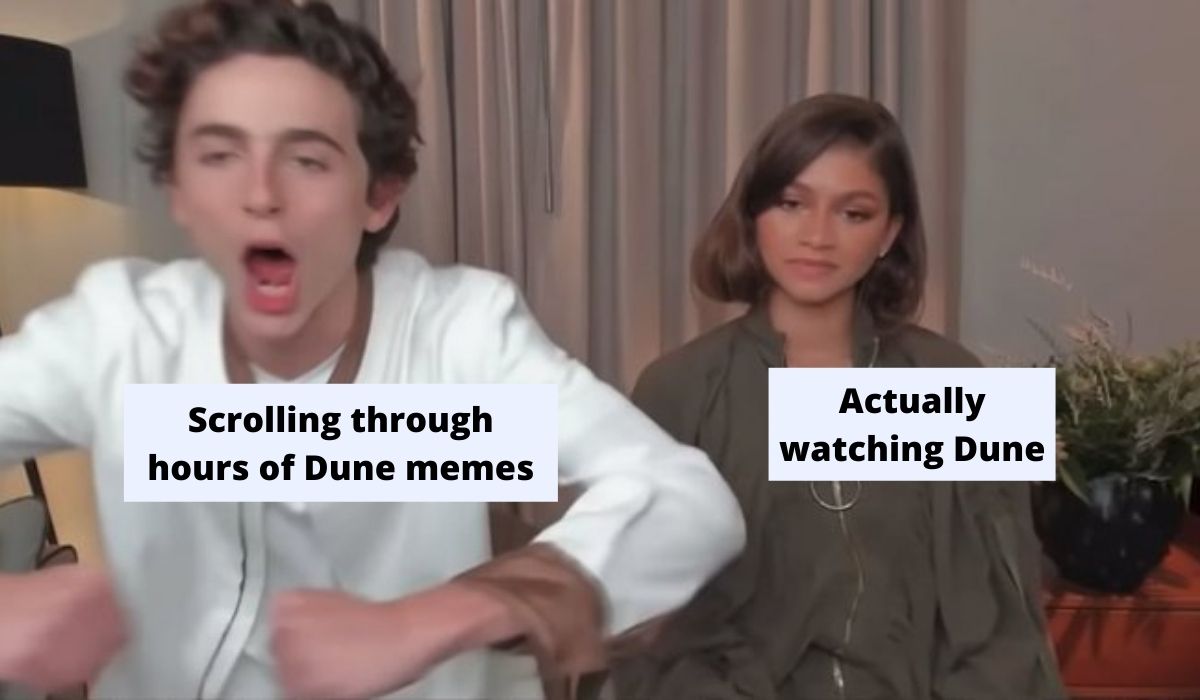 The very super serious science-fiction epic Dune is hitting theaters at a time we are all using memes to get through the pandemic. It’s the same psychological place we were in when the trailer dropped in September, the hype and final poster being Photoshopped online to add levity to the political hellscape we live in. Some of these memes definitely fall on the shitpost side of the internet, while others are inspired by moments of cast and crew speaking to the press. Let’s go through some of the various flavors together.

This is one of the few that requires a bit of context. In various interviews since Warner Bros. announced in 2020 that movies would be streamed to HBO Max for the first month due to the pandemic, Dune director Denis Villeneuve expressed his frustration—nothing new considering other directors like Patty Jenkins also thought their films were worth risking one’s life for. (This was back before vaccines.) Despite how much safer it would be for people to see films at home and the option for disabled moviegoers to adjust settings in image and text to enjoy movies, Villaneuve has stayed upset.

The most infamous of these quotes was “The way it happened, I’m still not happy. Frankly, to watch ‘Dune’ on a television, the best way I can compare it is to drive a speedboat in your bathtub.” So of course, upon release, people took to the internet to show the most offensive and cringey ways to watch Villeneuve’s Dune.

It’s hard to parse through what’s real and what’s edited, but that is missing the point entirely, so just enjoy.

finally got to watch Dune on my winnie the pooh panasonic disney tv the way villeneuve intended 🪱 pic.twitter.com/JE91TXe2Dx

Even those that did get out to seeing it in theaters joined in on the meme, like this person who did see it in the circumstances Villeneuve demanded and still didn’t have the best time.

seeing Dune in a theater (where the projectionist plays two scenes at the same time), as Villeneuve intended pic.twitter.com/kWHVCyagE1

Of all the press junket interviews (except maybe Remezcla’s with Oscar Issac) for Dune, it really has been Zendaya and Timothée Chalamet garnering the most attention. Partially, this is because they’re the young anchors for the story (even though Zendaya is barely in Dune: Part 1). However, also is the fact that their energies together are so relatable. While giving opposite energy, they appear to work well together, and that conflicting harmony is the main theme for the jokes.

getting hyped remembering i
about a new now have to
idea write it pic.twitter.com/w55JE2NNiM

Ones that you have to say out loud to really enjoy

These harken to specific fandoms and really require the appropriate intonation for the best effects.

What kind of meme roundup would this be if there weren’t at least one Shrek reference?

And finally … the meme that made me begin an obnoxious giggle fit in the lobby of a theater. When I went to go see A24’s Lamb for a review, I saw a Dune poster in real life for the first time … ever? I still hardly go out because people in Texas aren’t getting vaccinated fast enough and think masks are for the weak. Anyways, I saw the actual poster and heard myself reading it in the way the image below intended.

Made something I’m not proud of pic.twitter.com/2A8l6194A9

Also, I think this was the first one in this format or at least the first one I saw? It’s also something that the Friends Twitter account (a show only available on HBO Max, so … of course) got in on.

HOW YOU D̶O̶I̶N̶ DUNE? Grab your Joey special (two pizzas) and get ready – #DuneMovie is in theaters and streaming on @hbomax today. pic.twitter.com/Dv22D2Zcx9

Dune released on October 22 in theaters and will be on HBO Max for the first month.