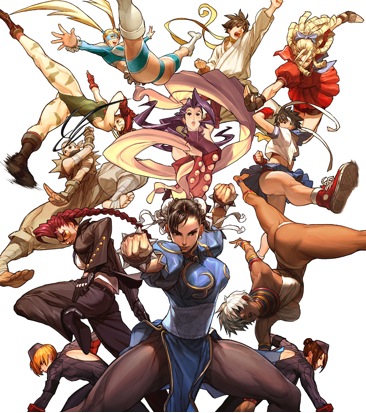 This month, the Street Fighter series turns twenty-five making a lot of us feel extremely old. To celebrate this mile-stone, Becky Chambers, our resident video game expert, and Amanda LaPergola, our resident Street Fightologist (a title Amanda has given to herself), have sat down for a series of chats about the nature, function, and cultural impact of the series.

This week, Becky and Amanda discuss the original Street Fighter, Street Fighter II, the questionable backstory of Cammy White, the decline of arcade culture and the merits of the 1994 live action movie (of which there are some). We join our heroines in an undisclosed chatroom…

Amanda: Alright! We are live!

Amanda: First of all, I want to check to see if links work in this. (Amanda sends Becky the following picture…) 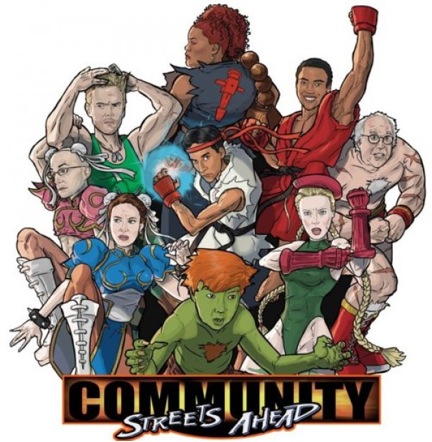 Becky: They work! I laughed heartily!

Amanda: It is the best thing I have ever seen in my entire life this week.

Amanda: My personal favorites are Abed and Troy as Ryu and Ken. That is true bromance distilled to its essence.

Becky: 1994. With Van Damme and Kylie freaking Minogue. Know what I realized afterward? That movie totally passes the Bechdel test.

Amanda: Does it really?

Becky: Yup. On two separate occasions, Cammy and Chun Li talk about something other than dudes. Granted, they’re talking about clothes and hair, but I’ll take it. 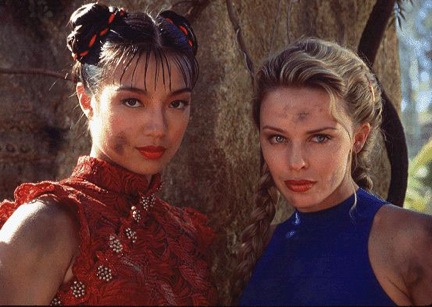 Amanda: I will admit, though, I kind of love Street Fighter: The Movie unironically.

Becky: You know, I have to say, for a bad movie, there’s a lot to love there.

Amanda: It’s really fun to watch. The 2009 Kristen Kreuk movie leaves a bad taste in my mouth, but the 1994 movie is just really awesome action camp.

Becky: Should I bother with the 2009 one, or should we pretend it never happened?

Amanda: What 2009 one? What are you talking about? Nothing happened that year.

Becky: You’re right. I have no idea what I was saying.

Amanda: I could talk about the 1994 movie (the only live-action Street Fighter movie that ever happened, what are you talking about?) all day, but we have 25 years of Street Fighter culture to get through this month.

Becky: That’s a lot of years.

Amanda: So, 1987: The original Street Fighter was released in arcades. That was a thing that happened.

Becky: I could not find a copy of the original to save my life.

Amanda: Nobody can. As far as I know, that game does not exist. I mean, it must have existed. People must have played it. But have you ever read or heard any fond recollections from people who played the original Street Fighter?

Becky: Apparently, there was a Capcom Arcade collection for PC released in 1999. But crazily enough, it is no longer in stores.

Amanda: As far as I’m concerned, Street Fighter II sprung to life independent of Street Fighter I fully formed, like Athena from the skull of Zeus. It’s that level of greatness.

Becky: I have to concur. What I was able to find was Street Fighter II Championship Edition. It did something to me, Amanda. I couldn’t stop playing. I also discovered that I am a lot better at video games than when I was in grade school, which is heartening.

Amanda: I’ve read somewhere that the best video games are easy to learn but difficult to master. That’s Street Fighter II in a nutshell.

Becky: That’s so true. The whole game is just one never-ending stream of trial and error. I remember feeling rather stupid as a kid for not being better at it. I mean, it was a stick and six buttons, how hard could it be?

Amanda: Six buttons was a lot of buttons back then.

Becky: True. Those were simpler times.

Amanda: I remember the first time I ever played I got my ass handed to me. Handed to me bad.

Becky: By the computer, or the other player?

Amanda: The computer. And I didn’t know any of the special moves. I just hit all of the buttons. I was an early masher.

Amanda: The beauty of Street Fighter lies in it deceptive simplicity. You can spend a lifetime just mastering one character’s move set and timing. Which of course would change ever-so-slightly in each iteration.

Becky: As a kid I’d always start playing as Chun-Li, because she was the only girl, and I wanted to be the girl. But then I’d get thoroughly owned, and I’d think, oh, well, maybe I should get one of the muscley guys instead. And I would still get owned, of course, because I was never sticking with her long enough to learn her moves.

Amanda: You can get owned even playing as the most powerful, muscley character. Street Fighter is the great equalizer. Speaking of Chun-Li, we cannot talk about Street Fighter and its influences without discussing her. 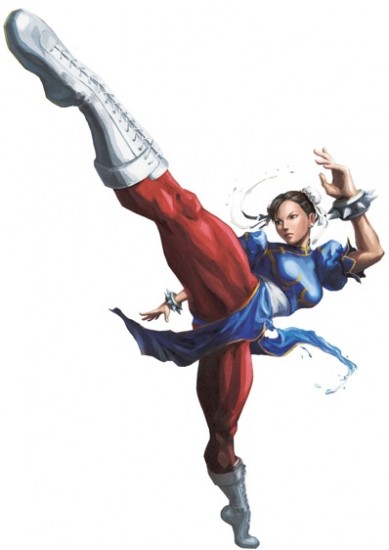 Becky: She’s the first female character in fighting games, which is…rather a big deal. And lack of pants aside, she’s actually pretty bad-ass.

Amanda: She paved the way.

Becky: You probably know this already, but do you know about how her ending changed?

Amanda: Oh, I was just going to say.

Becky: After you, then.

Amanda: For all the barriers that Chun-Li broke down, her original characterization was a bit…problematic.

Becky: When I first saw that ending, I facepalmed so hard. I was like, you just flew all around the world being an incredible bad-ass. You are the champion. And all you want to do is BE A YOUNG SINGLE GIRL?!

Amanda: “Now that I’ve avenged you, father, it’s back to short-shorts and BOYS!”

Becky: But what’s interesting is that they changed that ending in other games. Which means I wasn’t the only one who facepalmed.

Amanda: Well good. That ending sucks. By Super Street Fighter II, you get to choose Chun-Li’s ending. The only character with that option, in fact. So you can decide whether Chun-Li remains a cop or retires from fighting. And she’s still pretty bad-ass in both options.

Becky: I mean, the endings are basically the same, except in one she wears a jacket.

Amanda: Yeah, even when she’s out on the town, she’s still punching dudes.

Becky: I have to admit, I have a new-found appreciation for Chun-Li.

Amanda: She is arguably one of the most recognizable characters from the series. I would even go so far as to say that she is the series’ unofficial mascot.

Amanda: It’s debatable. Ryu is the official leading man of Street Fighter. He was the first playable character, after all. And I will admit to preferring him over many of the other male characters.

Becky: There has been a ton of Street Fighter fan art on Tumblr lately, because of the anniversary. And it consists of approximately 99.9% Ryu.

Amanda: Well, he is very iconic: the ripped gi, the flowing red head band, I get it. Believe me, I get it. But the character of Ryu has just become kind of one note. And yes, I am going to discuss character development in a fighting game. That is just how I roll.

Becky: That actually brings me to Cammy. 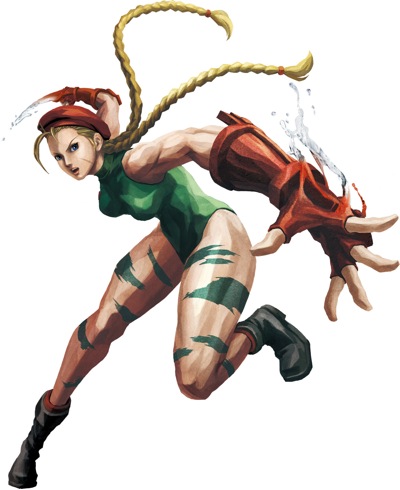 Amanda: I have to confess that Cammy is probably my favorite.

Amanda: Honestly, I have no idea. When I was a kid I thought she just seemed tougher than Chun-Li.

Amanda: Hang on, I’m trying to find the original artwork of Cammy that I first saw.

(Becky hangs on while Amanda does a Google image search)

Amanda: I had to sift through a lot of ass and nipple shots, but here it is: 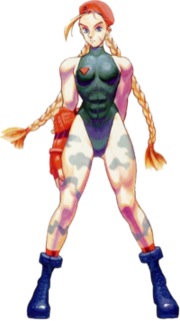 Becky: Is she wearing camouflage nylons?

Amanda: It’s leg paint, actually. Look, I know I am probably the only female Cammy advocate out there, but I like her. She’s bad-ass, she has a scar on her face, she likes cats. She’s awesome.

Becky: If you look at that picture from the waist up, she does look like she’s ready to wreck someone.

Amanda: And I just took her outfit as a Wonder Woman-style Leotard of Power.

Becky: Well, there are considerable amounts of abs on it. That’s a fair line of reasoning.

Amanda: I am jealous of those abs. You could grate cheese on them. They are convenient as well as attractive.

Becky: I never realized how practical muscles were.

Amanda: Van Damme can crack walnuts with his buttocks, and Cammy can grate a nutmeg without going to the drawer. Martial artists are just better people.

Amanda: Oh yeah. Cammy’s backstory. You probably don’t know this because you have not gotten into the Alpha games yet. Are you ready to have your mind blown?

Becky: I’ve got my helmet on and everything.

>>> NEXT PAGE: Amanda: So, before the storyline of Street Fighter II, Bison had an army of 16-year-old girls that he kidnapped from all over the world.