Why Do We Always Have to Wait for Queer Representation, Even If It’s Already Canon? 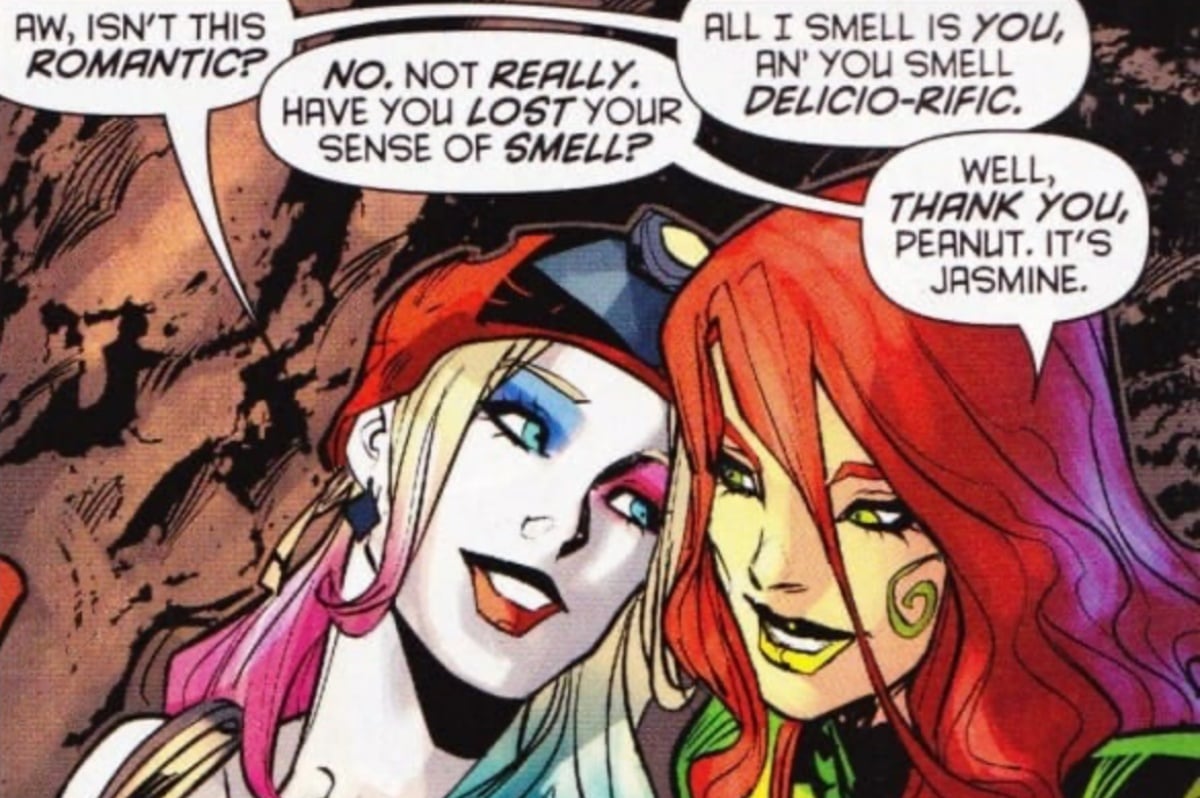 Without getting too deep into spoilers (you can check my review for more explicitly spoiler-y thoughts), in the first season of Harley Quinn, the two are painted as “best friends” who live together, and Ivy ends up dating (sigh) Kite Man (who is a real supervillain, apparently). The rationale for this choice is that Harley is just getting out of a relationship, and they wanted to explore that first before Harley and Ivy, so stay tuned for that.

During a recent interview with CBR, series creators Justin Halpern and Patrick Schumacker said they hope fans will be “patient” in waiting for it.

“Without giving too much away, that was something we wanted to explore,” Halpern explained. “I won’t tell you what happens. But yeah, that’s certainly was of interest to us.”

“Yeah. I mean, we do a lot of setting the table in Season 1 of just the world of the show,” Schumacker added. “If you are patient…”

“It was important for us in Season 1 to not get her out of a relationship and then suddenly get her into another one,” Halpern added. “We wanted it to just be about this self-discovery and not self-discovery in terms of how I validate myself through other people. In the first season, we sort of stay away from too much of her being romantically involved in anything.”

To be quite blunt: Why do we have to wait and see for a canonical queer relationship? The answer to whether Harley and Ivy will or will not happen is a yes or a no. Saying that it’s “of interest” to the creators doesn’t give me strong feelings, because how many times do we see creators (J.J. Abrams, the Russo brothers, Disney) say they are giving us queer representation, but you just have to be patient and wait for it?

That goes especially when they put an image of Harley and Ivy’s faces almost touching in the trailer in the most queerbaiting way possible.

And nothing will come of this in season one. (image: DC Universe)

Why are LBGTQ people expected to wait and be patient about this issue every single time? Harley and Ivy have been queer coded since their first girl-hangout in Batman: The Animated Series and have slowly been made canon. They are one of the few examples of a polyamorous queer female couple in comics that works. Their relationship has its own toxic elements, but they have also had a long-lasting relationship that is just as important to Harley as her relationship to the Joker, in terms of self-impact.

Yet, we’re expected to be alright with waiting. Now, don’t get me wrong; I understand why they don’t want Harley rushing from one relationship to another if they want this to be about her growth, but one of the aspects of Harley’s personality is that she is slightly codependent, and there are multiple ways she could be romantically close with Ivy and be like, “Hey girl can we just take things slow cause, you know, trauma?”

I know when it comes to shipping, some people have a sense that fans are being “entitled” and that no one is “entitled” to anything, and I do believe that. That being said, I don’t think it is having a sense of entitlement to ask why, after so many years of Ivy and Harley being canon, are they not prioritized in any adaptation of Harley’s story? Why is her relationship with the Joker, an origin that everyone knows, still the beginning of her journey as a character, and not something already in her past? Why is a queer woman still only being defined by her heterosexual relationship?

Asking those questions isn’t about entitlement; it’s about asking creators why, when they court queer audiences, do they constantly swerve away from putting it on the screen. Because without Harley and Ivy (and the allusion to Joker being in love with Batman), there are no gay relationships or characters on this show.

Plus, we can’t get Harley/Ivy, but we have Ivy and Kite Man? What in the heterosexual mess?