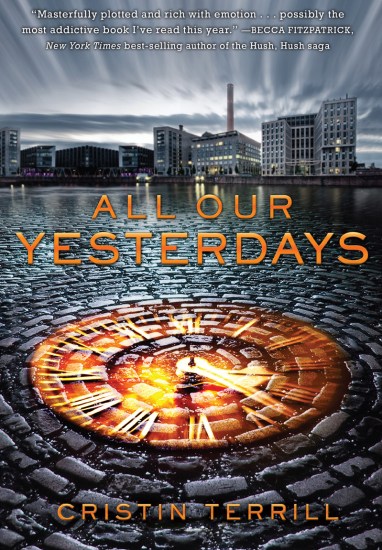 Cristin Terrill is promoting her debut young adult novel in a big way. All Our Yesterdays has been called a cross between The Terminator and The Time Traveler’s Wife but ahead of its release comes a prequel web series created with the help of some other very talented women. Hit the jump to find out more about the science fiction thriller and watch our exclusive episode!

“You have to kill him.” Imprisoned in the heart of a secret military base, Em has nothing except the voice of the boy in the cell next door and the list of instructions she finds taped inside the drain.

Only Em can complete the final instruction. She’s tried everything to prevent the creation of a time machine that will tear the world apart. She holds the proof: a list she has never seen before, written in her own hand. Each failed attempt in the past has led her to the same terrible present—imprisoned and tortured by a sadistic man called the doctor while war rages outside.

Marina has loved her best friend James since the day he moved next door when they were children. A gorgeous, introverted science prodigy from one of America’s most famous families, James finally seems to be seeing Marina in a new way, too. But on one disastrous night, James’s life crumbles apart, and with it, Marina’s hopes for their future. Now someone is trying to kill him. Marina will protect James, no matter what. Even if it means opening her eyes to a truth so terrible that she may not survive it. At least not as the girl she once was.

All Our Yesterdays is a wrenching, brilliantly plotted story of fierce love, unthinkable sacrifice, and the infinite implications of our every choice.

Before you watch part three below, you may want to catch up with parts one and two of the prequel.

There’s still one more prequel webisode to go but the book has already been optioned for a film by Global Produce and Gold Circle Films. Find out more on Terrill’s website.

All Our Yesterdays will be released by Disney-Hyperion on September 3rd.