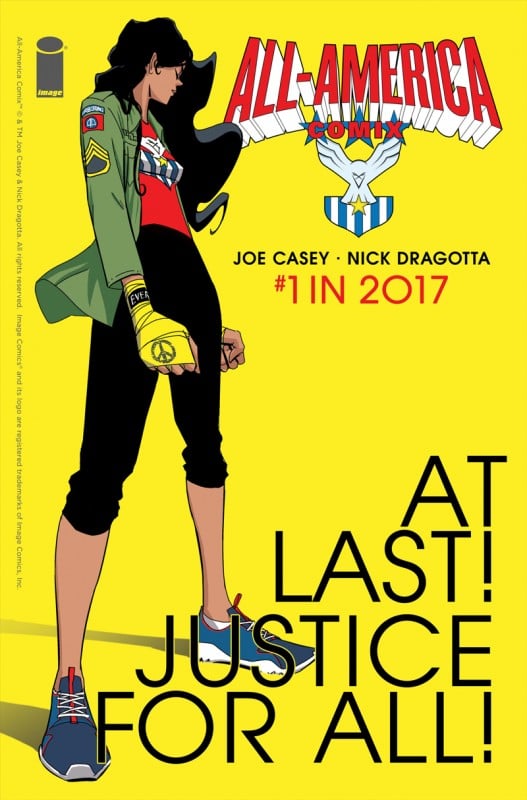 The creators behind America Chavez (aka Miss America from Young Avengers, Vengeance, among others) have set out on their own away from Marvel, creating an uncannily similar character named America Vasquez. In conjunction with Image Comics, Joe Casey and Nick Dragotta have developed a brand new comic book series titled All-America Comix, coming in 2017. Starring in the comic is America Vasquez, billed as “a superpowered champion of the oppressed,” according to the press release sent to The Hollywood Reporter. The full release states:

You wanted it! You got it! She is a hero for our time — and the time is NOW! A superpowered champion of the oppressed, AMERICA VASQUEZ is the one you’ve been waiting for! And this may be her greatest adventure of all. When she is confronted with the hidden secrets of the universe, you won’t believe the cosmic truth she uncovers! Issue #1 hits — and we do mean HITS — in 2017 from Image Comics!

Beyond name and heroic description, the similarities continue to be uncanny. Just looking at the comic book cover, it’s easy to see that she also bears a physical resemblance to the Marvel super heroine, though with perhaps just a little less red, white, and blue in her outfit. That lack of American-flag coloring is made up in Vasquez’s really sweet OD-military jacket/shirt piece.

As well, her appearance in this brand new series for Image Comics is no accident; it seems that because Marvel has been so reluctant to give Miss America her own series, Casey and Dragotta took matters into their own hands, creating the spiritual successor to her character elsewhere. The fact that Marvel seems to be dragging their feet with Miss America is disheartening. Fans have been clamoring for a Miss America solo book for quite some time now, but there hasn’t been a single peep about that possibility in what feels like, well, ever.

Their loss is Image’s gain. We need more women of color in super heroine roles, that’s for darn sure. You can bet we’ll be checking out All-America Comix when it hits shelves in 2017.