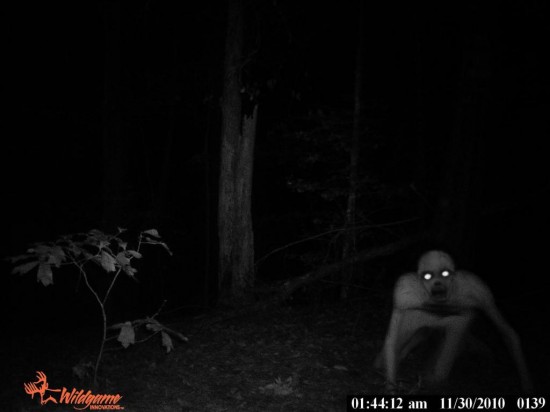 Supposedly captured by a deer stand camera set up in Berwick, Louisiana, a photo of this freaky monster thing has been making the rounds today, even appearing on a short local NBC segment (video posted after the jump). The hunter who discovered the photograph claims it’s real, and also claims his camera was broken, but the memory card that contained the photo was left unharmed.

Another possible theory includes a person dressed up in a costume, with the arms photoshopped to look thinner than a regular person’s arm. Also, the legs of the deer in the second picture displayed in the news segment look fairly similar to the arms of the monster, which may suggest that if the monster was photoshopped, animal limbs were used for the oddly-thin arms.

Though the monster is most likely fake, it’s still fun (or terrifying?) to wonder.